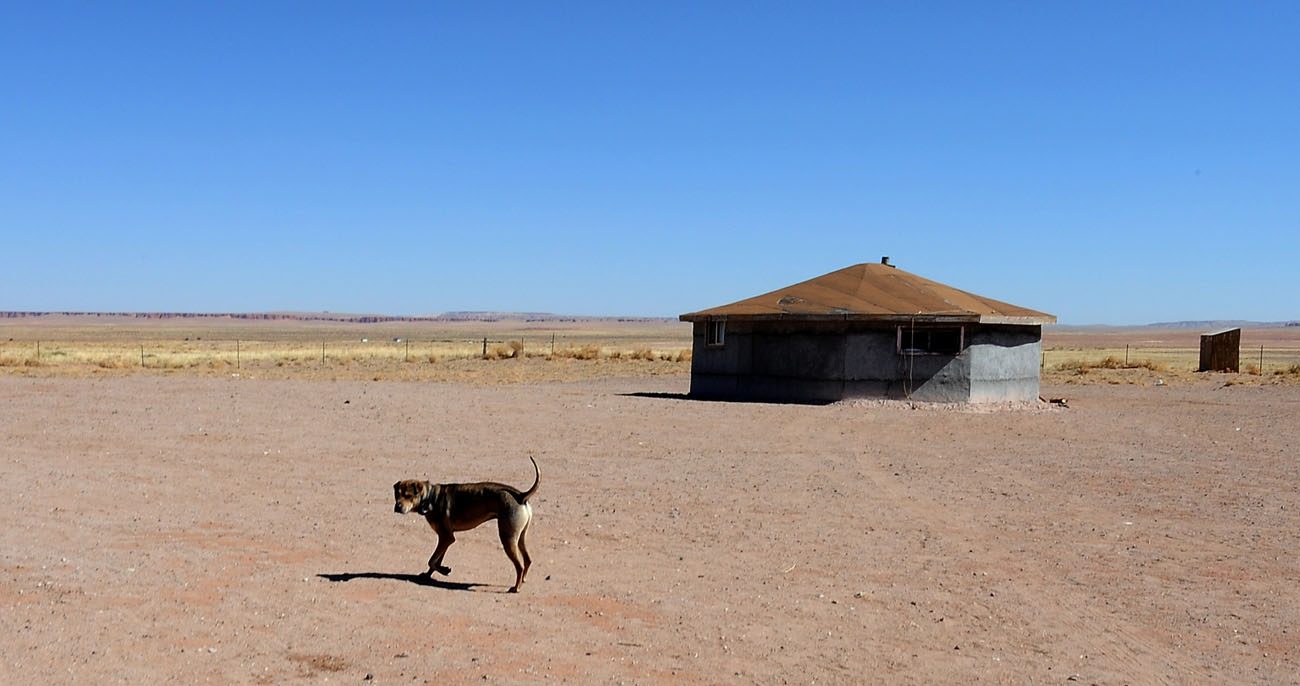 A dog is seen on the Navajo Indian Reservation near Flagstaff, Ariz., in this 2011 file photo. (CNS photo/Mike Nelson, EPA)

WASHINGTON (CNS) — Life on American Indian reservations is bad and shows few signs of getting better anytime soon, according to two speakers Feb. 4 at the Catholic Social Ministry Gathering in Washington.

“Today, Indians are the poorest of all American ethnic groups,” said Father Michael Carson, a Choctaw Indian who is assistant director of Native American affairs for the U.S. bishops’ Secretariat for Cultural Diversity in the Church. “The suicide rate is 27 times the national average.”

“Nowhere is this better illustrated better than the Pine Ridge Reservation in South Dakota,” Father Carson added. “Unemployment, substandard housing, drug and alcohol addiction, rape, child abuse. The list seems endless,” he said. “Why is this happening? What can be done about it?”

The history of the maltreatment of Indians date back to the earliest colonizers from Western Europe. Reports of enslavement and forced conversions with the threat of loss of land if defied had reached pope, who issued instructions to stop the practices. They were routinely ignored, according to Father Carson.

The maltreatment continued upon the founding of the United States of America. An 1823 Supreme Court case gave the young nation “the power of dominion over the unoccupied lands,” a power that had previously belonged to England, Father Carson said.

“Indians had only the right of occupancy of the land. In short, ‘It is our land, but we share it with you, as equals,’ and ‘It is our land, and you can be here until we decide we need it.’ Indians didn’t become U.S. citizens until 1924,” the priest said. “Citizens have a lot more rights in terms of decision-making and also the rights of holding property.”

The United Nations Declaration of Human Rights, which the United States signed, includes “the right to be free of genocide, of the forcible removal of ethnic identity; the right to the land they first occupied, and the right to make decisions that affect indigenous people,” Father Carson noted.

Rich May, a Houston-based national lecturer on issues facing American Indians, recommended that to remove obstacles to economic growth on reservations, “Indians must be allowed to develop their natural resources in ways that respect their own views of the environment, and to use land as collateral to start their own businesses.”

May said many Indians live in trailer homes and do not bother to keep them up because they have no incentive since they do not own the land underneath the trailer.

When May visited Pine Ridge last July, “what I saw was beyond anything I could have expected,” he said. “It was an affront of human dignity. It’s impossible to imagine.”

At “what passes for a grocery store,” there is “all processed food” inside, with no fresh fruits or vegetables, May said. At a reservation high school, he added, “there was asbestos hanging from the ceiling. Only now are they getting to that. How long have we known (about asbestos’ dangers)?”

“Are our students’ lives getting any better? No, they are not getting better. In fact, they are getting worse,” he said. “You can’t be educated in a school, in my opinion, when some students come to school with no coats and maybe one shoe.”

Education reform was another plank in May’s improvement agenda, with “school standards raised and native traditions and languages preserved,” he said.

Other suggestions, which he acknowledged may need 15 to 20 years to take full effect, would be to improve social services, phase out both the federal Bureau of Indian Affairs and Bureau of Indian Education, and phase out the trust system, thus enabling tribes to manage their own land.

“Give the land back to the Indians,” he said. “For goodness sake, we took it from them!”