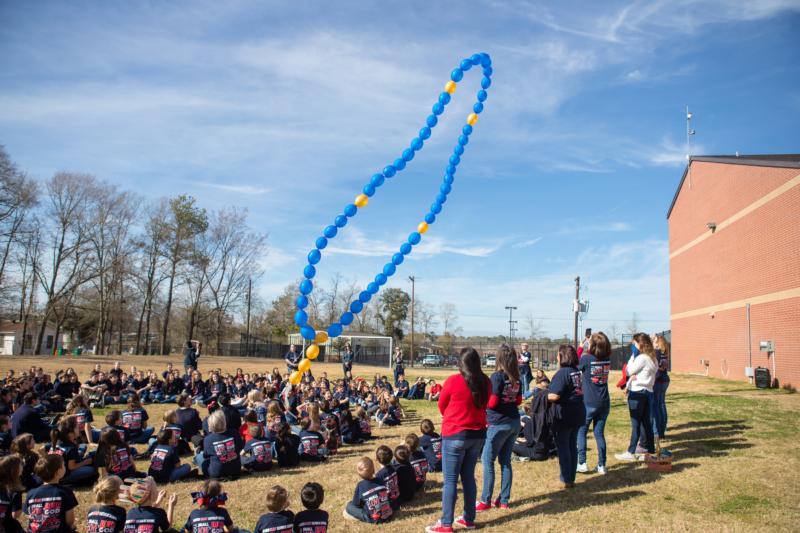 During Catholic Schools Week Jan. 28-Feb.3, eighth-grade students at Sacred Heart Catholic School in Conroe, Texas, release a balloon rosary Jan. 30 after praying a living rosary in the school field in honor of Vicky Tannos, a former teacher who died from cancer in 2017. The school was to originally honor Tannos in 2017 but Hurricane Harvey delayed the services. (CNS photo/James Ramos, Texas Catholic Herald)

CONROE, Texas (CNS) — Under a bright blue sky, students at Sacred Heart School in Conroe gathered to pray a rosary for a special intercession.

Located 45 miles north of Houston, the school hosted a playground-side memorial service to celebrate and intercede for the life and soul of Victoria Tannos, a former schoolteacher who died of colon cancer in 2017.

Two of Victoria’s children, Justin Tannos and older sister Grace Tannos, held onto the blue and yellow balloon rosary with the rest of Justin’s eighth-grade class.

Though emotions were high for much of the school staff and faculty — many wiping tears between prayers, and at times the siblings embracing — the two were smiling after they let the balloons fly high into the sky after the closing prayer.

“Just being able to honor my mom in a different way and remember her in the place that she always was and (my siblings and I) were always taught together,” she told the Texas Catholic Herald, newspaper of the Archdiocese of Galveston-Houston.

Grace said praying the rosary reminded her of going to church with her mother. Victoria’s family also was in attendance, standing next to a smiling portrait of the veteran teacher.

Husband Paul Tannos said the school community became a second family for them, during Victoria’s cancer treatment and death.

“It was very nice to honor (Victoria),” he said. “She loved this place, she spent a lot of time here, she loved all the kids and everything else, so it was nice of them to leave a permanent reminder of her behind.”

School principal Deb Brown said, “Mrs. Tannos was a loving wife, a fierce mother, a dedicated daughter, a loyal sister, supportive friend, and an encouraging teacher. Mrs. Tannos confronted her illness with courage and bravery and served as a role model for students when faced with such a challenge. However, God had other plans for Mrs. Tannos’ life.”

The school planted a maple tree near the playground as a “reminder of Mrs. Tannos and the many young lives she touched at Sacred Heart over the years.”

Victoria taught throughout her cancer treatment, said Brown. “Every child in the fifth- through eighth-grade, she has taught” during her 10 years at the school.

Brown saw the memorial service as a reflection of Catholic education, especially during Catholic Schools Week Jan. 28-Feb. 3. The students all knew the rosary, how it’s a prayer for everything in life, in sickness, in celebration, or for the end to injustice like abortion or to honor Mary, she said.

The service — which saw the balloon rosary fly freely for the first time, the last two attempts during recent Catholic Schools Weeks ended in the trees or the school’s weather vane — also helped students see the parts of life, she said.

The day’s events, which began with morning adoration, were part of the school’s five-day celebration of Catholic education during Catholic Schools Week, including Mass with grandparents, acts of service, vocations and teacher-versus-student athletics.

At the start of the service, Brown focused on the end of life, reading from the Gospel of John: “Do not let your hearts be troubled. Believe in God, believe also in me. In my Father’s house there are many rooms. If it were not so, would I have told you that I go to prepare a place for you? And if I go and prepare a place for you, I will come again and take you to myself. That where I am, you may be also and you know the way to where I am going.”

“(Mrs. Tannos) won’t ever be forgotten,” Brown said, “but we wanted to be able to send her off the right way for our children to see the cycle of life.”

PREVIOUS: Faith an essential part of story for real-life heroes of ’15:17 to Paris’

NEXT: Cardinal Tobin: Christians must recognize humanity of immigrants, refugees