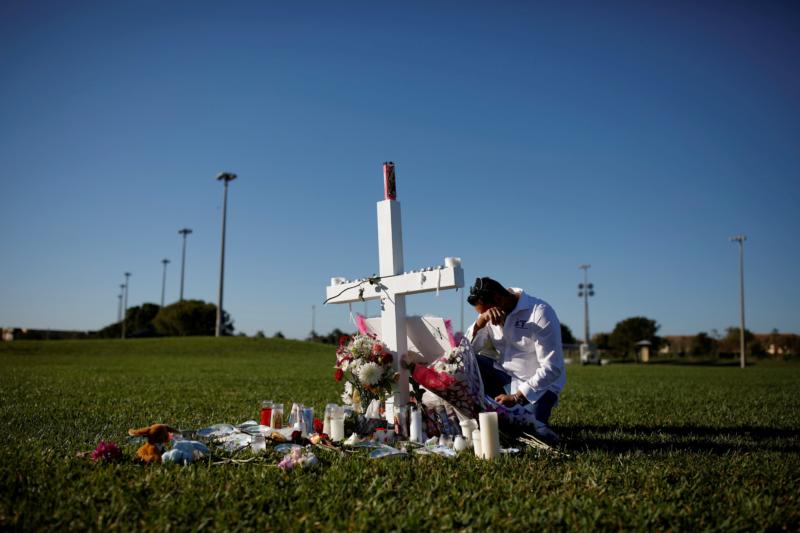 Joe Zevuloni weeps Feb. 16 in front of a cross placed in a park to commemorate the victims of the shooting at nearby Marjory Stoneman Douglas High School in Parkland, Fla. At least 17 people were killed in the Feb. 14 shooting. The suspect, 19-year-old former student Nikolas Cruz, is in custody. (CNS photo/Carlos Garcia Rawlins, Reuters)

WASHINGTON (CNS) — Philadelphia Archbishop Charles J. Chaput knows all too well the pain left behind after incidents like the 2018 Valentine’s Day shooting that has so far taken 17 lives at Florida’s Marjory Stoneman Douglas High School in Parkland.

As archbishop in Denver, he took part in the funerals of Catholic high school students killed by fellow classmates at Columbine High School almost two decades ago. The Feb. 14 Florida killings, which authorities suspect were perpetrated by Nikolas Cruz, a former classmate of many of the dead, seemed to bring back the pain of April 20, 1999.

“I sat with the parents of children murdered in the Columbine High School massacre, and buried some of their dead,” Archbishop Chaput said in statement released a day after the Florida high school shootings. “Nothing seems to change, no matter how brutal the cost. Terrible things happen; pious statements are released and the nation goes back to its self-absorbed distractions.”

The Washington Post reported Feb. 15 that an analysis of online archives, state and federal enrollment figures, and news stories revealed that “more than 150,000 students attending at least 170 primary or secondary schools have experienced a shooting on campus” since the massacre perpetrated by senior high school students Eric Harris and Dylan Klebold at Columbine.

Having seen what a community goes through after such large-scale killings, the archbishop said two things are needed.

“We need to pray for the victims and their families because — as I witnessed firsthand at Columbine — their suffering is intense and long lasting,” he said. “And we need to be angry: angry at our lawmakers for doing so little to prevent these catastrophes.”

He also unleashed criticism at “media” who are “feeding off these tragedies and fueling them with a steady stream of sensationalism and moral incoherence,” but also at the general public “for perversely tolerating these things, and then forgetting them until the next round of violence.”

Chicago Cardinal Blase J. Cupich, whose city often tops or is at the top of lists of U.S. cities with a high incidence of homicides, also weighed in after the Florida killings, noting in a Feb. 15 statement that it marks “the 18th time in this short new year” that the nation has seen a school shooting, and called on others to “join in prayer and sorrow at an act of madness carried out in what should be a safe haven, an American school.”

“These victims have been robbed of their futures, but so have their parents, classmates and our nation,” said Cardinal Cupich. “Yes, we ask God’s blessing on the families of the victims, their classmates, teachers and community. We owe them that as we help them carry the burden of their suffering.

“But, when it is so clear that direct action can be taken to prevent another day like this one, we cannot stand by and shrug our shoulders. Let us extend a hand to those suffering alienation and illness and help them find understanding, treatment and peace.”

Cardinal Cupich placed responsibility on lawmakers to make a change.

“Let us make it clear to our elected officials that the weapons and ammunition that facilitate this carnage have no place in our culture. We owe it to our children to protect the cherished freedoms so many have fought and died for: to worship, learn and work in safety,” he said.

“That is true patriotism. Leaders in our country, who are in a position to make meaningful changes, need to hear the cries of the wounded and bereaved and open their hearts to the possibility of peace,” he added. “Let us work and pray to that end.”