Wheelchair charity run by immigrants helps the most vulnerable 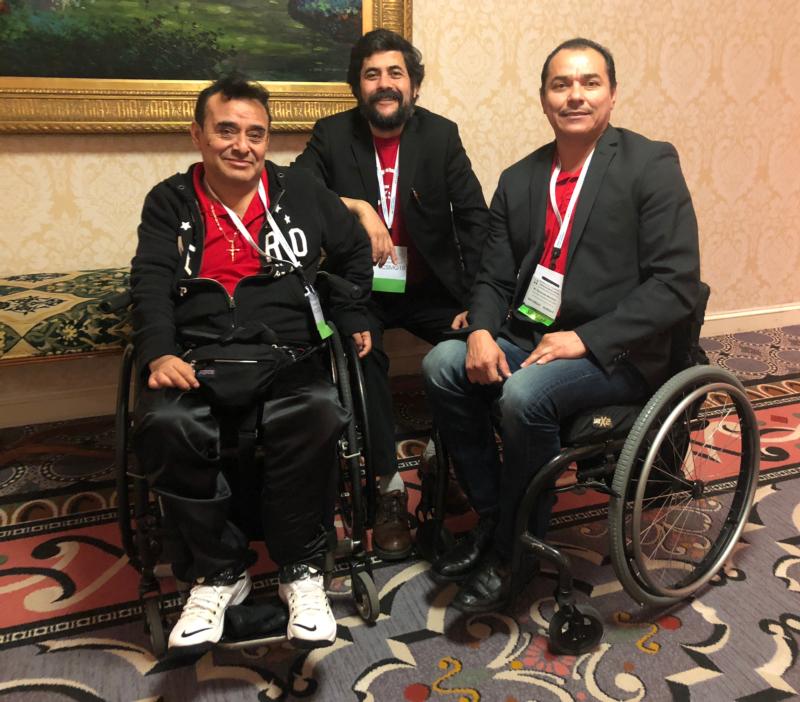 WASHINGTON (CNS) — Among the many inspiring stories heard by those who attended the 2018 Catholic Social Ministry Gathering, the tale of the Living Hope Wheelchair Association stood out for its compassion and resilience.

Many went out of the way to pat or shake hands with the three men in wheelchairs who represented the Houston nonprofit during the Feb. 3-6 gathering in Washington.

Their group supplies wheelchairs and vital medical equipment to low-income immigrants with spinal-cord injuries and other disabilities. Many of those who receive help from the group have no other way to secure the equipment because they lack legal permission to be in the United States, which also prevents them from receiving help from any social safety net government programs.

“We said we’d never leave behind anyone who asked us for help,” said Noe Ramirez, the association’s board president, in a Feb. 4 interview with Catholic News Service.

When someone suffers a debilitating injury, life can take a difficult turn, particularly if the person has no money and no way to deal with the mounting costs that follow a life-altering event, said Ramirez. He knows that reality well because he lived it when a drunk driver ran him over as he went to work on his bike and, in an instant, he became a quadriplegic.

Some of those events can lead people to take their own lives, he said, and the organization wants to show them the lesson members of the group work hard to teach one another: Even after tragedy, life continues.

Each month, the group provides about $400 in assistance to between 60 and 80 active members. They receive catheters and other medical equipment they might need, bus tickets, beds, wheelchairs and help with any other necessities that may arise.

They turned the tragedy into an opportunity, not just to help themselves, but anyone who needs and asks, including U.S. citizens and residents who may not qualify for other aid for any number of reasons. In all those years, “we have never lacked anything,” Ramirez said, and he credits that to the prayers and thanks the group offers when they meet to figure out who needs help and how they’re going to provide it.

Some warned the men not to get involved and to keep a low profile, afraid that immigration authorities would come after organizers and some of the people who receive help, Ramirez said, but they forged on and went on to obtain a special tax status so the organization could receive donations and establish office space to carry out its work. The association accepts online donations at www.lhwassociation.org.

For its efforts, the Catholic Campaign for Human Development, which has financially supported the work, honored the association with the Sister Margaret Cafferty Development of People’s Award this year.

Raymundo Mendoza, a board member who became part of the association after falling from a tree, said it’s hard to count the number of times the work of the association has brought about happiness. He remembers when a woman called asking for urgent help. He was tired but decided to take over supplies she desperately needed.

“I was tired, but my heart … it was so happy when I was able to see that another person wouldn’t be suffering that day,” he told CNS. “They’re so grateful and they lift the weight of your heart.”

But there’s another message the association wants the public to know, Ramirez said, and that’s that immigrants come to the U.S. to work and help, not to take resources away from others.

When someone asks the association for help — including U.S. citizens and residents — “we don’t judge, we try to let them know that we won’t leave anyone behind,” Ramirez said. And like other immigrants, their goal is to contribute to a better society for all in their midst, he said. Aside from advocating for people with disabilities, the group also has been involved with advocating for better treatment of immigrants and to change negative perceptions others may hold.

“We want people to see, that even though we can’t get around much, we do what we can to help others,” Mendoza said. “We want to help the suffering.”