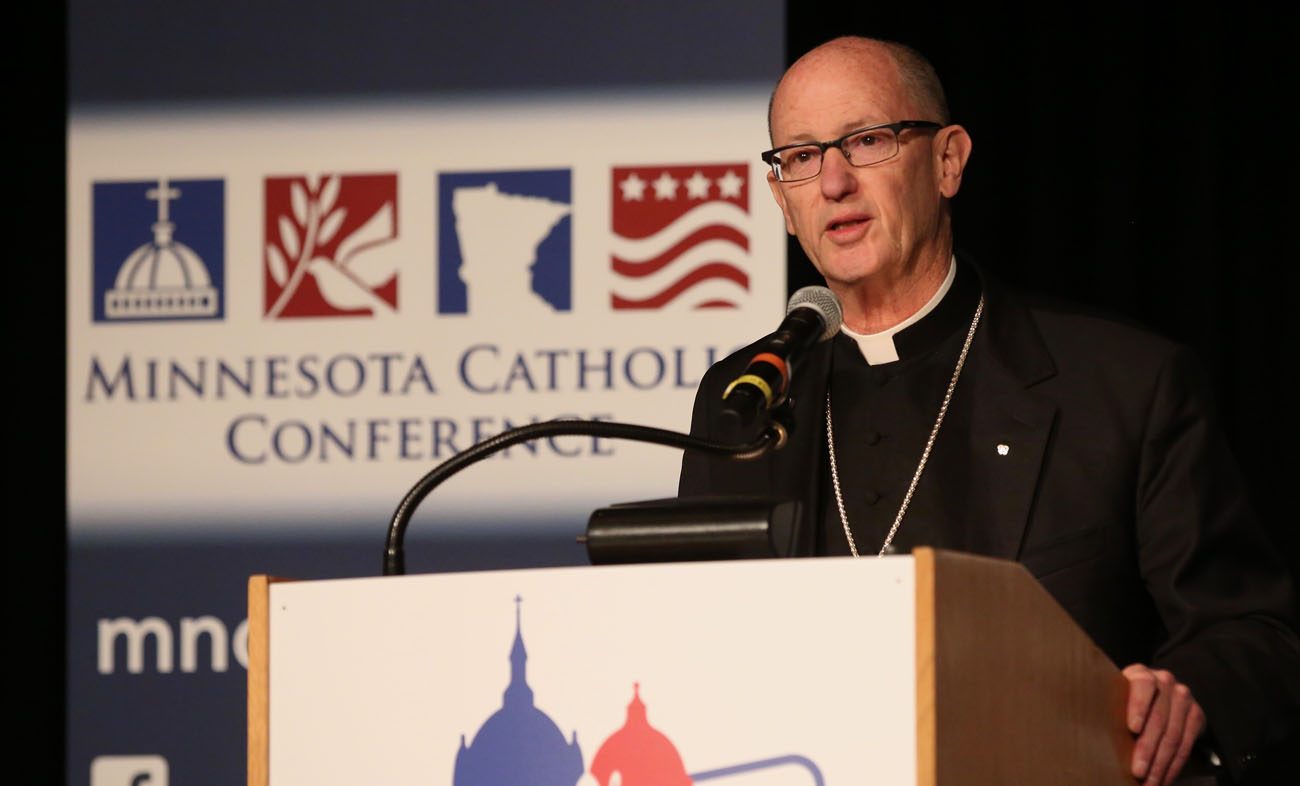 Bishop James D. Conley of Lincoln, Neb., speaks in 2017 at Catholics at the Capitol in St. Paul, Minn. Bishop Conley is chairman of the U.S. bishops' Subcommittee for the Promotion and Defense of Marriage. (CNS photo/Dave Hrbacek, The Catholic Spirit)

WASHINGTON (CNS) — In December, Bishop James D. Conley of Lincoln, Nebraska, chairman of the U.S. bishops’ Subcommittee for the Promotion and Defense of Marriage and three other Catholic bishops joined several other religious leaders in signing an open letter titled “Created Male and Female” about the inherent beauty and dignity of God-given sexual identity.

They described as “deeply troubling” the movement today “to enforce the false idea — that a man can be or become a woman or vice versa.”

“We acknowledge and affirm that all human beings are created by God and thereby have an inherent dignity,” said the letter. “We also believe that God created each person male or female; therefore, sexual difference is not an accident or a flaw — it is a gift from God that helps draw us closer to each other and to God.

In early February, Catholic News Service interviewed Bishop Conley about what prompted the religious leaders to issue the letter, what its main message is and what response it has received. Here are the questions and his responses:

Q: What prompted the writing of the joint statement “Created Male and Female”? What are the social trends that make it important for religious leaders to speak out on gender and sexual identity issues today?

A: The letter was prompted by the shared concern of these religious leaders that respect for sexual difference is decreasing, as more and more individuals declare themselves to be a gender other than their bodily sex. This false belief of a relatively few individuals has been raised to a heightened level of publicity through social activism and an aggressive push for special recognition and rights. At the center of this activism is a rejection of the truth about human sexuality and the goodness of our bodies: that we are created male and female and ordered toward relationship with one another.

Gender ideology is problematic, as Pope Francis has said many times, not only because it is untrue, but because it generates confusion for an entire culture and for many vulnerable persons in it. It is of great pastoral concern. As pastors and leaders, we receive many questions and concerns from our faithful people about these issues and we want to respond with charity and clarity.

Q: How would you sum up the main message of the letter?

A: The main message of the letter is that God has created humanity as male and female, and this is a good thing. Indeed, God said it is very good. Sexual difference is a gift, and teaches us something about who we are and what we are called to. God created every human person with an inherent bodily dignity.

The secondary message of the letter is that those who identify with a gender other than their biological sex, are to be loved and accompanied, all the while helping them to question this idea they have about themselves and the messages they hear from the culture. They are always to be treated with compassion, mercy and honesty.

Q: What was the process that led up to it? How long did it take and how was input gathered among the diverse group of signatories?

A: The signatories are a group of religious leaders who have been meeting on a somewhat regular basis for many years. Our first gatherings centered on the reality of marriage as the union of one man and one woman, and this topic followed naturally from that. The process involved discussion and draft revisions until the signers were all happy with a final version. The process was shared and I’m grateful to have been a part of it. I’m particularly thankful for the opportunity to meet and grow in friendship with leaders of many other faith traditions.

Q: What has been the reaction to the letter: expressions of support as well as criticism? Do you expect there to be any follow-up?

A: There have only been a few negative reactions, which were, as to be expected, from people with different perspectives. We do not expect there to be any immediate follow-up, but are open to offering further guidance when requested. I can’t speak for others, but my main concern is for those who are caught in the middle of these issues, especially children and families who are asking for direction and looking to me and other faith leaders for authentic pastoral care.

Q: Surveys as well as anecdotal evidence suggests that young people, including Catholics, have a harder time understanding the Catholic Church’s position. They may see gender fluidity and related issues as more a matter of individual choice or a matter of fairness. The same might be said for young people’s attitudes toward same-sex marriage. How would you as a Catholic shepherd respond to a young Catholic person who asks why the church seems to care about what individuals do on these matters? Is this issue becoming similar to same-sex marriage, where Catholic leaders may feel they are swimming upstream transmitting church teaching upholding traditional marriage when society at large seems not to have a problem with it?

A: You know, I spend a lot of time talking to young people, and I don’t think that surveys and other anecdotes always do them justice. Young people long for the truth about themselves, about their bodies and about the world around them. And they respond when you take the time to go deeper with them on these issues. Many young people have understood and embraced the Catholic Church’s full teaching about the human person, and they want to live in that truth.

The problem is that in our culture, young people are trained to want a soundbite; they are often entrenched in opinions which were formed, in large part, by the media or culture, and not really considered with the full weight and rigor of their reason and intellect. Young people today have been taught to be on guard against exclusion or prejudice, and that’s a good thing. Unfortunately, this impulse can lead to a blind acceptance of manipulative slogans that claim to be for equality and inclusion, but in fact are redefining what it means to be human. So, when I talk to young people (or anyone) about why the Catholic Church cares so much about this issue, the bottom line is that Jesus cares about you. Jesus loves you with unconditional love and wants what is truly best and good for you. Understanding who God is and who you are as a human being and a child of God is central.

The struggles surrounding sexual identity are similar to attitudes about redefining marriage. In order to understand what marriage is, we have to understand the nature of the human person, what it means to be created male or female. Sexual difference is that which allows man and woman to be united in marriage and to bring about new life. This is clear throughout the Sacred Scriptures and it is written into our very being.

Q. During the run-up to the Supreme Court decision legalizing same-sex marriage across the country and afterward, certain segments of society are claiming people who don’t agree with same-sex marriage are “bigots.” How can the church respond to that charge?

A: The Supreme Court did what they have no right to do: they redefined a human institution that existed long before our government was ever established. However, one of the justices himself noted that good people in this country would continue to believe that marriage is the union of one man and one woman, and that those people are not motivated by animus or hatred, but rather by a strong conviction about humanity. Therefore, we cannot be considered “bigots.” It is ironic to observe how a call for tolerance can lead to such intolerance. The move to use such labels as “bigotry,” is deeply hurtful and disrespectful. This is an example of what Pope Emeritus Benedict referred to as the “dictatorship of relativism.” If this trend is not addressed adequately, our nation runs the risk of excluding and marginalizing people of faith and forgetting that religious freedom is our first freedom.

NEXT: Wheelchair charity run by immigrants helps the most vulnerable