Acknowledge sin, but look for signs of God at work, pope tells priests 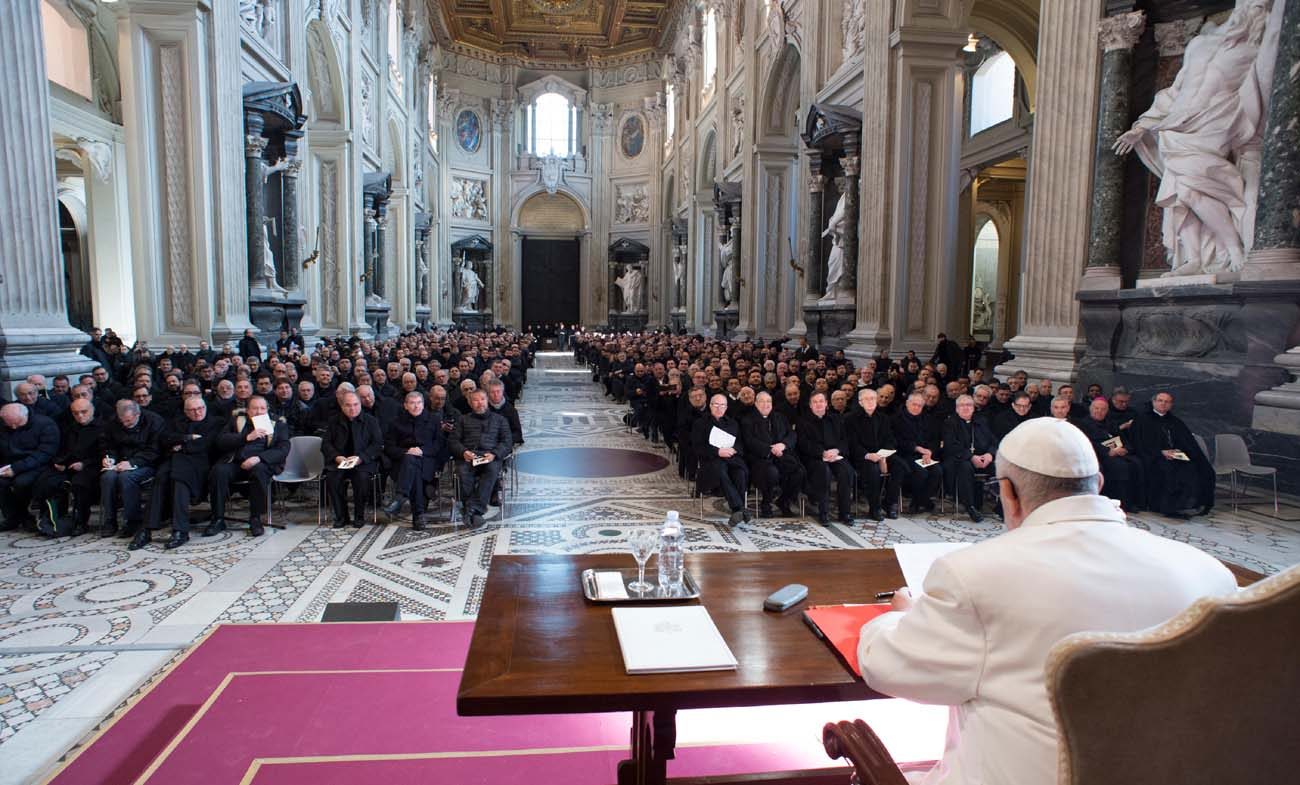 ROME (CNS) — While it is true that the world is full of sin and sinful behavior, priests must learn to scrutinize the “signs of the times” for new trends and attitudes that are good and healthy and holy, Pope Francis told pastors from the Diocese of Rome.

While there is “moral conduct that we aren’t used to seeing,” such as the normalization of living together before marriage, there also is a greater awareness of human rights, a push for tolerance and equality and appreciation for the values of peace and solidarity,” he said Feb. 15.

“We should not be frightened of the difficulties, but discern the signs of the times, the things that come from the Spirit” and then “help with the others,” he said, according to RomaSette, the diocesan newspaper.

As is customary on the day after Ash Wednesday, Pope Francis spent the morning with the pastors in the Basilica of St. John Lateran, the Rome cathedral. The session began with a penitential liturgy and with the pope spending almost an hour hearing confessions.

Afterward, he responded to some of their questions. The event was closed to the press, although the Vatican Media website and RomaSette provided some information later in the day.

The questions were submitted by groups of priests according to how long they had been ordained.

The younger priests asked how they could fully live their vocation. Pope Francis has three recommendations: first, learn to balance commitments; second, “find your own style”; and finally, spend time in private prayer and find a good spiritual director with whom to talk over what arises in prayer.

While forgiveness always is available, the pope said, a person needs to learn how to examine the things that lead to sin in their lives and, especially for that reason, a mature spiritual guide is necessary.

To priests who are 40 to 50 years old and have been ordained a bit longer, Pope Francis said theirs is a time when ideals tend to become weaker and when the weight of ministry and administrative duties start to be felt.

The approach of middle age is a time of “many temptations,” he said, but also the time of a “second calling from the Lord,” a call to greater realism about ministry and greater maturity.

“One cannot continue without this necessary transformation because if you keep going like this, without maturing, making a way for crisis,” the pope said, “it will end badly. You’ll end up living a double life or leaving everything.”

The older group of priests, those ordained more than 35 years ago, asked the pope about handling change, saying “we cannot always draw on our experience to respond to new questions” raised by society. They also asked the pope how he handled that mature phase of his ministry.

While the pope said he understood their unease with the fast-changing culture, he insisted that what people need most today are things they are more than able to provide: a smile, a listening ear and “offering pardon without condition in the sacrament of reconciliation.”

Elderly priests, he said, know the trials of life and the difficulties and pain that people experience. They don’t have to talk much, but they should listen a lot.

In his own life, when he faced big changes in his ministry, he told the priests, what helped most was to spend more time in prayer and adoration before the tabernacle.

NEXT: Catholic physicians’ leader warns of threats to conscientious objection