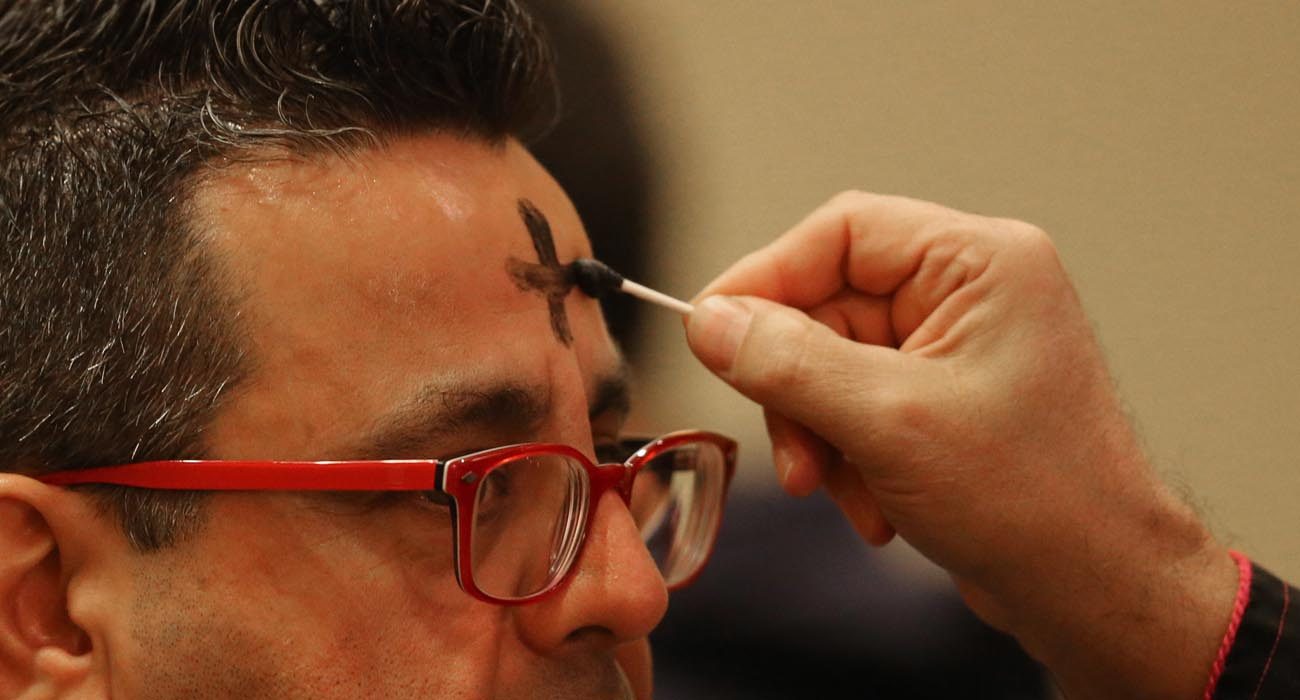 A man receives ashes during Mass Feb. 12 at Our Lady of Lebanon Maronite Church in Washington. In the Maronite Catholic Church, ashes are distributed on Monday, two days ahead of the Latin rite's traditional Ash Wednesday distribution. (CNS photo/Bob Roller)

BEIRUT (CNS) — At the Monastery of St. Francis of Assisi in Bayada, north of Beirut, faithful gathered for Ash Monday Mass in the chapel Feb. 12.

In the Maronite Catholic Church, ashes are distributed on Monday, two days ahead of the Latin rite’s traditional Ash Wednesday distribution. This allows Catholics to observe 40 days of Lent, but also celebrate two church feasts for which fasting is not required: the feast of St. Joseph and the feast of the Annunciation.

“To change our character, it is difficult, but we ask God for the grace to be able to fast,” Melkite Father Nidal Abourjaily said in his homily before distributing ashes.

“Fasting will help us to grow closer to God as we unite our sufferings with him, and this is the most important thing,” said Father Nidal, a Franciscan Capuchin and superior of the monastery.

Typically, in Lebanon, Catholics follow the recommendations of their respective rites regarding their fast for Lent. The Maronite Church, for example, asks for fasting daily from midnight until 12 noon, and abstinence from meat and dairy products for those in good health. Sundays are not considered days of fast or abstinence.

“All fast, in some way,” Father Nidal told Catholic News Service of the faithful — a blending from Catholic rites, including Maronite and Melkite as well as some Roman Catholic — who attend St. Francis.

Berthe Obeid, a Melkite Catholic, told CNS she fasts until noon and sometimes until 3 p.m.

“I like chocolate and nuts, so I try to stop eating those as well,” said Obeid.

“It’s not so difficult when I know I am doing this for the Lord. I want to do something to please him, to be near him, so he gives me more strength to do it. Lent is a time to draw closer to God, to leave the things that can pull us away from him,” she explained.

“Looking back over the years, I can see now how I’m growing in my faith because of Lent,” Obeid added.

During Lent, Myrna Chaker, a Maronite Catholic, will be fasting each day until noon and will abstain from dairy and meat.

“I also try as much as possible to give up the things I really like,” Chaker said, noting that she likes crispy foods such as crackers and toasted bread. “And definitely sweets. I love chocolate.”

“When I give up material things, it helps me more in the spiritual life. I should forget myself during Lent and focus on how to help people and how to show more and more love. I want to offer up this Lent more for the people around me,” Chaker explained.

Aside from fasting, Chaker said she tries to devote more time to prayer and to attend Mass every day as well as eucharistic adoration.

“I ask God to use me as an instrument,” she noted, adding that social media offers an opportunity to share Scriptures, prayers and inspirational tidbits to encourage others in their Lenten journey.

Joseph Haddad, a Melkite Catholic, is a self-described cheese addict, but said he will not eat meat or dairy products during Lent.

“Lent is the time to work on the will. It’s the least I can do for the Lord,” said Haddad. “I need to step forward to the kingdom of God.”

“Actually, I was waiting for Lent. For Christians who don’t experience Lent, they don’t know what they’re missing,” Haddad said. “You might not see any difference during Lent but, afterward, surely there’s a blessing, even if it’s a few months later. And you see yourself maturing more with God.”

Haddad said he would intensify his fast during Holy Week. For three days, beginning on Holy Thursday until noon on Holy Saturday, Haddad fasts completely, taking only occasional sips of water.

Especially during Holy Week, Father Nidal senses that the faithful “really suffer with Christ and participate in his sufferings.”

“You can sometimes see people crying” in church, he said. “They know that Jesus saved us by giving himself on the cross. Knowing that, they in turn participate strongly.”

While some faithful have different ways of fasting during Lent, Father Nidal noted, “the most important thing is to arrive to a spiritual resurrection with Christ.”