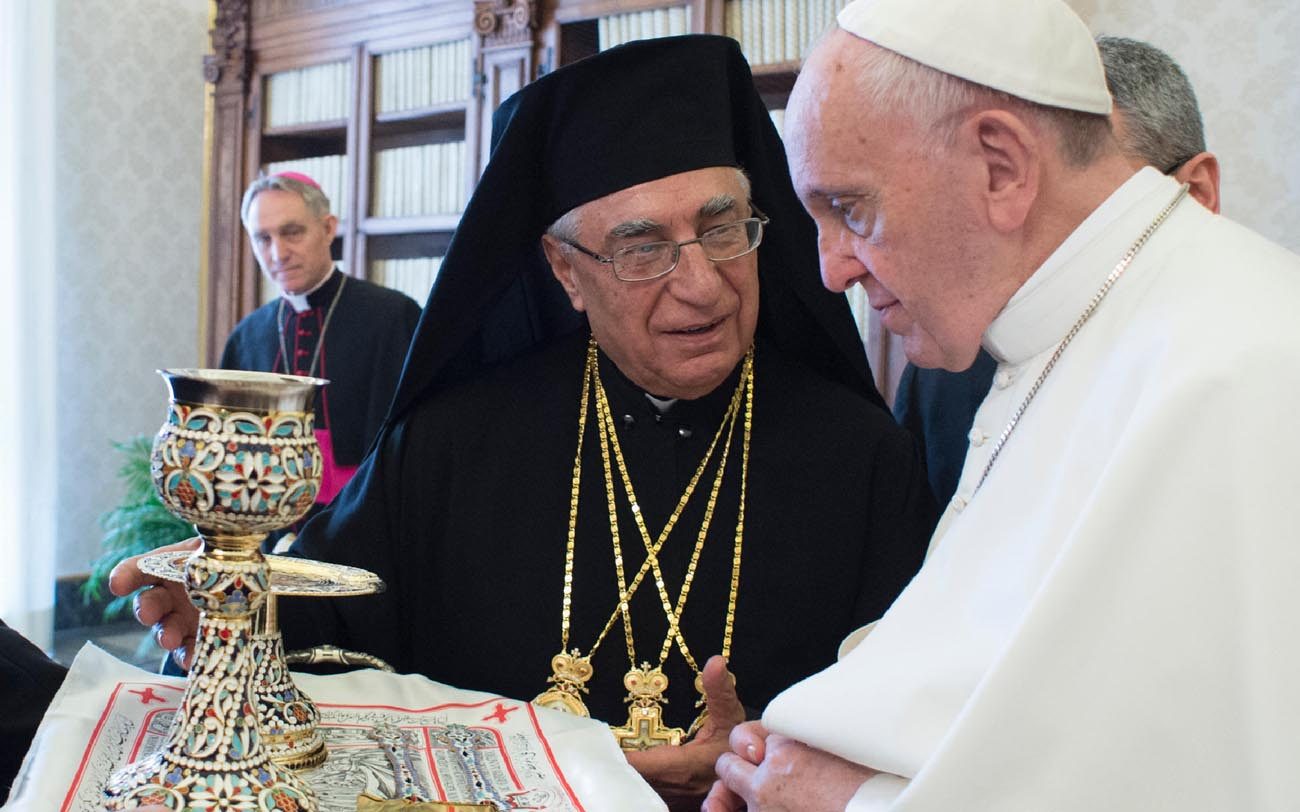 Pope Francis accepts gifts from Melkite Patriarch Joseph Absi during a meeting with the Melkite synod of bishops at the Vatican Feb. 12. The Melkite Church is an Eastern Catholic church in full communion with Rome. (CNS photo/Vatican Media)

VATICAN CITY (CNS) — Formalizing their unity in the intimate setting of the chapel of the papal residence, Pope Francis and Melkite Patriarch Joseph Absi concelebrated Mass together in the presence of members of the Melkite synod of bishops.

Instead of giving a homily at the early morning Mass Feb. 13, Pope Francis explained the special nature of Patriarch Absi’s visit.

“He is the father of a church, a very ancient church, and he comes to embrace Peter, to say, ‘I’m in communion with Peter,'” Pope Francis said during the Mass in the Domus Sanctae Marthae. The Melkite church, one of the many Eastern churches in full union with Rome, “has its own theology within Catholic theology, it has a marvelous liturgy and a people of its own.”

“At this time, a large portion of that people is being crucified like Jesus,” the pope said, referring especially to Melkites who, like Patriarch Absi, are from Syria. “We offer this Mass for the people, for the people who suffer, for the persecuted Christians of the Middle East.”

The 71-year-old patriarch, who was elected in June, told Pope Francis, “I cannot describe how beautiful this moment is,” but he said he was “very moved by your fraternal charity, by the gestures of fraternity and solidarity you have shown our church.”

At the end of the Mass, Pope Francis asked the patriarch to join him in giving the final blessing to the few dozen people invited to the morning Mass.

The pope, patriarch and bishops also had met Feb. 12 in the papal library.

“At this difficult time, many Christian communities in the Middle East are called to live their faith in the Lord Jesus in the midst of many trials,” the pope told them. He prayed that the patriarch, bishops and priests of the Melkite church would live in a way that would encourage all the faithful “to remain in the land where divine providence wanted them to be.”

Pope Francis urged them to be “pastors — like the Lord with his disciples — who reanimate the hearts of the faithful by staying close to them, consoling them, reaching down to them and their needs; pastors who, at the same time, accompany them up, to seek what is above, where there is Christ, and not the things of earth.”

While Pope Francis had called Catholics to join a day of prayer and fasting Feb. 23 specifically for peace in Congo and South Sudan, he told the Melkites, “I will not fail to remember, in a special way, Syria, which has been struck by indescribable suffering these past few years.”