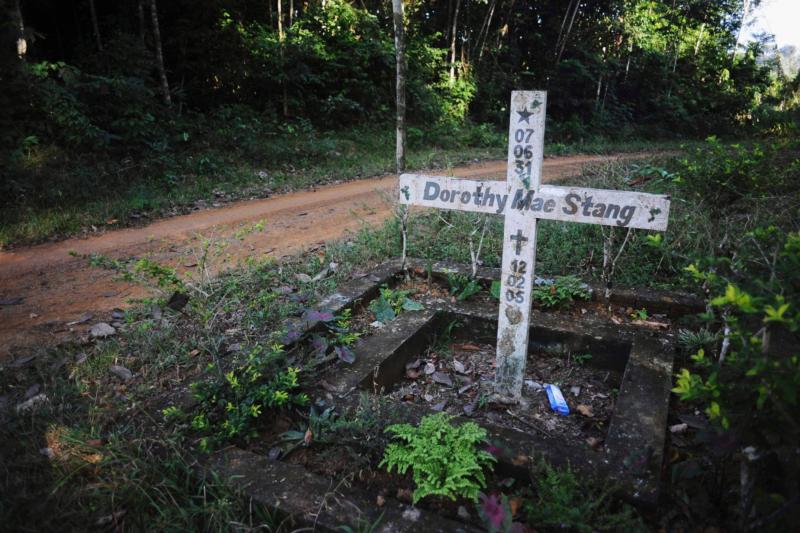 A wooden cross is seen in 2012 on the spot where U.S. Sister Dorothy Stang, a member of the Sisters of Notre Dame de Namur, was murdered Feb. 12, 2005, on an isolated road near the Brazilian town of Anapu. A Brazilian court has denied the request to revise the sentence of Regivaldo Pereira Galvao, one of the men convicted of masterminding the killing of Sister Stang. (CNS photo/Lunae Parracho, Reuters)

SAO PAULO, Brazil (CNS) — A Brazilian court denied Regivaldo Pereira Galvao’s request for a reduction in sentence for his conviction of masterminding the 2005 killing of Sister Dorothy Stang, a U.S missionary.

In 2010, Galvao was convicted and sentenced to 30 years in prison, but he was released in 2012 and allowed to remain free while appealing his sentence. The rancher was re-arrested in 2017.

On Feb. 22, the court accepted the prosecutor’s arguments that the sentence was appropriate, based on the evidence.

This was the second time Galvao asked for a revision of his sentence, which had already been reduced from 30 to 25 years.

Sister Dorothy, as she was known in Brazil, was a member of the Sisters of Notre Dame de Namur. She received international recognition as a crusader for the poor communities living in remote areas of the Amazon and for her collaboration with the Brazilian bishops’ Pastoral Land Commission.

Sister Stang was shot several times in the chest and head in Anapu, Brazil, as she headed to meet government officials to discuss the demarcation of land for peasants.

In addition to Galvao, four other men were arrested and convicted for her assassination; their sentences ranged from 17 to 30 years.