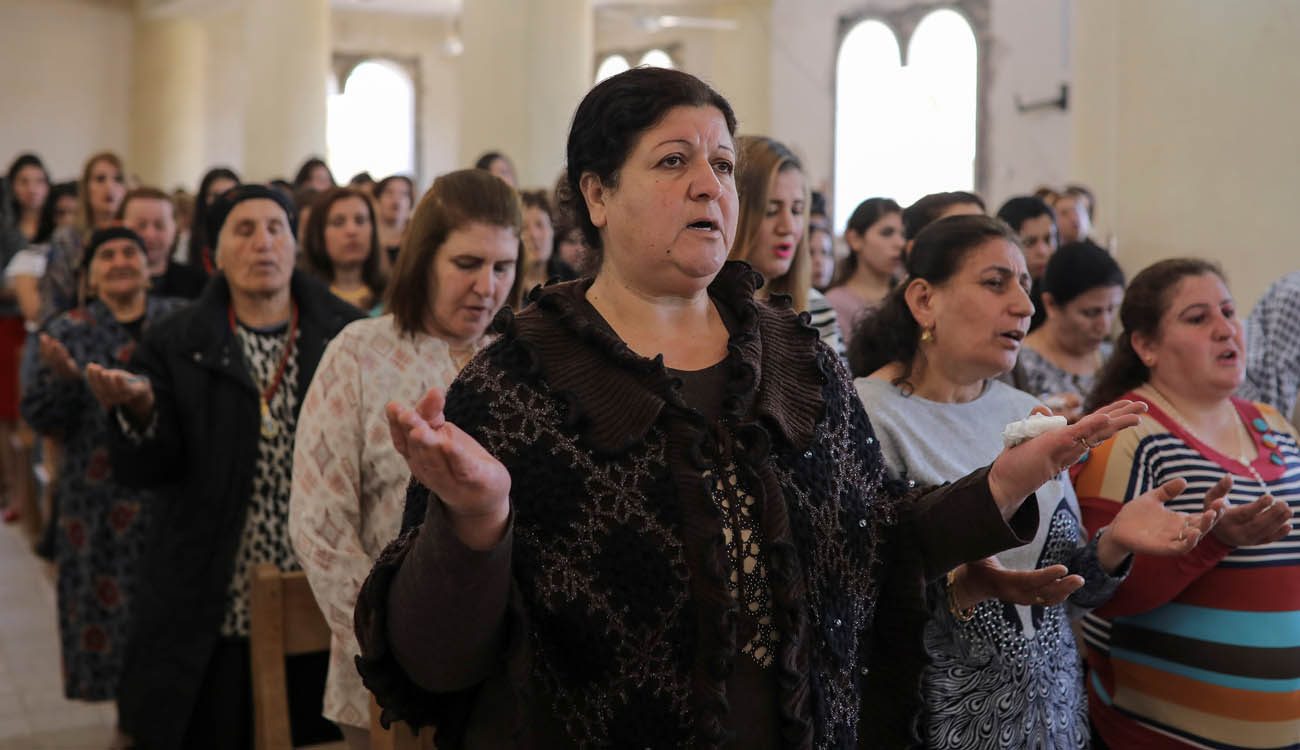 Worshippers pray during Mass in 2017 at St. George Chaldean Catholic church in Tel Esqof, Iraq, which was damaged by Islamic State militants. Iraqi Catholic leaders are urging Christians to remain steadfast in this Lenten season as they encounter challenges of Islamic State's legacy in their historic lands. (CNS photo/Marko Djurica, Reuters)

AMMAN, Jordan (CNS) — Iraqi Catholic leaders are urging Christians to remain steadfast in this Lenten season as they encounter challenges of the so-called Islamic State’s legacy in their historic lands.

In a Lenten pastoral letter, Chaldean Catholic Patriarch Louis Sako of Baghdad urged Iraqi Christians to pursue unity with other Christians at this sacred time with “open hearts.”

“Many Christians today live in a crisis of faith and intellect because of the circumstances of war, instability, migration and the dominance of social media on the details of their daily lives,” he wrote in the letter, released Feb. 21.

Many Chaldean Catholics lost their homes, properties and other possessions as they fled the so-called Islamic State militants in the summer of 2014. Many are destitute, still living in camps for the internally displaced or sheltering abroad.

“However, these challenges should not discourage their determination and dissuade them from renewing their faith and deepening it, to witness of the Lord and his church,” the patriarch said, calling on Christians to “increase within themselves strength, confidence and enthusiasm.”

Patriarch Sako also repeated his appeal to fellow Iraqis from different religious backgrounds to recognize Christians as “part of the national fabric of Iraq and to stop their decline, for Christians have had a historical presence in this country, where they have a role and a message.”

Chaldean Catholic Archbishop Yousif Mirkis of Kirkuk and Sulaimaniyah estimates that between “40-45 percent of the Christians have returned to the some of their ancestral villages, particularly Qaraqosh.”

But he and other Catholic leaders told Catholic News Service there are many challenges to those Christians hoping to return home after the Islamic State occupation and expulsion.

“There are problems with Bartella. Although Bartella is not far from Qaraqosh, the Shiites have been imposing themselves and using the force of Iran to take over territory, etc. The Christians of Bartella are very upset by this situation,” Archbishop Mirkis told CNS by phone.

“Maybe the Americans and Baghdad government are not very aware of what is happening in these villages,” he said.

“The Christians of Bartella tell me: ‘We cannot go back. We don’t dare to go back.’ So, these people are still sheltering in Irbil or in the camps for internally displaced people in Kirkuk and Sulaimaniyah,” Archbishop Mirkis said of the northern Iraqi cities providing Christians with refuge.

“Qaraqosh is a little bit better. There, houses are being repaired. Now, the people are returning, but many houses are burned and are completely destroyed. These Christians cannot afford the prices to reconstruct the houses,” he said.

The archbishop and his dioceses have been helping displaced Christians with material and spiritual support as well as providing transportation for hundreds of their university students. Many Christian supporters claim Christian organizations have been the sole sponsors of reconstruction efforts, without help from the government.

But Father Emanuel Youkhana told CNS that so far, the planned “return, reconstruction and rebuilding movement did not meet our expectations and hopes. Thousands of families are hesitating and/or unable to return, and they are still displaced in Kurdistan.”

The archimandrite, a member of the Assyrian Church of the East, heads the Christian Aid Program Northern Iraq, CAPNI. He spoke to CNS by phone and email.

Father Youkhana said there are many reasons for the setback. He cited the “huge destruction of houses and the lack of public services, such as schools, health centers, water and electricity networks” among the debilitating factors.

He also said the “uncertain and unstable political situation and the outcome of the ongoing political conflict between Baghdad (the Iraqi government) and Irbil (the Kurdish Regional Government) on the disputed areas, as (the) Ninevah Plain, make people hesitate to return” and instead remain where they have fled.

He, too, spoke of a “clear, daily plan” underway on the part of the Shiite-majority Iraqi authorities to impose a “Shiite demographic expansion, with the aim of changing the Christian identity of historic Christian towns.”

This was “in addition to increasing Shiite political influence, while creating an Islamic Shiite environment,” the archimandrite warned. “Shiite slogans are everywhere as well as Shiite political slogans.”

Father Youkhana said the Iraqi government has once again betrayed the victims of the Islamic State, such as Christians and Yezidis, by not putting forth a “clear will and plan” or stating “which process of transitional justice will be implemented.”

He said a nationwide debate also has not yet taken place on why the 2014 catastrophe happened, nor on the ways to prevent it from happening again. Revisions to laws, curriculum, media, etc. are needed to build peaceful coexistence, with additional areas to be addressed by religious leaders and civil society, he added.

Such failings, “along with the lack of material support from the government are deepening the gap between the people and state,” Father Youkhana warned. He said the longer this inertia goes on, “the more Iraqi minorities can be expected to migrant, unfortunately.”