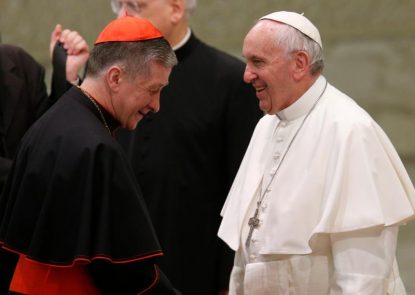 Cardinal Blase J. Cupich of Chicago walks away after meeting Pope Francis during his general audience in Paul VI hall at the Vatican in this Feb. 7, 2018, file photo. (CNS photo/Paul Haring)

The pope is not offering the new approach in a vacuum, but is basing it on church teaching, including documents of the Second Vatican Council, Cardinal Cupich said in a lecture at Cambridge University Feb. 9.

Pope Francis’ apostolic exhortation on the family, “Amoris Laetitia,” makes the case that couples and families face challenges today that are different from the past, Cardinal Cupich said in the Von Hugel Lecture, a speech sponsored annually at the Von Hugel Institute for Critical Catholic Inquiry. The institute is part of St. Edmund’s College at the University of Cambridge.

“‘Amoris’ is nothing short of the Holy Father’s call to action, in which he summons church leaders, both lay and clergy, to enter into a serious dialogue about how best to minister to couples and families in a way that is faithful, honest and creative,” the cardinal said.

Some of Pope Francis’ teachings in “Amoris Laetitia” have come under criticism by Catholics who think he is abandoning traditional church teaching on marriage.

But Cardinal Cupich said that, in calling for a change in approach, Pope Francis relied on consultations with the faithful and deliberations of the 2014 and 2015 Synods of Bishops on the family.

Failure to understand that holistic approach “has led some critics to misinterpret and misunderstand ‘Amoris,'” the cardinal said, by limiting their scope “to an idealistic understanding of marriage and family.”

He said an examination of the exhortation called for a shift in thinking in six areas.

“Our ministerial approach should begin with the understanding that families are not problems to solve,” the cardinal said. “Rather, they are opportunities for the church to discern, with the aid of the Spirit, how God is active in our time and what God is calling us to do, here and now.”

He said Pope Francis reminds people that “the family is such a privileged place for God’s self-revelation that nothing can stand in the way of God’s grace.”

“If we accept that families are the privileged place of God’s self-revelation and activity, then no family should be considered deprived of God’s grace,” Cardinal Cupich said. This means God is not just found in families that meet the church’s idea of an ideal marriage, but in marriages of other religious traditions and in couples who have remarried.

The church’s ministers must shift how they interact with families and married couples, maintaining a balance between teaching and listening, the cardinal said.

Such a balance would ensure that “the core goal of formal teaching on marriage is accompaniment, not the pursuit of an abstract, isolated set of truths,” he said, and that would represent a shift that is “nothing short of revolutionary.”

“The most important consequence of this call to accompaniment ought to be greater attention to the voices of the laity, especially on matters of marriage and family life, for they live this reality day to day,” Cardinal Cupich said.

The cardinal cited the definition of conscience in the Vatican II document “Gaudium et Spes” to illustrate the shift needed to “a profound respect for the discernment of married couples and families. Their decisions of conscience represent God’s personal guidance for the particularities of their lives.”

Another shift is to incorporate insights of the faithful in the church’s understanding of marriage, Cardinal Cupich said. “There can be no better teacher for the church than the faithful who actively walk this path of personal development,” he said.

Pope Francis is calling for a shift from a straight doctrinal approach to marriage to an approach that combines doctrinal and pastoral attitudes, Cardinal Cupich said.

“The result is not relativism or an arbitrary application of the doctrinal law, but an authentic receptivity” to God revealing himself “in the concrete realities of family life and to the work of the Holy Spirit in the consciences of the faithful.” Consciences are not focused primarily on universal rules, he said, but are “immersed in the concrete situations which give vital context to our moral choices.”

One of the best ways to do this to the create a culture of care and hospitality in parishes communities, especially for those in second marriages, Cardinal Cupich said.

While people who are divorced and civilly remarried generally are not allowed to receive the sacraments, they are still considered Catholics and are encouraged to attend Mass.

The final shift in thinking Cardinal Cupich identified involves putting mercy back at the heart of the Gospel.

“Doctrinal development is about remaining open to the invitation to see our moral teachings on marriage and the family through the lens of God’s omnipotent mercy,” the cardinal said.

In calling for these changes, Pope Francis is “retrieving a way of thinking about church teaching and practice that has its root in our tradition,” Cardinal Cupich said.

NEXT: India’s Cardinal Gracias concerned over threats to diversity