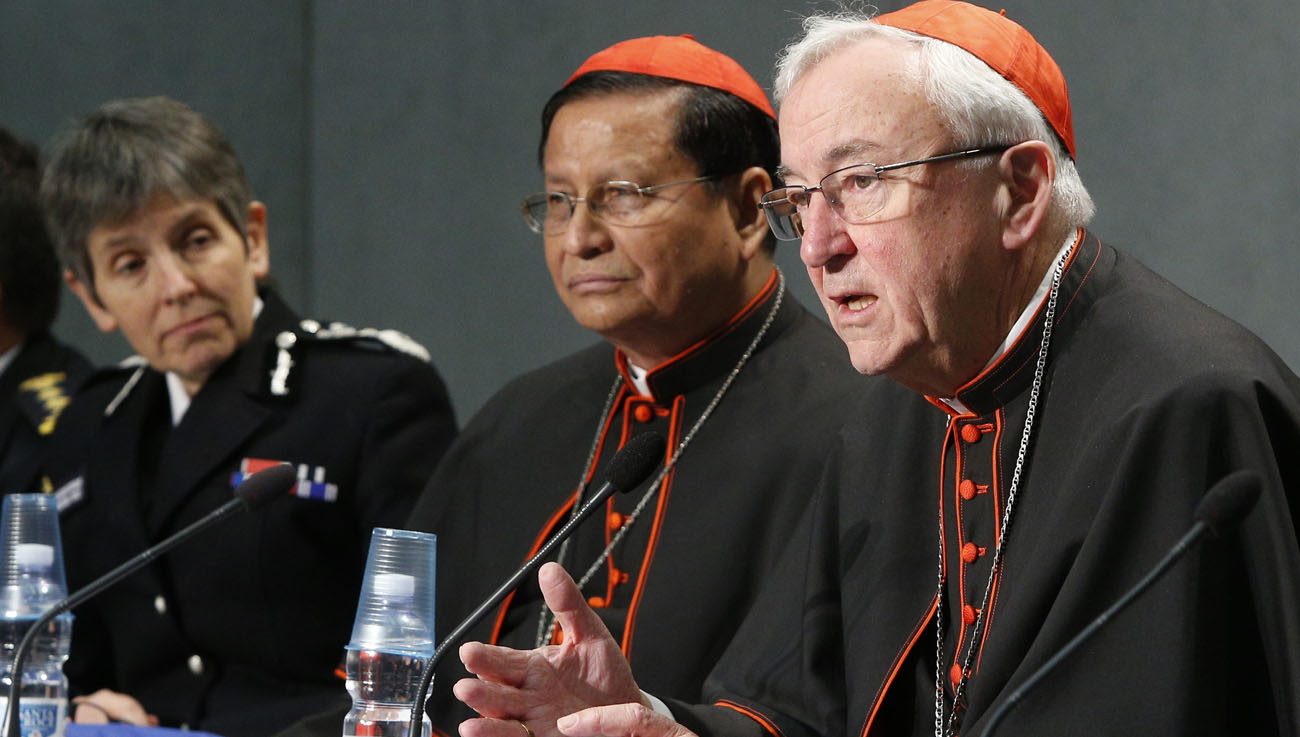 Modern forms of slavery “are far more widespread than previously imagined, even — to our scandal and shame — within the most prosperous of our societies,” the pope said Feb. 9 during a meeting with an international group of law enforcement and church workers.

“God’s cry to Cain, found in the first pages of the Bible — ‘Where is your brother?’ — challenges us to examine seriously the various forms of complicity by which society tolerates, and encourages, particularly with regard to the sex trade, the exploitation of vulnerable men, women and children,” the pope told the Santa Marta Group.

The Santa Marta Group is an anti-trafficking initiative organized by the Catholic Bishops’ Conference of England and Wales to bring together representatives of bishops’ conferences and top national and international law enforcement officials to promote cooperation, particularly in identifying victims of trafficking and caring for them once they are rescued.

British Cardinal Vincent Nichols of Westminster, introducing the group to the pope, described human trafficking as “the darkest face of globalization.”

The cardinal told reporters later there are more than 42 million people in slavery today.

Cressida Dick, commissioner of the London Metropolitan Police, told Catholic News Service she “absolutely” agrees with Pope Francis that citizens are encouraging, or at least tolerating, human trafficking by tolerating prostitution. She said her department has “well over 20 current, live operations targeting human trafficking. A large number of those relate to the sex trade.”

The victims are mostly women and girls, “and the people paying them for their services are often oblivious to the history of how somebody ended up in that position,” the commissioner said.

During the meeting at the Vatican Feb. 8-9, representatives of more than 30 countries shared what their governments and their Catholic communities are doing to prevent trafficking, rescue and assist victims and prosecute traffickers.

William Canny, executive director of the U.S. bishops’ Migration and Refugee Services, told the Santa Marta Group that the church in the United States has been working to counter trafficking for some 20 years, with activities ranging from grass-roots advocacy to specialized assistance to victims of “this heinous crime.”

Many diocesan Catholic Charities offices work directly with the Department of Homeland Security’s investigative unit to ensure immediate assistance to those rescued from traffickers, he said. The Catholic Health Association has developed tools to help health care workers recognize possible victims of trafficking when they come to an emergency room, hospital or rural health clinic.

While Catholic agencies provide emergency assistance, shelter and support to rescued victims of trafficking, Canny said, the bishops’ conference is now looking at how to promote “long-term restoration for survivors.”

“The program will prepare victims of trafficking, whether U.S. citizens or foreign nationals, to enter employment through individual coaching, skill attainment” and education in preparing resumes and getting ready for job interviews, Canny said. “Victims of forced labor and commercial sexual exploitation deserve the chance to move beyond basic survival by achieving dignified employment and self-sufficiency.”

Callista Gingrich, the U.S. ambassador to the Holy See, told the group the U.S. State Department, the Department of Homeland Security and the FBI have been devoting increasing resources to fighting human trafficking and have increased their partnerships with Catholic and other nongovernmental organizations.

“The traumatic experiences suffered by victims of human trafficking are beyond comprehension,” she said. “It is crucial that law enforcement agencies develop strong and enduring partnerships with NGOs and faith-based organizations that are on the front lines of survivor support.”

For Pope Francis and the Vatican, an important part of preventing trafficking is to open up more pathways to legal migration so that the very poor or people fearing persecution do not turn to traffickers in the first place.

Dick, the London police commissioner, said she would not comment on the politics of immigration policy, but insisted that when rescuing victims or taking their statements, the police must recognize that the person is a victim first of all. “If there are other matters revealed, for example immigration or crime, then that must be dealt with through the appropriate authorities, but we want to be supportive of the individual in the first instance.”