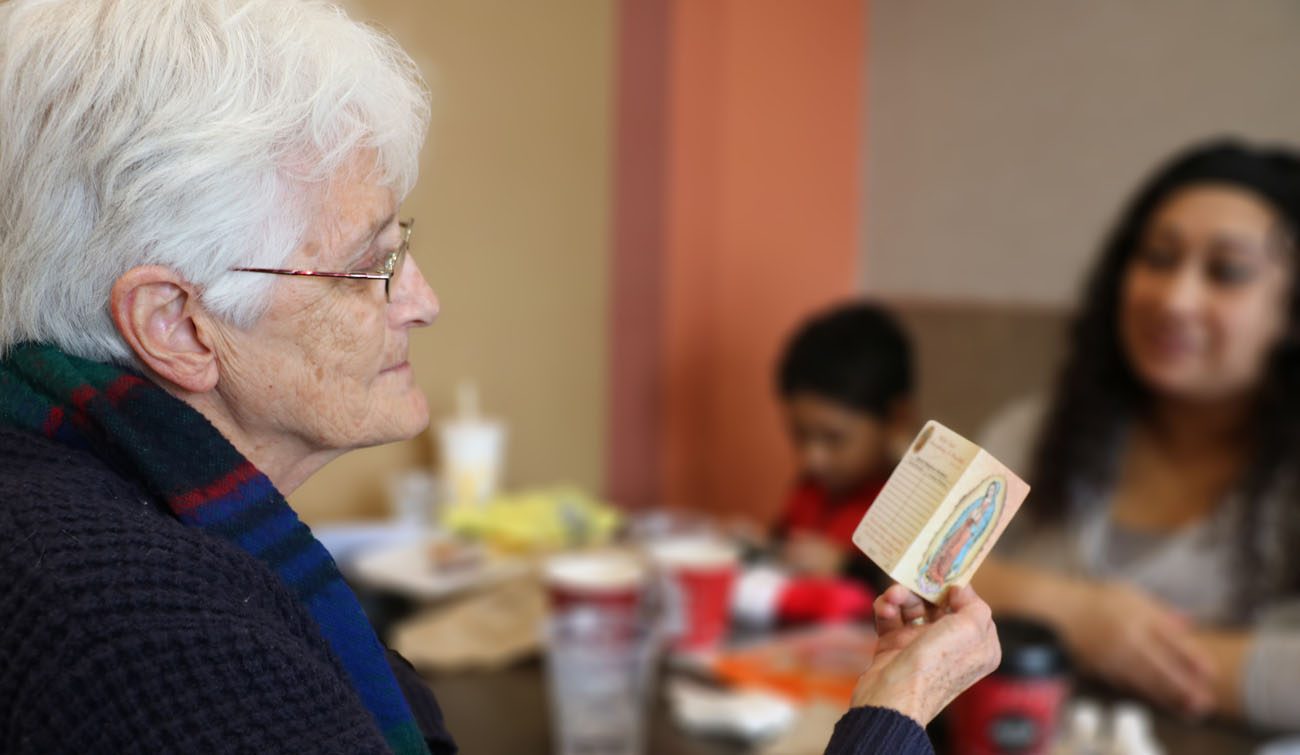 Mercy Sister Kathleen Erickson shares a prayer card with Belinda and her son, Adan, in 2017 at a McDonald's restaurant in an undisclosed location. Belinda fled to the United States after enduring 12 years as a victim of criminal activity perpetrated by gang members in El Salvador. (CNS photo/Joe Ruff, Catholic Voice)

OMAHA, Neb. (CNS) — Belinda, a native of El Salvador, lights up a room with her smile — until she recounts her fear of violent gangs in San Salvador, fleeing to escape them and spending months in jail in the United States.

Then her sparkling eyes cloud over, her face falls and tears flow freely.

“I have nightmares. I get headaches. I’m thankful I’m alive, but I wonder how I got through it,” she said.

Speaking through an interpreter, Belinda, 36, now living in a city north of Omaha in the archdiocese, recently described 12 years of extortion, forced criminal behavior including prostitution, and escalating violence from one of her brothers and his fellow gang members.

Her life of terror began in 2003 and lasted until she fled the country in 2015, after gang members beat her and her then-15-year-old son who was trying to protect her, nearly killing him, Belinda said through interpreter Mercy Sister Kathleen Erickson of Omaha.

“They used a machete and nearly cut off his legs,” Belinda told the Catholic Voice, newspaper of the Archdiocese of Omaha. “That’s when I felt the most fear.”

Belinda, who asked that her real name be withheld to protect another family member who lacks legal status in the United States, fled with her then-4-year-old son, Adan (also a pseudonym), on a bus to Guatemala, then into Mexico, where she called her parents in San Salvador and learned gang members had been to their house demanding to see her.

“They were going to kill me,” she said.

Belinda is not alone in her fear of gangs in El Salvador. Many others flee El Salvador, as well as Mexico and other Central and South American countries, to escape criminal gangs that bribe police, threaten politicians and contribute to a breakdown in society. Others flee political persecution or poor economic conditions.

She and Adan made it across the Mexico-U.S. border, and, seeking help from officials in Port Isabel, Texas, they were detained. She was told she had a criminal record, and to go back to Mexico if she wanted to remain with her son.

“I can’t go back there,” she told authorities. “OK,” they replied, and took him away, not telling her where Adan was going.

“I was screaming and crying,” Belinda said. “My son and I had never been separated before. Every day, over and over, I asked, ‘Where is my son, where is my son? And they would not tell me.”

“And then they said, ‘You had no son with you. You came by yourself.'”

Detained for about a month in Port Isabel, Belinda managed to call her relative in Nebraska, who contacted attorney Alberto Silva and his Latino Law Center in Omaha.

Silva began legal petitions to help Belinda, and immigration authorities flew her to Pennsylvania, where she appeared before a judge, who did not believe her story about Adan.

“We do not take children from their parents,” the judge told her.

Belinda was detained in Pennsylvania for three months. But Silva was working on the case, helping to find and assist Adan and trying to get Belinda a change of venue to Omaha.

Then, not knowing why or what might happen next, Belinda was flown to Louisiana, where she was detained for three days in what she remembers as a “very cold place” with no blankets or other bed coverings.

“Each place you go, it’s a new drama,” Sister Kathleen said, reflecting on Belinda’s odyssey through U.S. immigration channels. “You don’t know who you’ll meet or what you’ll need. The immigration system is unpredictable, arbitrary and cruel.”

Finally, someone was nice to Belinda, Sister Kathleen said. A woman helping transport detainees decided Belinda was not a flight threat — and unlike actions taken by other authorities during her plane trips to Pennsylvania and Louisiana, did not place her in handcuffs or leg chains as she was flown to Omaha in February 2016, to be detained for the next eighth months in the Douglas County Jail.

“It was the first person who had been really nice,” Sister Kathleen said, as Belinda nodded at the table in a McDonald’s restaurant. “It made a big impression on her because this person was so nice.”

Meanwhile, Adan, now 7, was in the immigration system for about six months, including at least one children’s shelter. He was treated well, overall, he said.

With Silva’s help, a social worker had gotten involved in Adan’s case, and they arranged for the boy’s arrival in Omaha. He lived with her relative while she worked to gain asylum, arguing that a return to El Salvador would be dangerous for her and her son.

Jail also is where Belinda met Sister Kathleen, 76, who in retirement has continued her more than two decades of ministry to immigrants and helping people understand immigration issues.

An immigration judge heard Belinda’s story, and believed her. She recounted the dangers she faced, her flight to safety and her trip through the immigration system. About three months later, he granted her asylum.

But immigration officials appealed, arguing she was a criminal. Part of her case in seeking asylum included sharing that at one point in San Salvador, the gang forced her to bring marijuana to a gang member in jail. She was caught, and spent time behind bars.

Silva was determined to fight the appeal. Finally, immigration officials dropped it and in October 2016, Belinda was granted asylum. She could leave jail after a year in detention and live legally in the United States.

Silva, a former Methodist pastor, is dedicated as an attorney to helping Latino families with immigration, criminal, family and business matters. He said not many people realize the hardships people like Belinda and her son face in their home countries and in trying to get to the United States.

She endured lack of money, danger and hunger on the road to the United States, he said. “There’s a lot of suffering along the way she had to endure, just to get to the border,” Silva said.

Now, Belinda is applying for her green card and makes a living by cleaning offices at night. She takes Adan, a second-grader, to school in the morning and picks him up again in the afternoon. She encounters some racism in Nebraska, but decided it is nothing next to what she endured to find safety.

An evangelical Christian, Belinda said she believes God got her through her trials. And thinking about her son, Adan, and her older son, now 19 and still living in El Salvador, kept alive her desire to live. Smiling, she shared a photo of her older son, taken recently and shared via the internet.

She tells her story in part to help increase awareness of the difficulties people can face as they live in dangerous countries and flee to safety, or simply to find a better life.

And it might help others who have gone through what she went through, to know they are not alone, she said.

NEXT: Guam archbishop under investigation greets pope at general audience