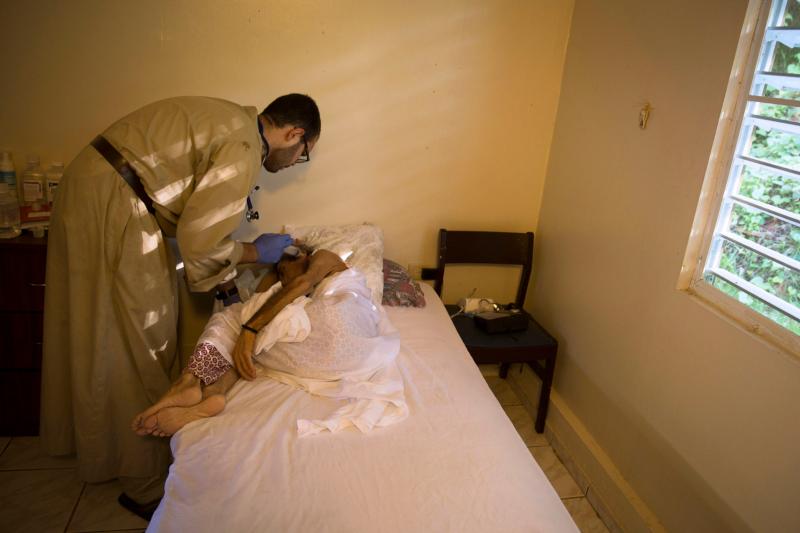 ROME (CNS) — Intentionally causing a patient’s death is different from accepting that a patient is dying, then providing emotional and spiritual support and pain relief, said a doctor who practices and promotes palliative care.

Dr. Eduardo Bruera, medical director of the Department of Supportive Care Center at the University of Texas MD Anderson Cancer Center in Houston, was one of the speakers at a Feb. 28-March 1 international congress on palliative care sponsored by the Pontifical Academy for Life.

“The reality is that, in medicine, we have focused much more on disease than on patients,” Bruera said. For example, he said, patients who report a “high-symptom burden” may be suffering from their cancer or from the toxicity of their treatment, but their situation also may be approaching the unbearable because they lost their job or are worrying about the impact of their illness on their families.

Palliative care, Bruera said, asks the medical team, the patient and the family to work together to alleviate suffering, whether it is physical, emotional or spiritual.

In a message to the conference at Rome’s Augustinian Patristic Institute, Cardinal Pietro Parolin, Vatican secretary of state, said palliative care involves “a rediscover of the most profound vocation of medicine, which consists first of all in taking care of the patient. The doctor’s task always is to care, even when it is not possible to heal.”

Obviously, he said, medicine and medical research have an enduring commitment to discovering new cures and defeating illness, but palliative care shows an awareness that, when everything medical has been attempted, limits must be “recognized and accepted.”

“When all the resources of ‘doing’ seem to be exhausted,” he said, “then comes the most important aspect of human relations, that of ‘being’: being present, being near, being accepting.”

For Christians, he said, that means “sharing the impotence of those reaching the end of life,” and making sure that the final phase of a person’s life on earth “is no longer a place of separation and solitude, but an occasion of encounter and communion.”

“Pain therapy” is a particularly sensitive area of palliative care, he said, noting that “already Pope Pius XII, distinguishing it from euthanasia, clearly gave legitimacy to the administration of analgesics to alleviate unbearable pain that could not be treated in any other way even when, in the phase of imminent death, it could cause a shortening of life.”

“Attentive discernment and much prudence” also is needed when determining the appropriate use of pharmacological sedation, “especially when prolonged and profound,” because it “annuls the relational and communicative dimension” of palliative care, especially its emphasis on family and community.

Prolonged sedation at the end of life, he said, “is, therefore, always partially unsatisfactory and so should be considered an extreme measure to be taken only after having examined and clarified its implications attentively.”

Archbishop Vincenzo Paglia, president of the Academy for Life, said palliative care’s focus on communication among caregivers, patients and family members is essential for overcoming the confusion and debate about “therapeutic obstinacy,” which is using “an excess of treatments that lead to useless suffering.”

“In other words,” he said, “doing everything possible — when understood in the sense of always using every means available — can mean doing too much.”

Archbishop Paglia told the conference that experience has shown that people who support or request euthanasia or physician-assisted suicide focus on “two fears: that of being abandoned and that of pain.”

Palliative care, he said, is an attempt to respond to and allay such fears and, as such, “is a fundamental part of our pro-life work.”

Bishop Kevin W. Vann of Orange, California, attended the meeting on behalf of the California Catholic Conference, which is working closely with the Alliance of Catholic Health Care to educate people about palliative care and offer it in every Catholic hospital in California, which made physician-assisted suicide legal in 2016.

The Catholic program is called “Whole Person Care” and has the mission of showing every person they are “loved, wanted and worthy and will be prepared for and supported in health and serious illness through the end of life,” according to the project outline.

Bishop Vann told Catholic News Service the project offers “an alternative to physician-assisted suicide” by “improving all of our pastoral care and outreach.”

“Being present to folks” who experiencing the fragility of the end of life, “being on the journey with them to explain to them and teach them” the sacred value of life at every stage and, particularly, showing them that they are not alone are essential for combating euthanasia, the bishop said.

When the California legislation passed, he said, fear of dying alone and in pain and a desire to exercise autonomy at the last moments of life seemed to be the primary motivations for supporting the measure.

The reason the church and Catholic hospitals launched their project, he said, “is to show folks they are not alone; we are there with them.”