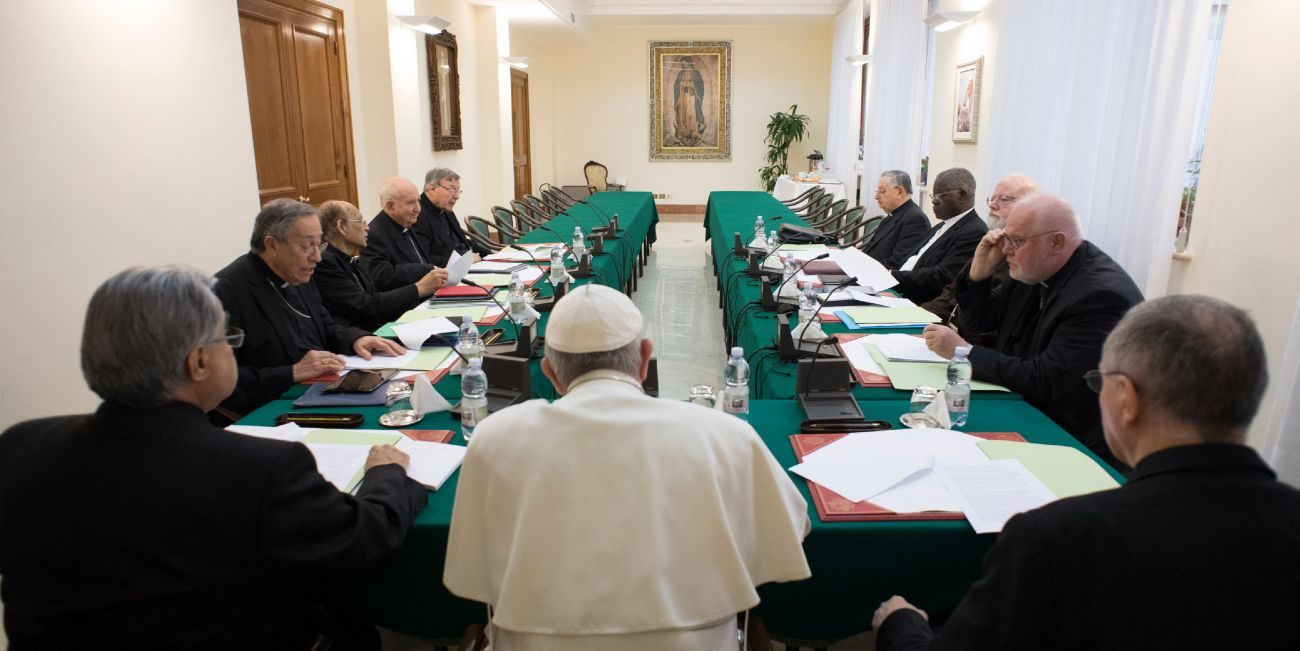 VATICAN CITY (CNS) — Pope Francis and his international Council of Cardinals discussed the possibility of establishing regional tribunals around the world that would judge cases of sexual abuse allegedly committed by clergy, the Vatican spokesman said.

Greg Burke, the spokesman, confirmed a report published Feb. 27 on the website Vatican Insider that said the pope and his cardinal advisers were considering decentralizing the role of the Congregation for the Doctrine of the Faith in handling cases, but would not diminish the congregation’s authority.

“I can say that this is one of the options. The pope himself spoke about this in one of his press conferences,” Burke told journalists Feb. 28.

The Council of Cardinals, often referred to as the C9, held its first meeting of the year Feb. 26-28 with Pope Francis. The pope appointed the council members five years ago to advise him on the reform of the Roman Curia and on church governance.

During his flight to Rome from Fatima last May, Pope Francis spoke to reporters about the possibility of establishing regional tribunals. The Congregation for the Doctrine of the Faith, the pope told journalists, was overwhelmed with “many delayed cases because they have been piling up.” He added that discussions on the regional tribunals were “in the planning stage.”

“For this, we are thinking of providing continent-wide assistance, one or two per continent. For example — in Latin America — one in Colombia, another in Brazil. They would be continental pre-tribunals or tribunals,” he said.

According to Vatican Insider, the establishment of regional tribunals also would resolve the complication of dealing with cases in various countries with different laws and customs, thus allowing for a faster process in examining those cases.

Burke emphasized that if established, regional tribunals “would always be under” the authority of the doctrinal congregation.

The Vatican spokesman said the council also discussed the role of bishops’ conferences and ways the conferences could contribute to discussions on theological issues in a more collegial spirit.

Pope Francis, in his 2013 exhortation, “The Joy of the Gospel,” had written about the need for a greater role for bishops’ conferences, asserting that “excessive centralization, rather than proving helpful, complicates the church’s life and her missionary outreach.”

Among other documents, Burke said, the Council of Cardinals looked at St. John Paul II’s 1998 apostolic letter on the theological and juridical nature of bishops’ conferences.

“It is a question of re-reading the motu proprio, ‘Apostolos Suos,’ in a spirit of healthy decentralization that the pope often speaks of (while) reaffirming that it is always he who guards unity in the church,” Burke said.

Cardinal Pell, who is on a leave of absence while facing charges of sexual abuse filed against him in Australia, was not in attendance. Cardinal Monsengwo was unable to attend the first day of the meeting because of a flight cancellation due to a rare snowstorm that struck Rome Feb. 26, Burke said.