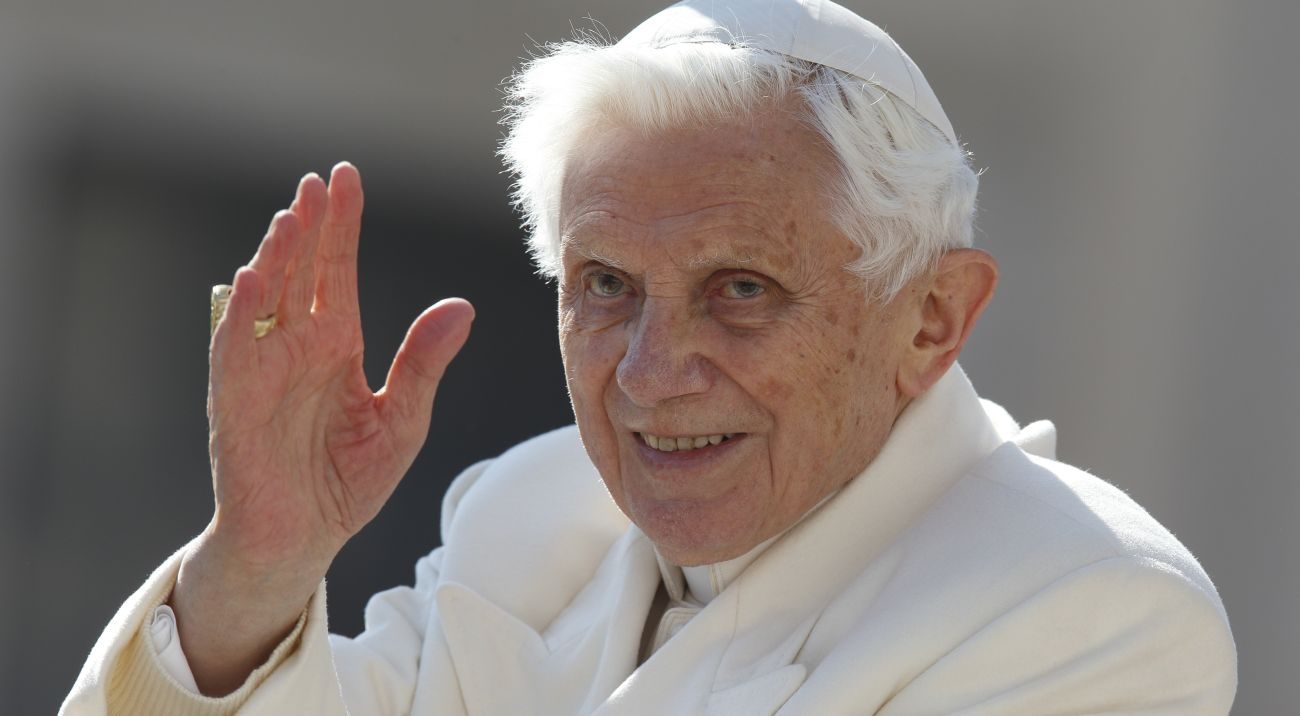 Pope Benedict XVI waves as he leaves his final general audience in St. Peter's Square at the Vatican in this Feb. 27, 2013, file photo. In a Feb. 5, 2018, letter to a journalist from an Italian newspaper, the retired pope said he has diminished physical strength and inwardly is on a "pilgrimage to Home." (CNS photo/Paul Haring)

VATICAN CITY (CNS) — “I am on a pilgrimage toward Home,” retired Pope Benedict XVI wrote, capitalizing the Italian word “casa” or “home.”

Almost exactly five years after announcing his intention to be the first pope in nearly 600 years to resign, Pope Benedict wrote the letter to a journalist from the Italian newspaper Corriere della Sera.

“I am touched to know how many of the readers of your newspaper want to know how I am experiencing this last period of my life,” the 90-year-old retired pope wrote. “In that regard, I can only say that, with the slow diminishing of my physical strength, inwardly I am on a pilgrimage toward Home.”

“It is a great grace in this last, sometimes tiring stage of my journey, to be surrounded by a love and kindness that I never could have imagined,” said the letter, written on stationery with the heading “Benedictus XVI, Papa emeritus.”

Massimo Franco, the journalist, said the letter, dated Feb. 5, was hand-delivered; the newspaper posted it online Feb. 6 and published it on the front page of the print edition Feb. 7.

During a meeting with cardinals Feb. 11, 2013, Pope Benedict stunned the cardinals and the world by saying, in Latin, “After having repeatedly examined my conscience before God, I have come to the certainty that my strengths, due to an advanced age, are no longer suited to an adequate exercise of the Petrine ministry.”

He set the date for his retirement as Feb. 28, 2013. And, seen off by dozens of weeping Vatican employees, he flew by helicopter to the papal villa at Castel Gandolfo, where he remained until after Pope Francis was elected.

The day before he left was a Wednesday and the overflowing crowd in St. Peter’s Square made it clear that it was anything but a normal Wednesday general audience.

He told an estimated 150,000 people that his pontificate, which had lasted almost eight years, was a time of “joy and light, but also difficult moments.”

“The Lord has given us so many days of sun and light breeze, days in which the catch of fish has been abundant,” he said, likening himself to St. Peter on the Sea of Galilee.

“There have also been moments in which the waters were turbulent and the wind contrary, as throughout the history of the church, and the Lord seemed to be asleep,” he said. “But I have always known that the Lord is in that boat and that the boat of the church is not mine, it is not ours, but it is his and he does not let it sink.”

A monastery in the Vatican Gardens was remodeled for Pope Benedict, and that is where he has lived for five years, reading, praying, listening to music and welcoming visitors.

Until 2016, the retired pope occasionally would join Pope Francis at important public liturgies, including the Mass for the canonization of Pope John XXIII and Pope John Paul II in 2014 and for the opening of the 2015-2016 Year of Mercy.

Pope Benedict also attended the ceremonies for the creation of new cardinals in 2014 and 2015. But as it became more and more difficult for Pope Benedict to walk, Pope Francis and the new cardinals would get in vans and drive the short distance to the Mater Ecclesiae monastery to pay their respects.

The retired pope’s letter to Corriere della Sera echoed remarks he had made the afternoon of his retirement when he arrived in Castel Gandolfo and greeted crowds there before the very dramatic, globally televised scene of Swiss Guards closing the massive doors to the villa and hanging up their halberds.

“I am a simple pilgrim who begins the last stage of his pilgrimage on this earth,” he told the people. “But with all my heart, with all my love, with my prayers, with my reflection, with all my interior strength, I still want to work for the common good and the good of the church and humanity.”

In “Last Testament,” a book-length interview with journalist Peter Seewald published in 2016, Pope Benedict insisted he was not pressured by anyone or any particular event to resign, and he did not feel he was running away from any problem. However, he acknowledged “practical governance was not my forte, and this certainly was a weakness.”

Insisting “my hour had passed and I had given all I could,” Pope Benedict said he never regretted resigning, but he did regret hurting friends and faithful who were “really distressed and felt forsaken” by his stepping down.

NEXT: Homilies must help people reflect, not nap, pope says