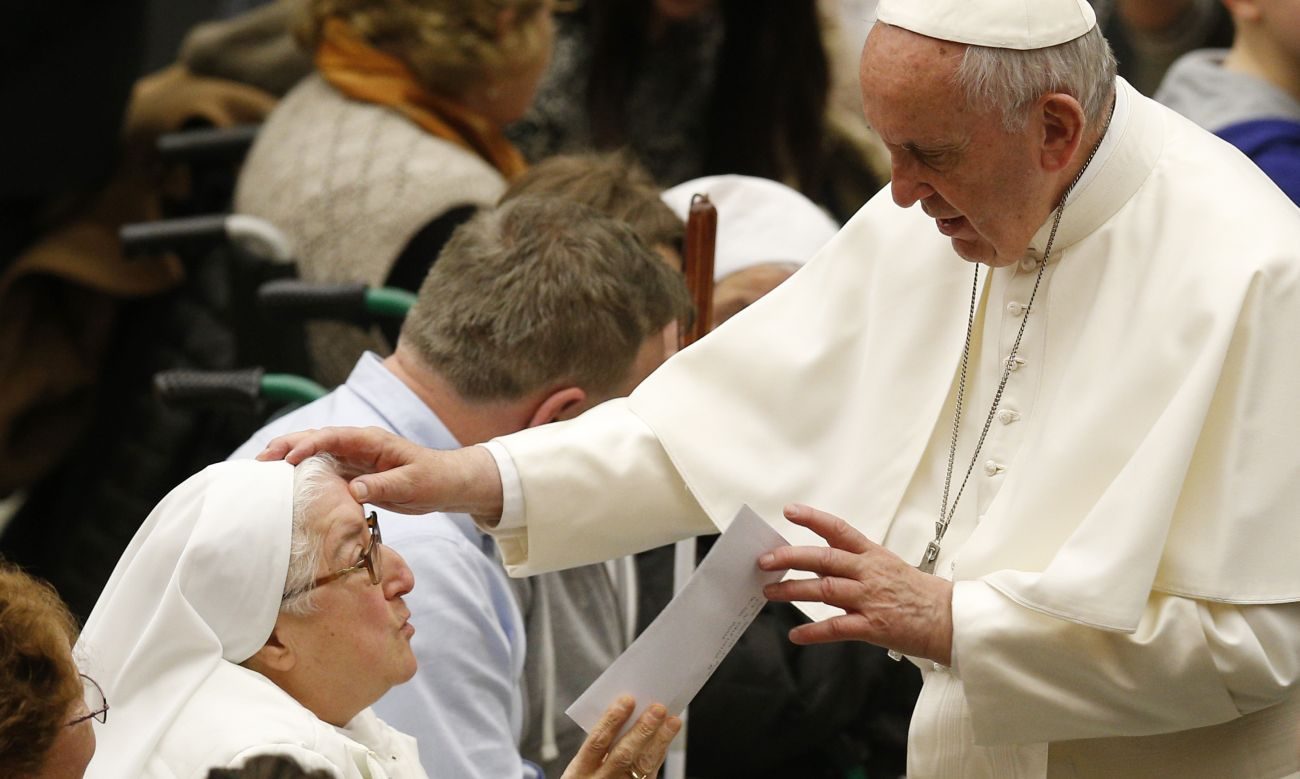 Pope Francis accepts a letter from a nun during his general audience in Paul VI hall at the Vatican Feb. 7. (CNS photo/Paul Haring)

But the faithful in the pews need to do their part, too, the pope said at his weekly general audience Feb. 7.

Catholics need to read the Bible more regularly so they can better understand the Mass readings, and they need to be patient with the homilist, especially if the sermon is boring, meandering or hard to understand, he said.

“How many times do we see some people asleep, chatting or going out to smoke a cigarette during the homily,” the pope asked those gathered for the audience in the Paul VI audience hall.

A homily must be prepared well with prayer and study, and be delivered clearly and briefly — “it must not go longer than 10 minutes, please,” the pope said.

Continuing his series of audience talks on the Mass, Pope Francis spoke about the proclamation of the Gospel and the homily.

Whoever gives the homily must recognize that it is not about himself, but that he is “giving voice to Jesus, he is preaching the word of Jesus,” the pope said.

The homily is not a lecture, a lesson, a catechesis or just small talk, he said; it is the minister continuing a dialogue the Lord has already established with his people so that his word may become part of their lives.

“The word of the Lord ends its journey becoming flesh in us, translating itself into action, as happened in (the lives of) Mary and the saints,” he said

Just as the preacher must try to offer “a real service” to all those gathered for Mass, the pope said, the people in the pews must do their part, above all by paying attention and listening with a proper attitude — free from “subjective pretenses” and prejudices, “knowing that every preacher has virtues and limitations.”

The word of the Lord — whether in the Mass readings or the homily — is meant to “enter into the ears, to get to the heart and go to the hands by doing good works,” the pope said.

To get his message across, “Christ also needs the words of the priest who gives the homily after the Gospel” reading, he said.

A Gospel passage is read at Mass not simply to tell people about events in the past, the pope said. “We listen to the Gospel in order to become aware of what Jesus did and said once” in order to reflect on how he is saying it again to everyone today.

As St. Augustine said, the pope commented, “the mouth of Christ is the Gospel” and though he may reign in heaven, he never ceases to speak to those on earth.

Christ must always be at the center of everything during the Mass, the pope said, but the people must also respond to Christ in some way in their lives.

“Therefore, if we listen to the ‘good news,’ we will be converted and transformed by this and consequently be capable of changing ourselves and the world,” he said.

NEXT: Pope asks people to work together to end human trafficking