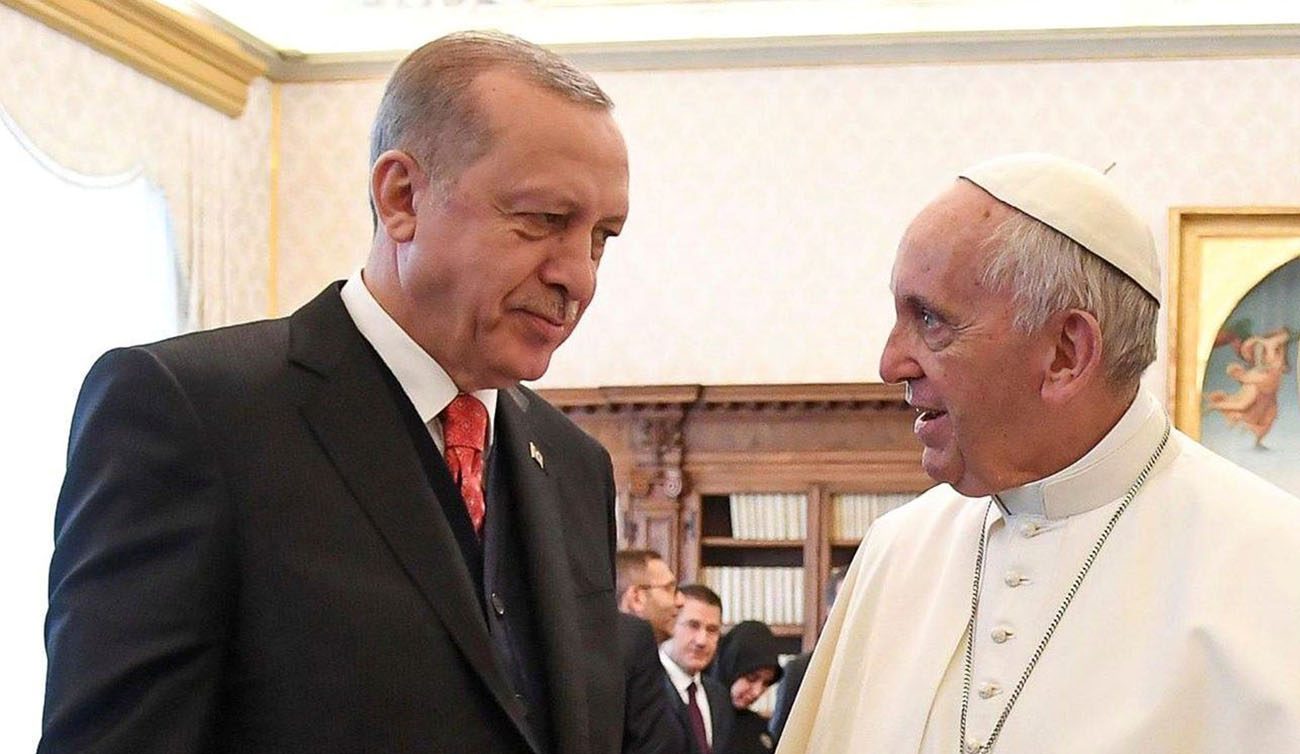 VATICAN CITY (CNS) — Pope Francis welcomed Turkish President Recep Tayyip Erdogan to the Vatican Feb. 5 for a private discussion that included the status of Jerusalem and the need to achieve peace in the Middle East through dialogue and respect for human rights.

During a 50-minute meeting, the two leaders discussed the current situation in Turkey, “the condition of the Catholic community, efforts in the reception of the many refugees and the challenges linked to this,” the Vatican said in a statement.

Aided by interpreters, Pope Francis and Erdogan also focused on “the situation in the Middle East, with particular reference to the status of Jerusalem, highlighting the need to promote peace and stability in the region through dialogue and negotiation, with respect for human rights and international law.”

Erdogan arrived in Rome amid heavy security measures for a two-day visit that was to include meetings with Italian authorities and business leaders. More than 3,000 police officers had been deployed for the visit, according to Agence France-Presse, and demonstrations had been banned in Rome’s center for 24 hours.

“Ah, matters of the mystics,” the pope replied, according to a pool report.

The Turkish president also gave the pope a large panoramic image of the city of Istanbul hand-painted on ceramic tiles.

Pope Francis then gave Erdogan a large bronze medallion of an “angel of peace,” who, the pope said, “strangles the demon of war.”

“This is a symbol of a world founded on peace and justice,” the pope continued.

The pope also gave the president a copy of his encyclical letter, “Laudato Si'” on the care of creation, his 2018 message for the World Day of Peace and an engraving of what St. Peter’s Basilica and the square looked like in the 17th century.

Speaking to reporters at Istanbul’s airport prior to his departure for Rome, Erdogan said his visit to the Vatican to see the pope — the first by a Turkish president in 59 years — was “a significant opportunity to draw attention to common human values.”

He said he planned to discuss the status of Jerusalem, the situation in Palestine, Syria and Iraq, as well as “counterterrorism, refugee issues and humanitarian aid,” according to Anadolu Agency, the state-run news service. The rise of Islamophobia in the West and “cultural racism” were also topics he planned to bring up, the agency reported.

Erdogan had telephoned the pope in December to discuss his concern over the status of Jerusalem after U.S. President Donald Trump announced Dec. 6 that he was formally recognizing Jerusalem as Israel’s capital.

Pope Francis has repeatedly upheld Vatican calls for a special, internationally guaranteed statute on the status of Jerusalem as the only way to preserve its unique identity as a place considered holy by Christians, Jews and Muslims.

The pope has publicly appealed for respect for the “status quo” of Jerusalem and prayed that “wisdom and prudence would prevail to avoid adding new elements of tension in a world already shaken and scarred by many cruel conflicts.”