Admissions not affected by gun-law protests, some Catholic colleges say 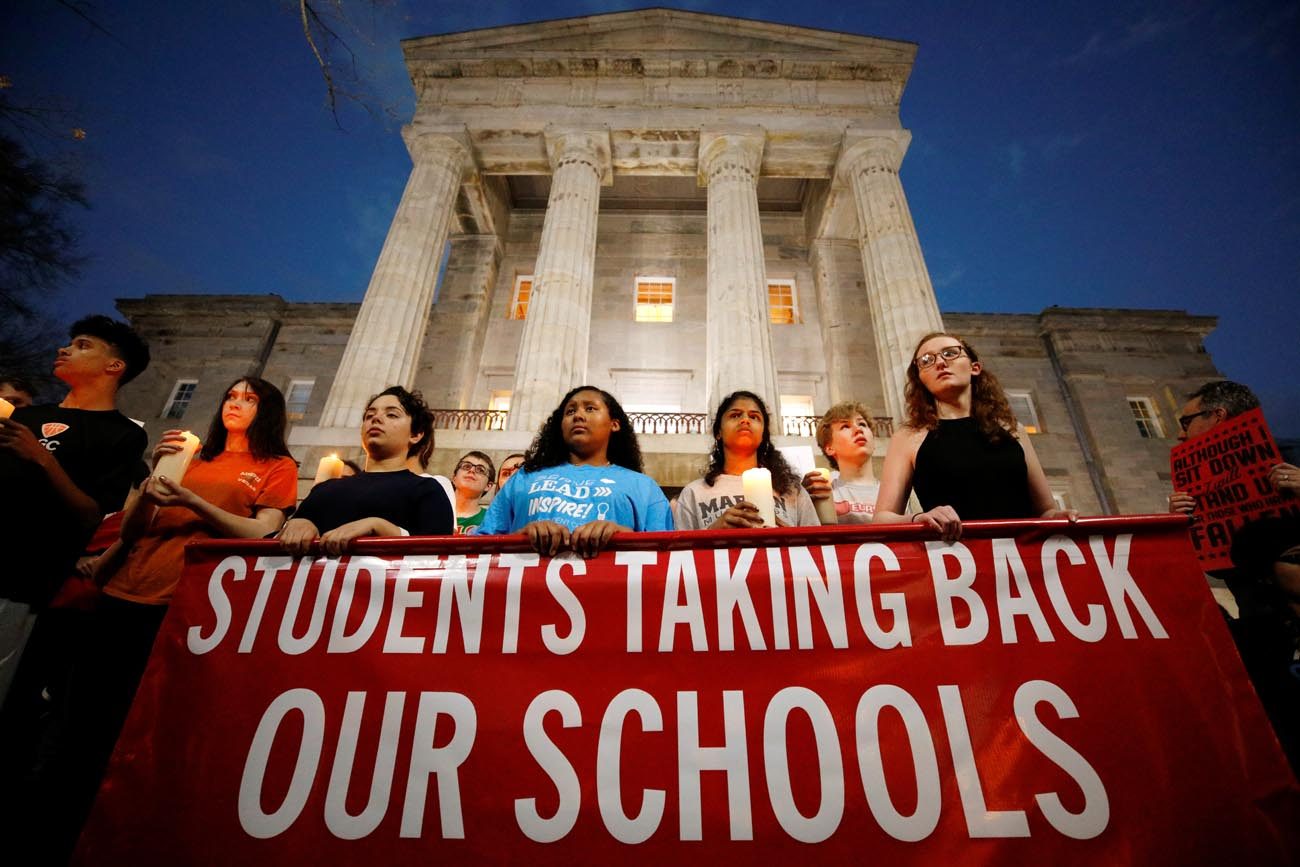 High school students hold candles in front of the North Carolina Capitol in Raleigh Feb. 20 in memory of the victims of the shooting at Marjory Stoneman Douglas High School in Parkland, Fla. The students were calling for safer gun laws after 17 people were killed when 19-year-old former student Nikolas Cruz stormed the Parkland school Feb. 14 with an AR-15 semi-automatic style weapon. (CNS photo/Jonathan Drake, Reuters)

Statements on Twitter, school websites and blogs have assured high school seniors and future college applicants that they would not be adversely affected by joining in peaceful protests on this issue.

Many college statements went a step further by encouraging students to speak out.

Loyola University Chicago said in a Feb. 26 statement that the school is “deeply rooted in the Jesuit, Catholic tradition of social responsibility through critical thinking and informed actions. We encourage students to become engaged citizens who take seriously how they express themselves and how they choose to be in the world. We encourage students to find their voice and use it for a greater common good — to be people for and with others.”

Other colleges similarly spoke of their school’s religious tradition in defending the students’ protests.

“As an Augustinian Catholic university, we believe that an individual’s rights to express their own personal viewpoints in a civil manner is paramount,” said a Feb. 26 tweet posted by Villanova University, outside of Philadelphia.

And just to be clear about what this meant technically for student applicants, another Villanova tweet said: “No student who is admitted or has a pending application will be affected by disciplinary actions arising out of engaging in a lawful and peaceful protest.”

The student concern is a valid one because several high schools have said students will face disciplinary actions such as suspension or expulsion for taking part in gun-control protests during school hours and college applicants must disclose if they have ever faced school disciplinary measures.

The Common Application, an online college application form used by more than 700 colleges and universities, specifically asks college applicants if they have “ever been found responsible for a disciplinary violation at any educational institution” during high school. “These actions could include, but are not limited to: probation, suspension, removal, dismissal, or expulsion from the institution,” it says.

Some Catholic colleges specifically addressed the issue of high school disciplinary action against these students, and said they would not hold that against them.

A Feb. 26 tweet by the University of Notre Dame said: “The Office of Undergraduate Admissions respects a student’s right to participate in peaceful protests and demonstrations. Students will not be negatively impacted in our admissions process if they choose to participate in such protests and are disciplined by their high schools.”

And the Loyola University Chicago statement said it would not penalize “nor rescind any admission decision for applicants who choose to protest peacefully against gun violence, even if that action is contrary to their high school’s disciplinary policy.”

Patricia McGuire, president of Trinity Washington University, similarly defended student protesters of current gun laws in a Feb. 26 blog and assured them it would not harm their application process.

“Let me be clear about Trinity’s policy: Trinity welcomes all courageous students who stand for justice, and we will never take a negative admissions action because a student has exercised the right to free speech and expression,” she wrote.

She also said the school has a long history of students and graduates never hesitating to “disturb the peace when glaring injustice demands our voices and our action.”

On Feb. 21, the day students protested current gun-control legislation in front of the White House, at least two Catholic college officials were among the first to say their schools would not punish these applicants.

Jon Boeckenstedt, associate vice president for enrollment management and marketing at DePaul University in Chicago, founded by Vincentians, tweeted: “Dear Students: If you participate in protests against gun violence and incur school discipline for walking out (of class), you can rest assured you can report it to DePaul and we won’t hold it against you.”

The colleges not only supported these activist applicants, but they also commended the Parkland high school students for quickly mobilizing to promote gun-control legislation in the wake of the Feb. 14 shooting at Marjory Stoneman Douglas High School that killed 17 people.

A statement on the website of Connecticut’s Jesuit-run Fairfield University said the university “joins colleges and universities around the country in mourning the victims of the tragic shooting at Marjory Stoneman Douglas High School. We also extend our admiration and support to the students who are channeling their grief at the loss of their teachers and classmates into constructive dialogue and action.”

McGuire also praised the Parkland students and youths “demanding a change in the nation’s gun laws. They are the future leaders of this nation and deserve respect and admiration for their courage,” she said.

The school leaders noted that this protest was different from others because it was led by young people.

“This is not the is not the first time students have protested, and it will not be the last,” said the president of St. Louis University, Fred Pestello, in a statement on the school’s website. He also said the Jesuit-run university would be rewriting its admissions policy to reflect that applicants would “not be impacted if they report high school disciplinary actions resulting from exercising their first amendment right to peaceably assemble.”

Another school president urged applicants and students to do more than protest.

Jesuit Father Joseph McShane, president of New York’s Fordham University, said the university “strongly advocates that our students turn their concern into action by leading letter-writing campaigns to Washington and to the legislatures in their home states. This is an essential step if we wish to effect change,” he added.

He said the university recognizes it is “not only a civic responsibility to curtail gun violence, but a mandate dictated by Catholic, Jesuit teachings on the sanctity of life.”

PREVIOUS: Son’s meeting with birth mother who nearly aborted him made into film

NEXT: Time is now to address gun violence in ‘comprehensive way,’ say bishops