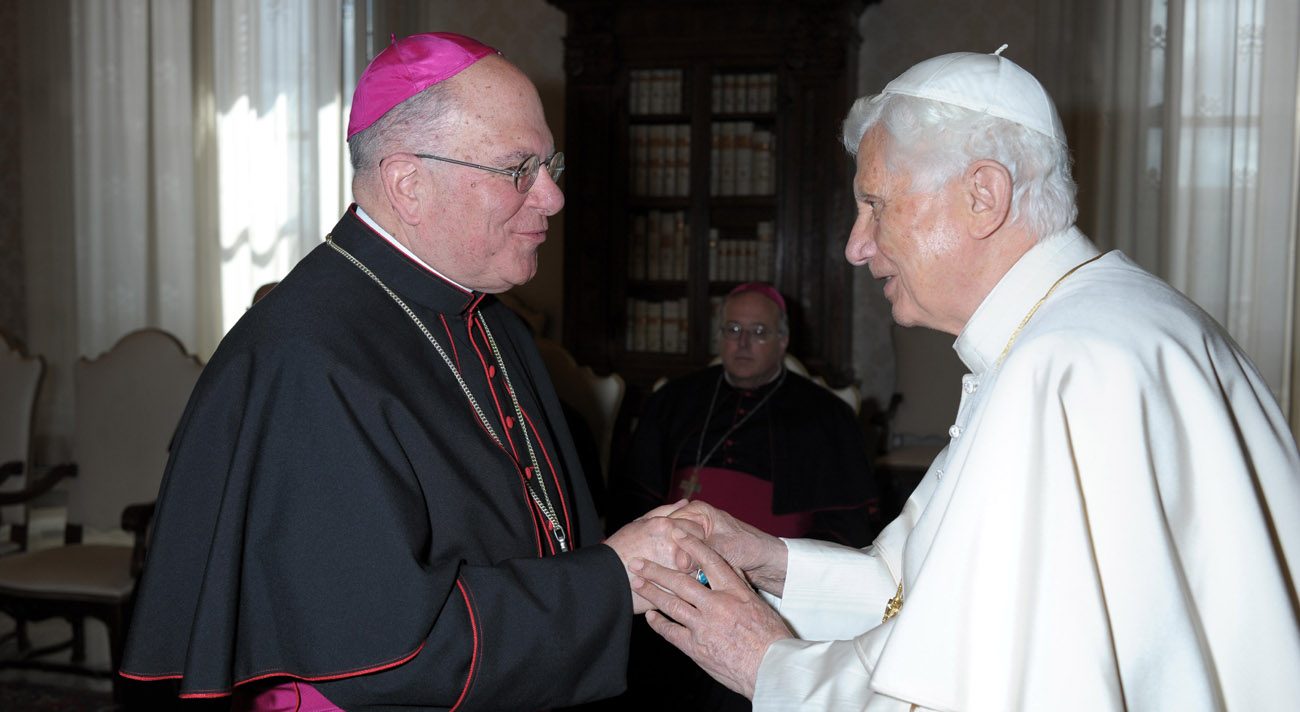 Pope Benedict XVI greets Bishop Joseph A. Pepe of Las Vegas at the Vatican in this 2012 file photo. Pope Francis has accepted the resignation of 75-year-old bishop and has named Bishop George L. Thomas of Helena, Mont., to succeed him. (CNS photo/L'Osservatore Romano)

WASHINGTON (CNS) — Pope Francis has accepted the resignation of 75-year-old Bishop Joseph A. Pepe of Las Vegas and has named Bishop George L. Thomas of Helena, Montana, to succeed him.

The resignation of Bishop Pepe and the appointment of Bishop Thomas were announced in Washington Feb. 28 by Archbishop Christophe Pierre, apostolic nuncio to the United States.

Bishop Pepe had led the Diocese of Las Vegas since 2001. Bishop Thomas, 67, was named bishop of the western Montana diocese in 2004. He will be installed in Las Vegas May 15.

“It is difficult to leave Montana,” Bishop Thomas said in a statement. “But, Pope Francis requests that each bishop possess a generous missionary spirit. In light of the Holy Father’s request and with humble thanks for the confidence he places in me, I joyfully accept this appointment.”

George Leo Thomas was born May 19, 1950, in Anaconda, Montana, and raised in nearby Butte. He is a graduate of the Diocese of Helena’s Carroll College, where he received a bachelor of arts degree in literature in 1972. His family relocated to Seattle and he entered St. Thomas Seminary, in Bothell, Washington, where he earned a master of divinity degree. 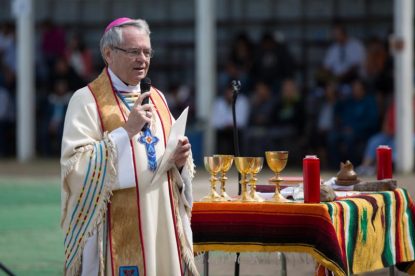 In 1981, he entered graduate school at the University of Washington where he earned master’s degrees in counseling and community mental health, in 1983. He earned a doctor of philosophy degree with an area of specialty in Pacific Northwest mission history in 1986.

He was ordained as a priest for the Archdiocese of Seattle May 22, 1976. He served in four different parishes, was chairman of the board of Catholic Community Services and the Archdiocesan Housing Authority, was chaplain at King County Jail and Seattle City Jail, and chaplain to the Missionary Sisters of the Sacred Heart in Seattle.

During his tenure in Helena, youth, young adult and campus ministry has seen great growth. He also dedicated three new churches, ordained 18 permanent deacons and 14 priests for the Diocese of Helena. He is known for his pastoral presence to his priests and seminarians. He helped reinvigorate and give greater visibility to the diocese’s Guatemala mission, with its Clinica Maxena and Asuncion School.

Bishop Thomas shepherded the diocese through a difficult clergy sexual abuse crisis involving some abuse claims that dated back 60 years. In January 2014, the diocese filed for bankruptcy protection to resolve 362 claims of abuse of minors by diocesan priests, religious community priests, women religious and lay workers that have been filed.

Under the terms of the bankruptcy protection sought by the diocese, a settlement of $15 million was paid out to victims who had been identified, and set up a fund of $2.5 million to provide compensation to any victims who came forward later and to cover other costs.

A bankruptcy judge characterized the diocese’s model of pastoral care and mediation as the most “singular achievement” he had seen in his 30 years on the bench handling bankruptcy cases.

In addition to serving on numerous boards and committees in the Diocese of Helena, Bishop Thomas is the chancellor of Carroll College, a board member of the Catholic Health Association and of the Catholic Extension Society, based in Chicago.

Joseph Anthony Pepe, a Philadelphia native who was ordained a priest for the Archdiocese of Philadelphia in 1970, is a member of the board of directors of the Catholic Legal Immigration Network Inc. and serves on several other boards and committees, including the board of trustees for The Catholic University of America in Washington. He is a board member of the International Dominican Foundation and Sanctuary of Culture Foundation, a member of the executive committee of the Papal Foundation and one of the advisers for the sainthood cause of Archbishop Fulton J. Sheen.

PREVIOUS: Pastoral draws attention back to ‘God’s design for the human family’