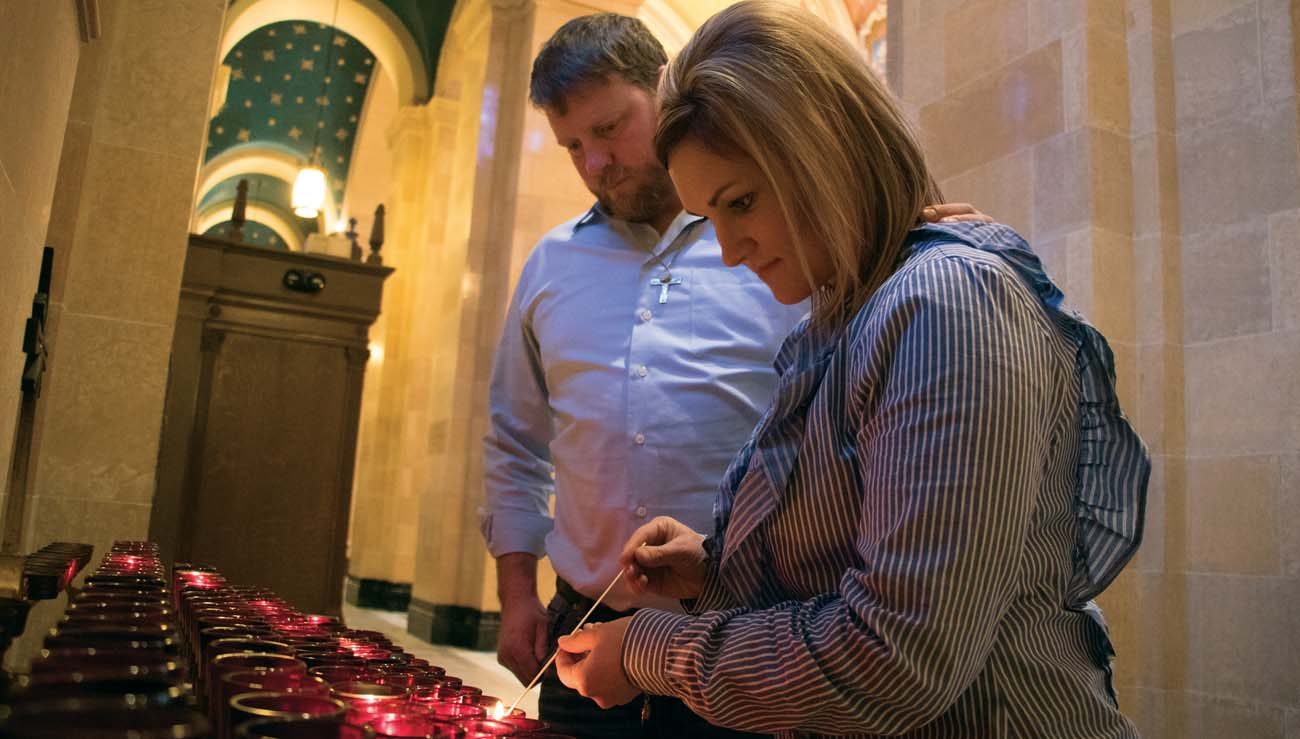 Chelsie Promes, alongside her husband, Jeremy, lights a votive candle after experiencing the Rite of Election Feb. 18 at St. Cecilia Cathedral in Omaha, Neb. A member of St. Boniface Parish in Menominee, Chelsie is preparing through the Rite of Christian Initiation of Adults for confirmation and first Communion at the Easter Vigil. (CNS photo/Joe Ruff, Catholic Voice)

OMAHA, Neb. (CNS) — It’s brought order out of chaos, meaning to a life that had become dry and mechanical, and a closeness to Christ that Chelsie Promes could not have imagined.

It’s the Rite of Christian Initiation of Adults — entry into full communion with the Catholic Church through months of classes and prayer that culminates with baptisms, confirmations and first Communions at Easter Vigils in parishes across the archdiocese.

“It has opened my eyes to seeing that God is always present,” Promes said of her growth in faith as she prepares to join the church. “He loves me. He is my first love. He’s given me a way of life. I can tell that by living through him, knowing he is at my side.”

Father James Keiter, pastor of St. Boniface Parish in Menominee, where Promes and her husband are members, said Promes is one of three people he is helping prepare for full communion with the church. Her husband, Jeremy, also is attending the classes.

“She’s on fire! Such a genuine joy as she learns about the faith,” said Father Keiter, who also is pastor of St. John the Baptist Parish in Fordyce and St. Joseph Parish in Constance. “Her husband is Catholic born and raised, and he has questions, too.”

Accompanied by her husband, Promes — and about 470 others — took an important step in the process of joining the church Feb. 18 at the Rite of Election with Archbishop George J. Lucas at St. Cecilia Cathedral in Omaha.

They were greeted by the archbishop and publicly declared their desire to be Catholic, at an afternoon ceremony for Promes and others from mostly rural parishes, and an evening ceremony for people in the Omaha area.

More than 320 of them, including Promes, are celebrating the call to continuing conversion — those seeking the sacraments of confirmation and first Communion. About 145 are the elect — those who hope to be baptized, confirmed and receive the Eucharist.

The statewide Diocese of Cheyenne, Wyoming, reported 27 catechumens and 25 candidates. Father Rob Spaulding, who heads the Office of Worship, noted in an email to Catholic News Service late Feb. 28 that the diocese always faces the challenge of geography to bring people together for the Rite of Election, and this year had the added challenge of a significant storm affecting participation. So only 11 catechumens and nine candidates were able to attend.

In Omaha, Promes said of the rite at the cathedral there, “It was amazing.” And of meeting Archbishop Lucas, she added: “He was very welcoming, very humble.”

Promes said she was baptized as a Methodist, her mother is a Christian who doesn’t go to church and her father attends a nondenominational church. And for years, religion did not have a real place in her life.

In 2012 she married — in a nonchurch ceremony and commitment that left her feeling compromised — and seven months later, she was divorced.

Her ex-husband suffered from depression and anxiety, had anger issues and seemed lost, Promes said. She was lost, too, and kept feeling the pull to something with more meaning.

“I thought I was compromising,” Promes told the Catholic Voice, Omaha’s archdiocesan newspaper. For example, “we never took marriage classes on kids and money,” she said. “We should have done that beforehand. … I was lost and he was lost as well.”

After her divorce, she asked friends who were Catholic about the church, and then she met her now-husband, Jeremy, who is Catholic and said the faith was important to him, though he was not practicing it as he felt he should.

Finding the church and its teachings has brought new meaning to her life, and helped put things into their proper perspective, Promes said.

“Before, my life was pretty chaotic. It was unorganized, I wasn’t living for any meaning. I was going through the motions of life: Getting up, cleaning the house, going to bed. I didn’t take time out for prayer, for God. Now, that has become a big part of my life.”

Church teaching and beliefs offer structure and truths, and centuries of faith from the apostles through today’s bishops, Promes said. There are beautiful churches with Stations of the Cross, stained-glass windows of symbols and saints, all telling the same story, but in different ways, of finding life in Christ, she said.

She and Jeremy dated for three years and married last August. She insisted that religion play a major role in their relationship, Promes said.

“I didn’t want to go through another marriage where God is not the center of our marriage,” she said. “I think it opened his eyes to the need to have God at the center.”

Determined to adhere to church teaching, Chelsie strove for and obtained an annulment of her first marriage, but not in time for the May wedding she and her husband had hoped for, the one that would have landed on the 70th wedding anniversary of Jeremy’s grandparents on his mother’s side.

The annulment was granted that same month, however, and they married three months later, at St. Boniface Church, with a reception in the parish hall.

Father Keiter, who presided at the wedding, said he met Chelsie and Jeremy when they were dating and considering marriage. He was impressed with their faith and patience about the wedding.

“She needed an annulment, and they were patient and willing to do God’s will,” he said.

“That was very important,” she said. “We both had time to reflect … to get to know each other on another level.”

One month after the wedding, RCIA started.

“We get handouts every week and Scripture” readings that they can reflect on and apply to daily life, Promes said. She and her husband pray together each evening, often from a book of devotions to Jesus.

Wrapped in faith and experienced through RCIA, Advent and Christmas also took on new meaning, Promes said. “It never was this emotional,” she said.

Jeremy said he is learning a great deal, too.

“It’s a lot of (information) I went through years ago, things I didn’t remember,” he said. “It’s brought me back, basically, to the Catholic faith.”

And Chelsie is excited about the Easter Vigil, when she will be confirmed and receive the Eucharist for the first time.

“I will feel a lot closer to Christ,” she said. “And like Advent prepares us for Christmas, RCIA is preparing me to be one step closer to Christ, to that Catholic faith, and being able to live it every day.”

NEXT: Bishop listens to DACA recipients’ stories, says: ‘We are with you’