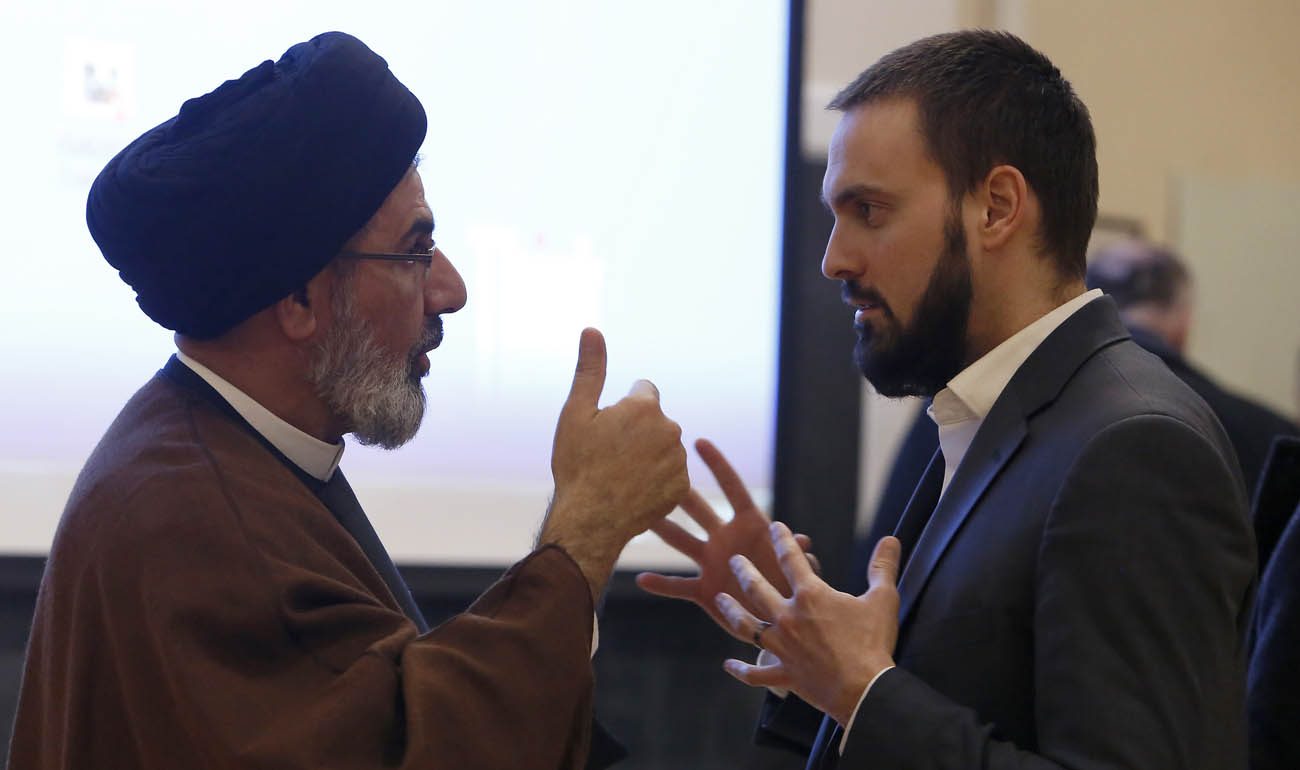 Participants have a discussion March 7 after a meeting of the National Catholic-Muslim Dialogue at the University of St. Mary of the Lake/Mundelein Seminary in Illinois. Rita George-Tvrtkovic, associate professor of theology at Benedictine University in Lisle, Ill., and Irfan Omar, associate professor of theology at Marquette University in Milwaukee, were guest lecturers for the March 6-8 dialogue session. This year's topic was "One God, One Humanity: Confronting Religious Prejudice." (CNS photo/Karen Callaway, Chicago Catholic)

MUNDELEIN, Ill. (CNS) — Taking on the issue of religious prejudice, the National Muslim and Catholic Dialogue met for the third time at University of St. Mary of the Lake/Mundelein Seminary March 6-8.

Announced in February 2016, the national dialogue, which is sponsored by the U.S. Conference of Catholic Bishops’ Committee on Ecumenical and Interreligious Affairs, aims to show public support for Islamic American communities.

It builds on three regional Catholic-Muslim dialogues — mid-Atlantic, Midwest and West Coast — that have taken place for more than 20 years.

“We have to begin with our own attitudes — not just Catholics who are prejudiced, but I also mean my attitude towards my fellow Catholics who I may perceive as Islamophobic. After all, it’s difficult to approach our coreligionists to tell them we think their views are incorrect and un-Catholic,” she said. “We know this is not easy, since there are several New Testament verses on how to correct your fellow Christians.”

Taking a gentle, one-on-one approach to help people understand the church’s teaching toward Islam, which is outlined in the Second Vatican Council’s document “Nostra Aetate” (Declaration on the Relationship of the Church to Non-Christian Religions), is a good place to start, she said. Another approach is sharing the church’s teaching with children in catechetical materials before they may form a prejudice.

When trying to root out religious prejudice outside of Catholicism and Islam, we must be careful not to create an “us versus them” view, George-Tvrtkovic said.

“Sometimes I hear Christians and Muslims say they are allies because they are both fighting against a common enemy, the secular or the godless. But actually, we need to convert the secular and godless from religious prejudice, too,” she said. “Both Catholics and Muslims need to pay attention to the arguments of the non-religious. Many nonreligious — especially millennials — are formerly members of our communities. Others have never had any connection to any religion.”

When trying to root out prejudice between Catholics and Muslims, we should turn to Mary, she said.

“Mary in particular has the potential as an interreligious bridge between Catholics and Muslims in a way that Jesus Christ could never be, since she’s a dividing line between the two religions,” she said.

“Mary also has potential to be an intrareligious bridge between Catholics and Protestants — and between different sorts of Muslims — but she has also been an intrareligious problem in both religions, in terms of the disparity between popular piety, heterodoxy, orthodoxy,” she continued. “Intrareligiously, we disagree about Mary, and that might be an interesting conversation for Catholics and Muslims to have. Both of us have problems with Mary.”

In his remarks from an Islamic viewpoint, Omar said that interfaith dialogue is about humanizing and learning about the “other,” those holding different beliefs. He cited Muslim scholars who interpret the Quran as promoting religious diversity.

“The question that the Quran is concerned about is not whether diversity is good or bad, vis-a-vis a blessing. The questions that the Quran starts with or seems to be addressing are ‘How do we coexist with those that are different?'” Omar said. “How do we conduct ourselves in light of our difference when we’d be hard-pressed to find a sane person who would deny that we all live in a relational reality? We are related to each other in some form or fashion.”

We do this by acknowledging our differences and seeking to learn about each other. Inherent in this is celebrating those differences, he said.

While interreligious dialogue has come a long way over time, there is a new urgency today to address the danger of exclusivism – the view that one religion is superior to another.

“If one considers herself a person of faith today, remaining indifferent is not an option,” he said.

NEXT: National School Walkout is time of prayer for many Catholic schools