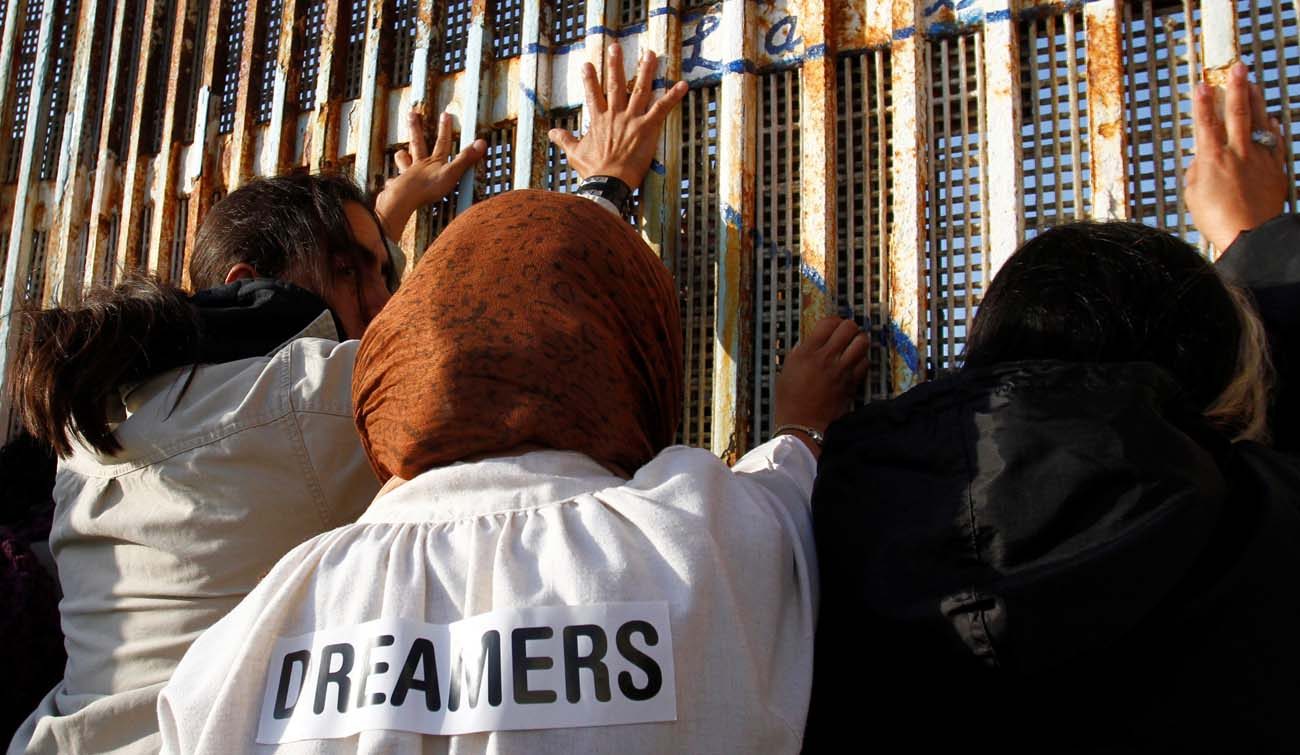 Young people on the Mexico side of the border near the steel fence in Tijuana, Mexico, Dec. 16, 2017. The "Dreamers" sign on one woman's blouse shows support for young immigrants trying to better their future. (CNS photo/Jorge Duenes, Reuters)

The nine-hour “funding lapse” of Feb. 9, like the three-day shutdown that began Jan. 20, hinged on how Congress was going to address the Deferred Action for Childhood Arrivals program that President Donald Trump said he would end March 5. He also called on Congress to pass a measure to save the program, created in 2012 by President Barack Obama via executive order.

In the January shutdown, Democratic lawmakers backed down on their threat to keep the government closed until a DACA deal was reached. In the February funding lapse, Democrats and Republicans agreed to conduct a debate and vote on DACA in the weeks to come, as a six-week continuing resolution to keep the government funded through March 23 was overshadowed by the $1 trillion spending package of which it was a part.

The congressional sidestepping of DACA prompted the U.S. bishops to declare a “National Call-In Day to Protect Dreamers” for Feb. 26, one week before the program’s expiration date. The day resulted in thousands of phone calls to lawmakers.

The justices’ action wiped out the March 5 deadline date, leaving DACA up and running at least until the high court accepts the case for the appeals court — and possibly renders a decision — or until Congress finally deals with it. The high court’s action only keeps DACA intact for those currently with DACA status; two federal judges have blocked Trump, saying the administration must continue to accept renewal applications for the program. The rulings do not make DACA available to those who had not already applied for it.

While the exact path ahead is unclear, at least there is a path.

“I think a lot of people feel a little insecure, they don’t feel safe and they’re unsure what’s going to happen because things are up in the air,” said Michelle Sardone, director of strategic initiatives for the Catholic Legal Immigration Network.

“They’re feeling fear about whether or not to apply: ‘Will the government use information they have on me to use against me?’ If you submit your application with the application fee, will it be adjudicated or … will it be a waste of your money?” Sardone said. “Each person has a particular case. They should go to an accredited legal services provider to find out the best situation for them and for their family.”

“We just buried a man in his 60s who came from Ireland in a house with no electricity, no plumbing. He came over to the U.S. without a trade, became a pipe fitter and a coach,” said Mary Harkenrider, a member of the Southside Catholic Peace and Justice Committee in Chicago, which sponsored a forum March 1 to show support for the city’s DACA holders.

In talking to Catholic News Service, she used the example of this Irishman to illustrate what immigrants bring to this country.

“As a coach and a family man, he affected people throughout the city and across the country and at his funeral there were thousands of people who pay respect to this immigrant, who came to this country without a STEM education or highly advanced skills,” Harkenrider added.

STEM stands for science, technology, engineering and mathematics. Some arguing for the reform of U.S. immigration laws say preference should be given to the highly educated immigrants.

She added: “We would be amiss without the talents of the immigrants in our communities. … whether it’s the Irish or the Polish or the Hispanic. I think we have to continue to recognize our history and build on it.”

Chicago, Harkenrider said, is “a city of immigrants.”

Nor is Chicago the only town that can claim that mantle.

Camden, New Jersey, is such a town. Mexican-born Monica Perez Reyes, 20, has lived there since her parents brought her to the United States at age 2. They entered the country without legal documents. She has kid sisters born in the United States who are U.S. citizens. As for Perez, “I’m good for two years” with DACA.

She admits to frustration with Congress, though. “I’m kind of offended. They’re sort of playing around with my future,” she said. “And the manner they’re handling it, one day they may say they’ll do something to make it better like have a path to citizens, ship, but the next day they say they’re going to terminate it altogether.”

Perez added, “I know some people are scared, but I’m not necessarily scared unless something is set in stone. I have a plan A, a plan B, a plan C. If worse comes to worst, I have a plan; I’ll have to go to Mexico and make my new life there.”

She was accepted to study art at a California college, but her status as an immigrant without documents left her ineligible to receive scholarship money. So Perez is attending community college in Camden while planning to major in art therapy, working to make money to pay her tuition.

Another such town of immigrants is Pasadena, Maryland. Hector Guzman, 19, also born in Mexico, was brought here by his parents, he said, when he was 1 year old. A soccer goalie and midfielder, a German scout recommended he go to England to try out for professional soccer there. He had to decline. “I could get there on my Mexican passport, but I couldn’t come back,” he said.

Guzman has his own plan B. Like Perez’s, it involves going to a community college and working as a butcher and chef to pay tuition. He’ll add landscaping work as the weather warms. He’s starting up a small business already. At some point, he said, he’d like to open a restaurant, maybe several of them, “and maybe have a ranch or a farm.” He said the DACA process was easy.

Guzman said he’s not worried. “My parents are a little worried,” he said. An older sister, who like him has DACA status, “doesn’t act like she’s worried,” he added.

How to deal with this interim period is “tricky, right?” said Ian Pajer-Rogers, communications and political director for Interfaith Worker Justice, which has more than 30 affiliated worker centers around the country.

“We have taken the position that only a clean DREAM Act will do with no riders or add-ons from the right — no wall, no border security measures. We’ll continue that. Where that leaves us with the party in power and the party that is trying to negotiate for our people, the Democrats, is less clear.”

The DREAM Act he referred to stands for the Development, Relief, and Education for Alien Minors Act. The bill is what gives DACA recipients the “Dreamer” name.

Anxiety among DACA families cuts both ways, he said. “What I’ve seen among the undocumented folks is a very willingness to self-sacrifice. Among the DACA recipients I’ve worked with they don’t want to trade their parents’ safety and security for their own. … I think you find the parents who are willing to say the opposite, almost. They’re willing to see more enforcement and risk detention if their kids are safe. We’re really going for the starting point that all are protected.”

“The more pressing thing might be the (Feb. 26) Supreme Court ruling,” Pajer-Rogers said, “that folks who are in detention can be detained indefinitely without bond. So if there’s something on the mind of workers today, it’s probably that.”