Washington Cardinal Donald W. Wuerl delivers the homily during a March 4 Mass at the Cathedral of St. Matthew the Apostle in Washington. During the Mass, he announced the release of "Sharing in the Joy of Love in Marriage and Family," a pastoral plan to implement Pope Francis' apostolic exhortation "Amoris Laetitia" ("The Joy of Love"). (CNS photo/Jaclyn Lippelmann, Catholic Standard)

WASHINGTON (CNS) — Cardinal Donald W. Wuerl has called on all parishes and individual Catholics in the Washington Archdiocese to help expand and strengthen the Catholic Church’s marriage and family outreach, guided by Pope Francis’ apostolic exhortation “Amoris Laetitia” (“The Joy of Love.”)

He was joined at a special Mass March 4 at the Cathedral of St. Matthew the Apostle by families from throughout the archdiocese for the release of his broad and detailed pastoral plan for implementing “Amoris Laetitia” at the parish level.

After Mass, the cardinal personally greeted the families in attendance — they represented the archdiocese’s 139 parishes in Washington and surrounding Maryland — and handed them copies of the plan, titled “Sharing in the Joy of Love in Marriage and Family.”

Cardinal Wuerl in his homily invited local Catholics to join in that work. He said hoped the gesture of handing the plan to the families after Mass “will be a sign of the commitment of each parish to renew its efforts to share the joy of marriage and family life.

He said he also hope it would show the archdiocese’s “dedication to try to be there for all who may be facing difficulties, so that we — as Christ’s church — can accompany them on the journey.”

An archdiocesan statement said the cardinal’s pastoral plan is the first of its kind to implement “Amoris Laetitia” at the parish level.

(The Archdiocese of Philadelphia issued guidelines on implementing “Amoris” July 1, 2016, and distributed them to all clergy the archdiocese as well as seminarians and lay persons who work in marriage preparation and pastoral care.)

Printed copies in English and Spanish were sent to all the archdiocese’s parishes in preparation for the official release of the document. Cardinal Wuerl encouraged priests to read the plan and preach about it at all parish Masses the weekend of March 3-4.

The apostolic exhortation, released April 8, 2016, brings together the results of two synods of bishops convoked by Pope Francis in 2014 and 2015 to examine challenges facing married couples and families in today’s world.

The cardinal’s plan summarizes teaching on marriage and family life found in “Amoris Laetitia”; examines challenges faced by couples and families in contemporary culture; emphasizes Pope Francis’ call to accompany people where they are; offers specific ways that people at parishes can reach out to families in many different circumstances; and lists resources to support people in all stages of married and family life. 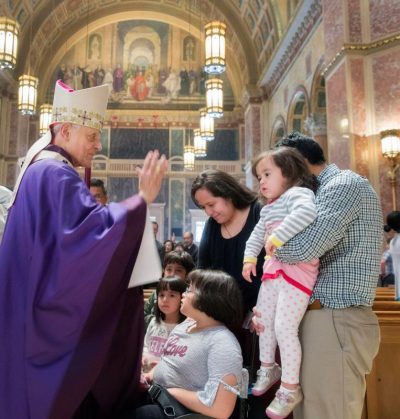 Washington Cardinal Donald W. Wuerl blesses a family following a March 4 Mass at the Cathedral of St. Matthew the Apostle in Washington. (“The Joy of Love”).(CNS photo/Jaclyn Lippelmann, Catholic Standard)

In his homily, Cardinal Wuerl noted how in that day’s Gospel reading, Jesus offered “gentle and consistent accompaniment” to the Samaritan woman at the well who had been married many times, an encounter that helped her experience Christ’s love and changed her life.

The cardinal said Pope Francis uses the story of that woman to illustrate how people who might be distant or detached from God on their life’s journey can experience God’s love when someone offers them patient accompaniment.

When carried out through the church’s pastoral ministry, such accompaniment, he said, “helps move us beyond hearing the Word, to come to understand it, to appreciate it, to appropriate and live it.”

Cardinal Wuerl shared the story of presiding at the archdiocese’s annual Mass honoring couples celebrating milestone wedding anniversaries. He noted a time when the gift bearers included a couple married more than 70 years, who were followed by their son and his wife marking their 50th anniversary and their granddaughter and her spouse marking their 25th anniversary.

That tableau, he said, offers a visible proclamation of the opening words of Pope Francis in “Amoris Laetitia”: “The joy of love experienced by families is also the joy of the church.”

But the cardinal noted that, “Not every marriage, however, goes forward with ‘they lived happily ever after.’ In fact, for many in our heavily secular culture today, there is little understanding of the true meaning of love, marriage, commitment and self-giving which are all part of the Catholic vision of love.”

Whatever the situation of other Catholics’ lives and circumstances, “we’re called to remember they are part of our family,” the cardinal said.

That reality, he said, underscores the call for Catholics to reach out people where they are and accompany them, and motivated him to issue the pastoral plan to strengthen marriage and family life.

“It is in the light of both the effort to experience the joy of love in marriage, and the challenge to address its brokenness when that happens, that we, in consultation with this whole archdiocesan church including laity, religious and clergy, offer the pastoral plan as our effort to share in the joy of love in marriage and family, and to be with others in their life’s journey,” Cardinal Wuerl said.

“As Pope Francis notes in ‘Amoris Laetitia,’ the church is a family of families, and the home of pastoral accompaniment is the parish,” the cardinal said. “The parish has a central role in making clear the Gospel vision for marriage and family life.”

Cardinal Wuerl noted the pastoral plan is intended to encourage reflection on the richness of the Church’s teaching on love, marriage, family, faith and mercy, and examines the role of conscience and the special role of parishes as places “where we find and experience Christ’s way of living and loving.”

In concluding his homily, Cardinal Wuerl invited the people of the archdiocese, represented by the families at the Mass, to help bring the pastoral plan to life “as we try to carry out our call to share the joy of love in marriage and family life.”

“May God walk with us and bless us” on that journey of celebrating marriage and family life and walking together with those who are struggling along the way, he said.

The March 4 Mass also marked a day of preparation for the 2018 World Meeting of Families Aug. 21-26 in Dublin. The theme of the international gathering, drawn from “Amoris Laetitia,” is “The Gospel of the Family: Joy for the World.”

Editor’s Note: “Sharing the Joy of Love in Marriage and Family” is available on the archdiocese’s website at http://adw.org/amorislaetitia in English and Spanish.

NEXT: Son’s meeting with birth mother who nearly aborted him made into film