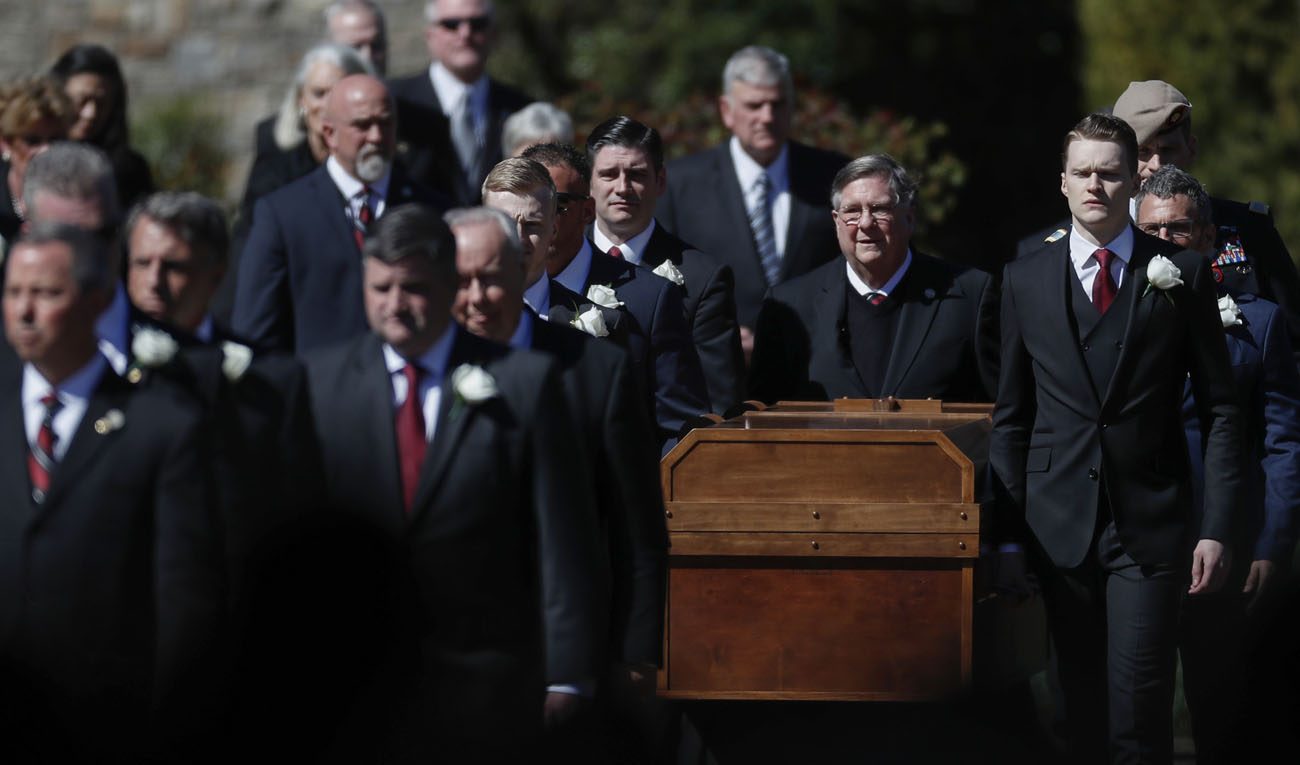 The 28,000-square-foot tent was reminiscent of the “canvas cathedral” in which the Southern Baptist preacher conducted his 1949 Los Angeles Crusade that propelled him onto the national stage. The tent blocked the windy weather for 2,000 invited guests who had gathered in front of the Billy Graham Library for the service.

At the funeral — what his family dubbed his “last crusade” — Rev. Graham was remembered as a tireless preacher of the Gospel and America’s best-known Christian evangelist. In the tradition of his revival-style crusades, speakers also used the occasion to repeat Rev. Graham’s call for people to repent and to accept Jesus Christ.

“My father’s greatest longing is granted,” said Franklin Graham, the late evangelist’s oldest son and head of the family’s worldwide ministry, the Billy Graham Evangelical Association. He delivered his sermon from the pulpit Rev. Graham once used at his famous crusades. “Today he’s in heaven. His journey is complete.”

He continued, “If this were your funeral, would you be in heaven? Are you sure? Jesus still calls us to follow him today.”

“The Bible says that God doesn’t want anyone to perish, but all should come to repentance,” the younger Graham said. “This motivated my father to preach the Gospel with urgency. He wanted to warn men and women of the consequences of sin.”

He repeated the Scripture verse from John 14:6 that Rev. Graham frequently quoted in his sermons: “Jesus answered, ‘I am the way, the truth and the life. No one comes to the Father except through me.'”

“This verse was probably in every message my father preached,” he said. Then he again called on people to repent, adding it was “no better time than right here at Billy Graham’s funeral.”

The service featured hymns sung or played by some of Rev. Graham’s favorite musicians, several of whom had accompanied him on his crusades.

Since his ministry began in 1947, Rev. Graham conducted more than 400 crusades on six continents and reached an estimated 215 million people. He stressed a personal relationship with Jesus Christ but did not steer people toward any particular church.

In a nod to Rev. Graham’s close ties to the Catholic Church, Cardinal Timothy M. Dolan of New York was there to pay his respects and remember the influence Rev. Graham had on his life and on Christianity in the United States.

“I grew up in a sound Catholic home, and yet my mom and dad and my grandparents loved listening to Billy,” Cardinal Dolan said.

In the 1950s and 1960s, Rev. Graham offered a message of hope in a world full of conflict, communist oppression and materialism, he said. “People naturally said, ‘Where do we go from here? Weapons don’t seem to be doing it, wars don’t seem to be accomplishing anything … where do we go?’ And Billy said, “You go to the Lord.’

“So for me, to have heard a man say that, let me tell you — he had an impact on me becoming a priest, because I said I’d like to do what he does.”

At his crusades, Rev. Graham’s staff connected people to their local Catholic Church, and he always made a point of reaching out to the local Catholic bishop wherever he traveled.

“He was able to have a political impact without being partisan,” Cardinal Dolan said.

Cardinal Dolan recalled Rev. Graham’s later expressions of regret in becoming too close to President Richard Nixon, forced to resign primarily for the Watergate scandal, and for criticizing John F. Kennedy as a Catholic running for the presidency.

“His humility and contrition there teaches us we have to be very careful about diluting our role as pastors, if we become partisan,” Cardinal Dolan said.

In a statement, Bishop Peter J. Jugis, who heads the Diocese of Charlotte and is a fellow native of Charlotte, called Rev. Graham “an inspiring example of a life lived in total dedication to Jesus Christ and His Gospel.”

Rev. Graham’s moral authority was instrumental in North Carolina’s approval of a constitutional amendment protecting marriage between one man and one woman. In the 2012 campaign, in one of his last public acts, Rev. Graham added his voice of support for traditional marriage to that of North Carolina’s two Catholic bishops and other faith leaders.

Although North Carolina voters overwhelmingly approved the amendment, it was struck down in 2015 by a U.S. Supreme Court decision legalizing same-sex marriage.

While his crusades took him to six continents, Rev. Graham’s love for his home in the mountains of North Carolina remained constant.

Rev. Graham’s body was transported by motorcade from his longtime home in Montreat, near Asheville, to Charlotte — a 130-mile route that recalled his childhood and early ministry.

Thousands of people lined the motorcade route, and thousands more paid their respects while his body lay in repose at the Billy Graham Library Feb. 26-27 and then in honor at the U.S. Capitol Feb. 28-March 1.

After the funeral, Rev. Graham’s coffin — a simple pine box crafted by prisoners at Louisiana State Penitentiary in Angola, the nation’s largest maximum-security prison — was interred next to his wife of 63 years, Ruth Bell Graham, at the foot of a cross-shaped walkway in a prayer garden next to the Billy Graham Library. Ruth Graham died in 2007.

The gravesite lies only four miles away from the site of the dairy farm where Rev. Graham grew up.

NEXT: Washington parishes learn of plan to implement ‘Amoris Laetitia’