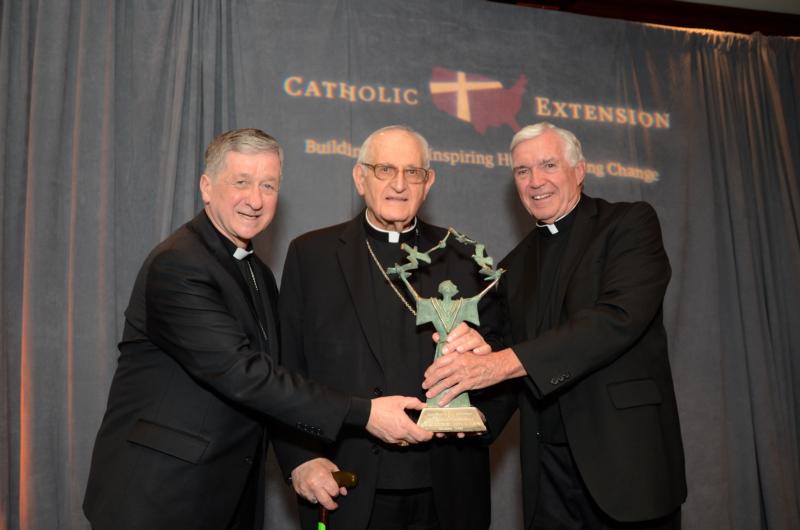 HOUSTON (CNS) — One of the hallmarks of the ministry of retired Archbishop Joseph A. Fiorenza of Galveston-Houston is “his concern that nobody is left behind — whether that’s the unborn or the poor, the migrant, the elderly or those who are sick.”

Chicago Cardinal Blase J. Cupich spoke those words as he presented the Catholic Extension’s Spirit of Francis Award to the archbishop for his leadership in the Catholic Church of Texas and an unwavering commitment to serving the poor and vulnerable.

The award, presented at a Feb. 24 dinner in Houston, is named for three church leaders known for embracing and reaching out to the poor: St. Francis of Assisi, Pope Francis and Father Francis Clement Kelley, founder in 1905 of Catholic Extension, a Chicago-based papal society.

Cardinal Cupich recalled that in a letter to Congress, Archbishop Fiorenza once wrote: “The needs of the poor and the most vulnerable must have first claim on our common efforts. The poor and the vulnerable can’t be left behind.”

Then-Bishop Fiorenza was named to head what was the Diocese of Galveston-Houston in 1985. When the diocese was elevated to an archdiocese in 2004, he was named an archbishop. He retired in 2006.

Before his appointment to Galveston-Houston, Bishop Fiorenza headed the Diocese of San Angelo, one of the 90 home mission dioceses helped by Catholic Extension.

“In the small towns of the diocese,” the archbishop said, “I witnessed how, without the help of Catholic Extension, those small faith communities would not have been able to continue as vibrant communities who were making a contribution to the welfare of the people in that area.”

Catholic Extension, he added, has been the “lifeblood” for many poor communities in the San Angelo Diocese, throughout the South and beyond.

The organization raises and distributes funds to support the U.S. mission dioceses, many of which are rural, cover a large geographic area, and have limited personnel and pastoral resources.

In his remarks, Catholic Extension’s president, Father Jack Wall, thanked Houstonians for being a “great inspiration” to the United States and the world because of “the great sense of solidarity with which you have walked and struggled through everything that happened in Hurricane Harvey.”

Large parts of the Beaumont Diocese — including Port Arthur, Beaumont and Orange — experienced catastrophic flooding during Hurricane Harvey. Many people, especially in the poorer areas, lost their homes and still live in trailers provided by the Federal Emergency Management Agency.

Bishop Guillory said that when he was growing up, he always looked for a rainbow after a storm.

“After Harvey,” he said, “I did not see a rainbow. But strangers coming together to help one another, families helping each other, you helping us in Beaumont and helping the people of Houston, that is the rainbow.”

People responded wonderfully after Harvey, “but the attention of the media is only short-lived,” added Bishop Guillory, who is a member of Catholic Extension’s board of governors.

“The tendency is for people to respond to the immediate needs, but then we move on to the next big story,” he said. “With these kinds of tragedies, it is the long-term that you really have to work and struggle through.” He commended Catholic Extension for its good response both in the short and the long term.

The most costliest damage in the diocese occurred at its Holy Family Retreat Center, where the flood water reached all the way up to the eaves of the roof.