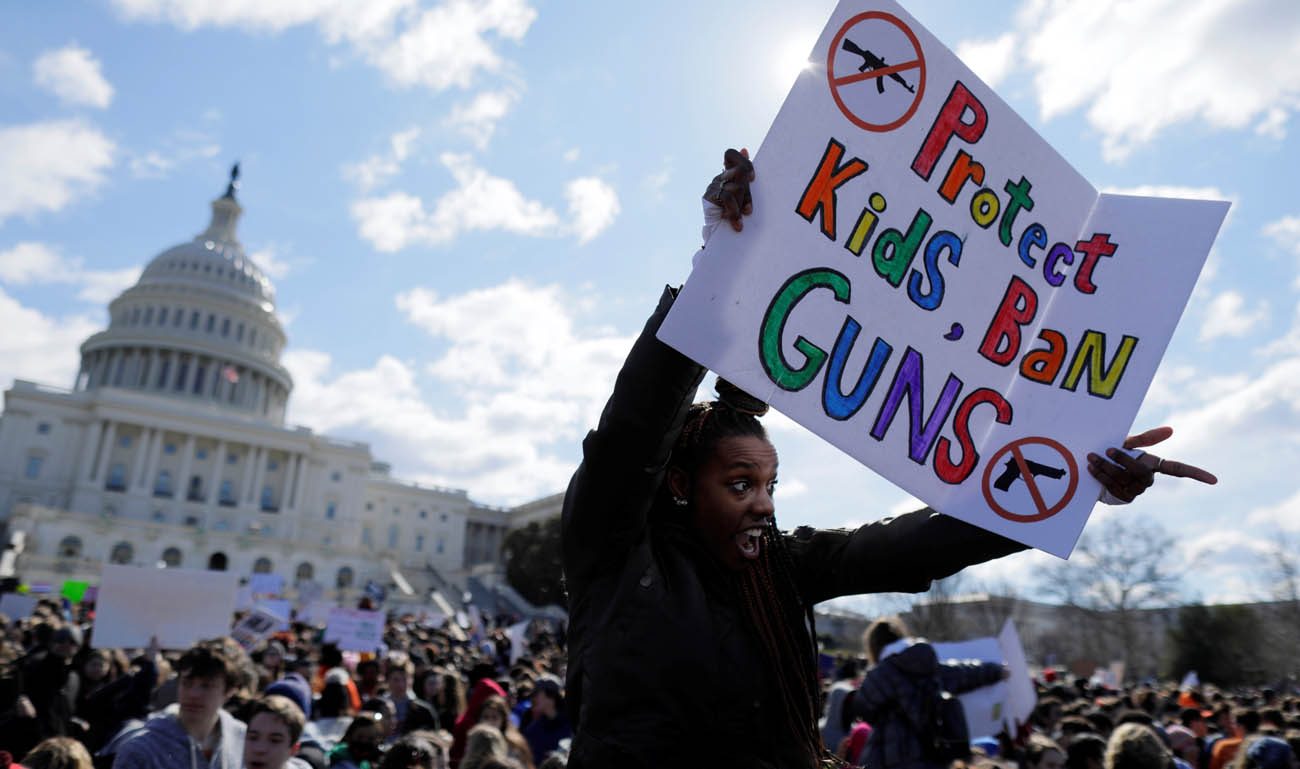 WASHINGTON (CNS) — Catholic school students across the country prayed with their school communities for school shooting victims or joined marches protesting gun violence March 14 during the National School Walkout, a student-led response to the Feb. 14 school shooting in Parkland, Florida.

In the Archdiocese of St. Paul and Minneapolis, more than 100 Highland Catholic middle school students, teachers and parents gathered on the school’s front steps in St. Paul for 17 minutes of silence and prayer. They lit 17 blue candles in memory of those who died at Marjory Stoneman Douglas High School and held signs in honor of each deceased individual.

She and fellow middle school student Lily Anderson organized the prayer service. Students also wrote petitions, which were prayed in the gym following the time of silence outside.

“We’ve been learning about Catholic social teaching and the life and the dignity of the human person,” Anderson said. “After that shooting, we just felt that it needed to be fixed and thought that we’d do something about it.”

Other Catholic schools around the Archdiocese of St. Paul and Minneapolis held similar observances March 14. Providence Academy in Plymouth also offered a symposium after school for juniors and seniors to discuss gun violence.

Students at Benilde-St. Margaret’s in St. Louis Park walked out of classes, although not as part of an official school event, to distribute information about legislators and voter registration for seniors. Students from Cretin-Derham Hall in St. Paul also walked out of classes that morning without the school’s sanction. The previous week some of these students had participated in a walkout with nearby public school students to the State Capitol in St. Paul to protest current gun laws.

The decision to hold a prayer service for peace in the wake of the Florida school shooting was an easy one for students at Christian Brothers College High School in St. Louis. Determining the place to have the service was even easier — the Blessed Mother Grotto, in front of Our Lady of Peace.

The prayer service was organized by students and led by the school’s campus minister, Dominican Father DePorres Durham, who told students this was the chance to recognize their pain and anxiety and “give voice to our suffering after the senseless act of another school shooting.”

The students and staff members who attended the prayer service, many wearing hoodies on a chilly but sunny morning, circled around the grotto on a high point of the campus overlooking the football stadium. They listened as the names of 27 schools impacted by shootings were read aloud and then were silent before reading reflections and praying the Our Father.

The presenters urged students to write a commitment to action and place it in a basket in the chapel. The suggestions included reaching out to someone at the school who may be experiencing difficulties or is picked on, expressing love and care to a family member, and more.

Danny White, a senior, said the prayer service was intended to show unity. “This was not about political action,” he said. “This was about standing in solidarity. As a Catholic school, we stand in solidarity through prayer and offering guidance from God.”

Father Durham said the grotto was selected because it is “a prayer place” and a site that has a long school tradition. “While this is obviously a very complex problem, one way we can begin is to simply treat each other better,” the campus minister said. “It begins with recognizing the dignity of everybody we live with and that we are responsible for each other.”

Students at Cardinal Ritter College Preparatory High School in St. Louis took to the streets for about an hour in support of the Parkland students.

Wearing orange arm bands or orange shirts, students, faculty and staff members marched about three-quarters of a mile carrying posters with messages such as “#StopTheViolence,” “Enough is enough” and “Blessed are the children.”

Posters remembered the victims in Florida and victims of gun violence in St. Louis. Freshman Malachi Davis made a poster with a photo of 17-year-old Nicholas Dworet from Parkland, accompanied by snippets of Nicholas’ plan after high school to pursue competitive swimming this fall in college.

The poster project drove home the harsh reality that Dworet “was really dead,” Davis said, adding that creating the poster “was hard. He didn’t deserve to lose his life. … I’m sure he didn’t wake up in morning thinking, ‘I’m going to die today.'”

He likewise couldn’t imagine the shooter “waking up thinking that he’s going to shoot another person and take their life. … It’s really sad. It makes me really think about life,” he added.

Students at Catholic high schools in the Diocese of Trenton, New Jersey, made prayer the focal point of their gatherings during the National School Walkout.

“Let’s pray for God to empower us to be the voices for those who cannot speak,” said Eileen Hart, moderator of the Celebrate Life Club at Notre Dame High School in Lawrenceville, New Jersey. School seniors Julianna Okupski and Trystan Crichton led almost 100 students and some adults in a prayer for victims and peace outside in the school’s grotto.

Trenton Bishop David M. O’Connell joined the students in prayer and said he was “deeply moved” to do so.

In a statement on the students’ efforts to address gun violence, Bishop O’Connell pointed to the U.S. Conference of Catholic Bishops, which is urging a halt to partisanship and calling on all to advance measures that will protect human life, especially students and educators.

“In its truest sense,” the bishop said, “the effort to curb gun violence reflects our church’s teaching about the need to respect the dignity and sanctity of every human life.”

He said the prayer services, like the one at Notre Dame, and “advocacy efforts that students in even more of our schools will pursue in the weeks to come, offer all of us a powerful witness. They serve to remind us that we are compelled to stand up for the protection of human life in all things and that we must begin all of our efforts with prayer, asking God to give us strength, patience, compassion and understanding.”

Bishop Edward J. Weisenburger of Tucson, Arizona, joined students at St. Augustine Catholic High School in Tucson when they prayed the rosary during the National School Walkout. Five other Catholic high schools in the diocese also participated in the event primarily by praying for the shooting victims.

At San Miguel Cristo Rey Catholic High School in Tucson, students not only gathered for prayer but they also wrote to their elected officials, researched information about gun control and had a mock debate.

Prior to the day’s events, Bishop Weisenburger said in a statement that students in the Tucson Diocese, “as in other parts of our country, are dealing with the devastating gun violence at schools and communities across the nation.”

“We hope to assist them as they find their place as faithful citizens of the United States, and as they find their way of coping constructively against a problem that has become widespread,” he said, adding that he was “pleased that level thinking, combined with compassion, prayer and faith are elements of our students’ events.”

In the Denver Archdiocese, where schools were holding special Masses, praying the rosary or holding prayer services March 14, Archbishop Samuel J. Aquila urged archdiocesan Catholic schools to use the time of prayer for the conversion of hearts and for the souls of those who died.

Elias Moo, Denver’s archdiocesan superintendent of Catholic Schools, echoed the bishop’s words, saying: “We believe the first and most important response can and should be to unite in prayer.”

Contributing to this report was Matthew Davis in St. Paul, Joseph Kenny in St. Louis and Jennifer Mauro in Trenton.