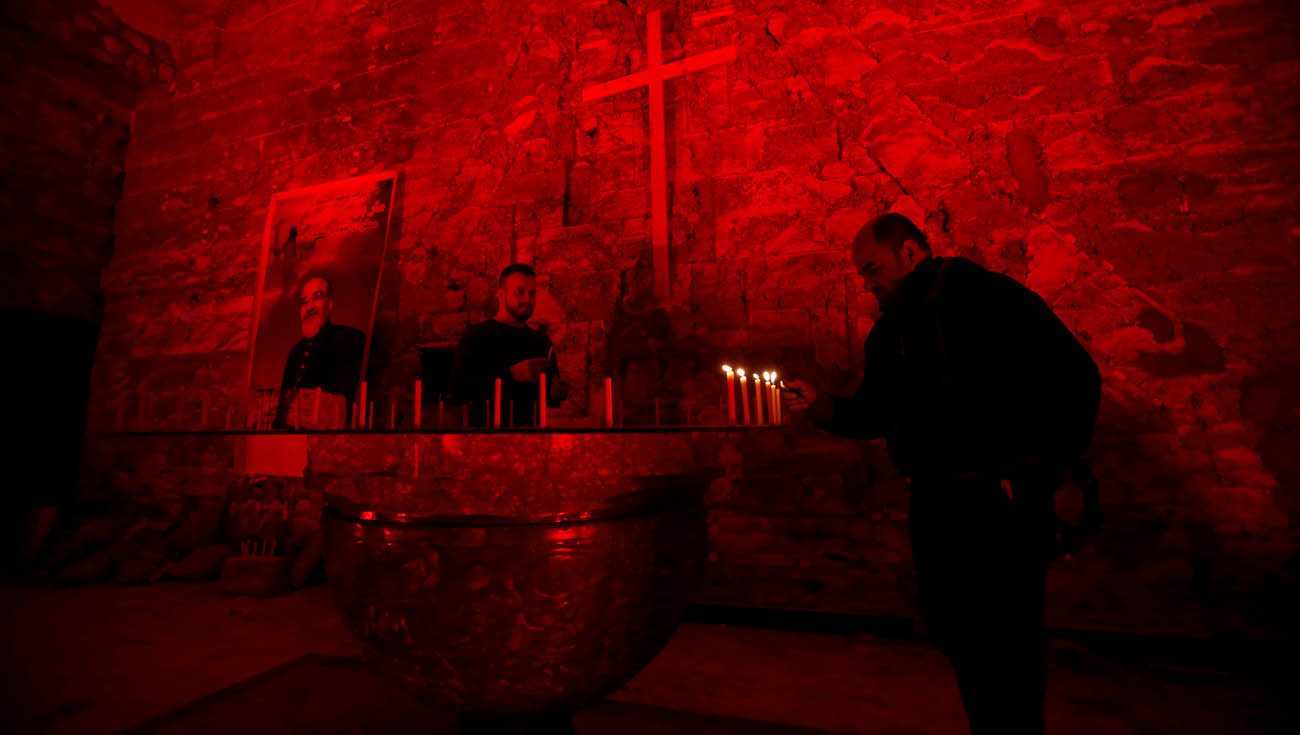 The Chaldean Catholic Church of St. Paul is in Mosul, Iraq, is illuminated Feb. 24 with red light in protest against the persecution of Christians around the world. (CNS photo/Khalid Al-Mousily, Reuters)

NEW YORK (CNS) — Four in 10 U.S. Catholics say that half or more of religiously based attacks around the world are directed at Christians and believe Christian persecution is “extremely severe” in North Korea, Iran, Iraq, Syria and Pakistan.

At the same time, when asked to rank their concerns about global issues, U.S. Catholics put Christian persecution last as the issue they are most concerned about.

At the top of the list of global concerns for the largest majority were human trafficking (86 percent) and poverty (also 86 percent). Next were climate change (74 percent) and the refugee crisis (also 74 percent). Then came Christian persecution; 69 percent said it was a top concern.

U.S. Catholics were asked for their views on global Christian persecution in a national survey conducted by the pontifical foundation Aid to the Church in Need — USA, based in New York, and McLaughlin & Associates, a national survey research company.

According to Aid to the Church in Need — USA, the survey aimed to measure how aware U.S. Catholics are of Christian persecution around the world; the countries and regions where they consider Christians the most severely persecuted; and specific measures and policies they want the U.S. and other Western governments to pursue to combat it.

They also were asked to what extent they feel Pope Francis, the U.S. bishops and their own parishes are making the issue of Christian persecution a priority and what actions they believe they can and should take themselves.

— Forty percent of Catholics acknowledge that Christian persecution around the world is “severe,” while 51 percent consider it to be “somewhat severe.”

— Almost half of U.S. Catholics say that Pope Francis is “very engaged” on the issue of Christian persecution, while only 27 percent think their local bishop is engaged and only 24 percent believe their parish is involved with the issue.

— A significant number of U.S. Catholics said they were unsure about the engagement level of the Catholic Church on the issue of Christian persecution.

Almost half of the respondents said they have not donated in the past year to an organization that comes to the aid of persecuted Christians.

“What the survey reveals quite clearly,” said George Marlin, chairman of Aid to the Church in Need — USA, “is that there is a need to increase the engagement level of the US Catholic Church when it comes to global Christian persecution — both at the grass-roots and leadership levels.”

“The issue has to become a priority,” he said in a statement accompanying the March 1 release of the survey results.

“What we hope our poll will do is show the bishops and their priests that the laity need more education and leadership to give them a stronger sense of the seriousness and pervasiveness of Christian persecution around the world. We have an obligation to raise our voice and stand up for persecuted Christians,” Marlin concluded.

The nationwide poll of 1,000 Catholic adults was conducted from Jan. 16-24. All interviews were conducted online. The margin of error is plus or minus 3.1 percentage points.

In terms of their religious beliefs, 27 percent identified themselves as liberal, 39 percent as moderate and 34 percent as conservative.