Hispanic Catholics seen as the emerging ‘voice, conscience’ of church 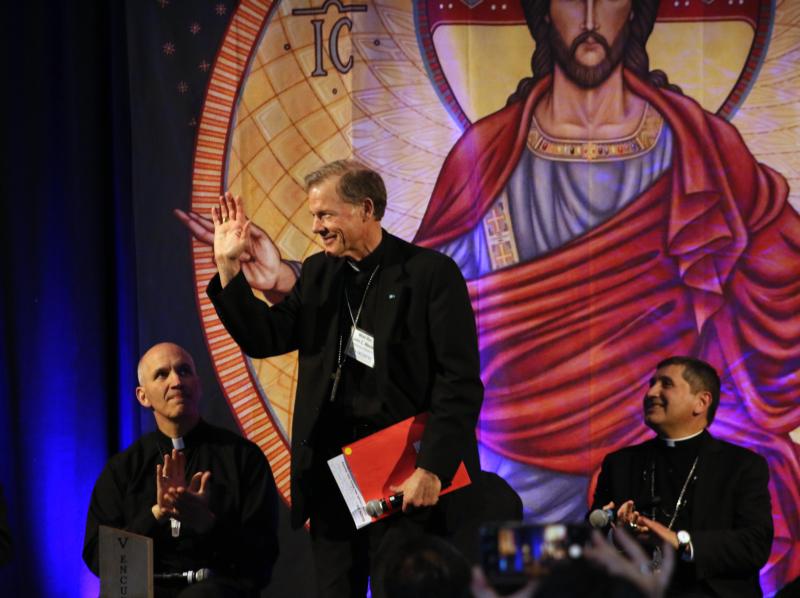 Archbishop John C. Wester of Santa Fe, N.M, waves after being introduced at a bishops’ panel Feb. 24 in Phoenix at the V Encuentro gathering for Region 13. At left is Bishop Steven Biegler of Cheyenne, Wyo., and to the right is Auxiliary Bishop Jorge Rodriguez-Pena of Denver. (CNS photo/Michael Brown, Catholic Outlook)

PHOENIX (CNS) — Hispanic Catholics are being called “to be the ecclesial voice and conscience of the church in the U.S.,” said Hosffman Ospino, a leading expert on the intersection of Catholicism and Latino culture.

“When the Hispanic Catholic community speaks, the church speaks,” he told participants in Phoenix for the Southwestern Regional Encuentro.

The Colombian-born Ospino, the final keynote speaker at the gathering, is an associate professor of theology and religious education at Boston College. He is a member of the leadership team for the U.S. Catholic Church’s Fifth National Encuentro, or “V Encuentro,” to be held Sept. 20-23 in Grapevine, Texas.

Leading up to the national encuentro has been a four-year process of reflection and action that included parish- and diocesan-level encuentros. Regional encuentros will be going on around the country through June.

The Feb. 23-25 regional in Phoenix drew about 480 delegates from 10 Catholic dioceses in Arizona, Colorado, New Mexico, Utah and Wyoming, which are in the U.S. church’s episcopal Region XIII. The delegates reviewed the diocesan reports and discussed recommendations for consideration in Grapevine in September.

Ospino spoke only in Spanish; there was simultaneous translation of his remarks. His topic was “Bearing Fruit,” on the beneficial effects of the integration of Spanish-speaking Catholics into American church life.

Ospino credited the U.S. bishops for organizing the national dialogues to discuss the relationship between the U.S. institutional church and Hispanic Catholics’ growing numbers and presence in the church.

He listed dynamics that show the fruit borne by the presence of Hispanic Catholics in the U.S. church over the years.

The U.S. bishops, seeing the influx of Hispanics from Central and South America, initiated “V Encuentro” to “clear space that allows you to express your prophetic voice without fear,” Ospino said. Now that they have spoken out, Hispanic Catholics “have the responsibility of acting.”

The U.S. church’s First National Encuentro was in 1972. For the upcoming “V Encuentro,” 163 dioceses and archdioceses and more than 2,500 parishes across the country are involved.

Ospino said another fruit for the church is the dominant role played by Hispanic women — “mothers, grandmothers, wives, even religious” – and he noted that most of the delegates attending were women. The future of the church, he added, lies in Hispanic youth, who demographically represent 60 percent of all Catholics under age 18.

While cautioning against “over-romanticizing” it, Ospino said the stability of the Hispanic family is another plus for the church, although that family unit is increasingly threatened by American cultural and economic pressures such as poverty, drug abuse and threats of deportations.

“Our families are deeply affected by these factors,” he said.

He also cited the advances made following the previous encuentros that have helped unify and empower Hispanic Catholic communities.

“It would be unfair, irresponsible to stay where we are at,” Ospino said. “This is a great step of historic proportions. We are making history in the U.S. church.”

Ospino said that in many ways, the U.S. Catholic Church was looking to the Southwest gathering and the dioceses from Region XIII to become the national model.

“We need a new way of being the church,” he added, especially in how young people are invited and encouraged to take on leadership roles. He also praised the region’s bishops and ministry leaders who have “rediscovered our calling to be missionary Catholics,” who go out to the peripheries to the forgotten and rejected.

Ospino noted that some may believe the rise of Hispanic leadership comes in unconventional ways, but the reality is that the Holy Spirit is guiding the process. “It may not always happen the way we are planning it. Let’s let ourselves be surprised by the work of the Holy Spirit,” he said.

As a theme throughout his address, he used the parable of the sower from Matthew’s Gospel. After decades of careful tending, the soil of the Hispanic Catholic community is heavy with plants bearing fruit and ready to serve the church.

“Your dioceses are the good and fruitful soil,” Ospino said. “Every baptized person is being called to evangelize.”

He outlined a series of historic events, beginning with the Second Vatican Council and including bishops’ gatherings at Medellin, Colombia, in 1968 and the 2007 meeting of bishops throughout the Americas at Aparecida, Brazil. Ospino said that “V Encuentro” marks a similar critical point in American Church history. He called on the leaders in the room to continue to move the conversation forward.

“When historians write about ‘V Encuentro’ 100 years from now, what will they write?” he asked.

NEXT: U.S. Catholics surveyed on perception of Christian persecution worldwide