At global forums, church leaders advocate for safe water for all 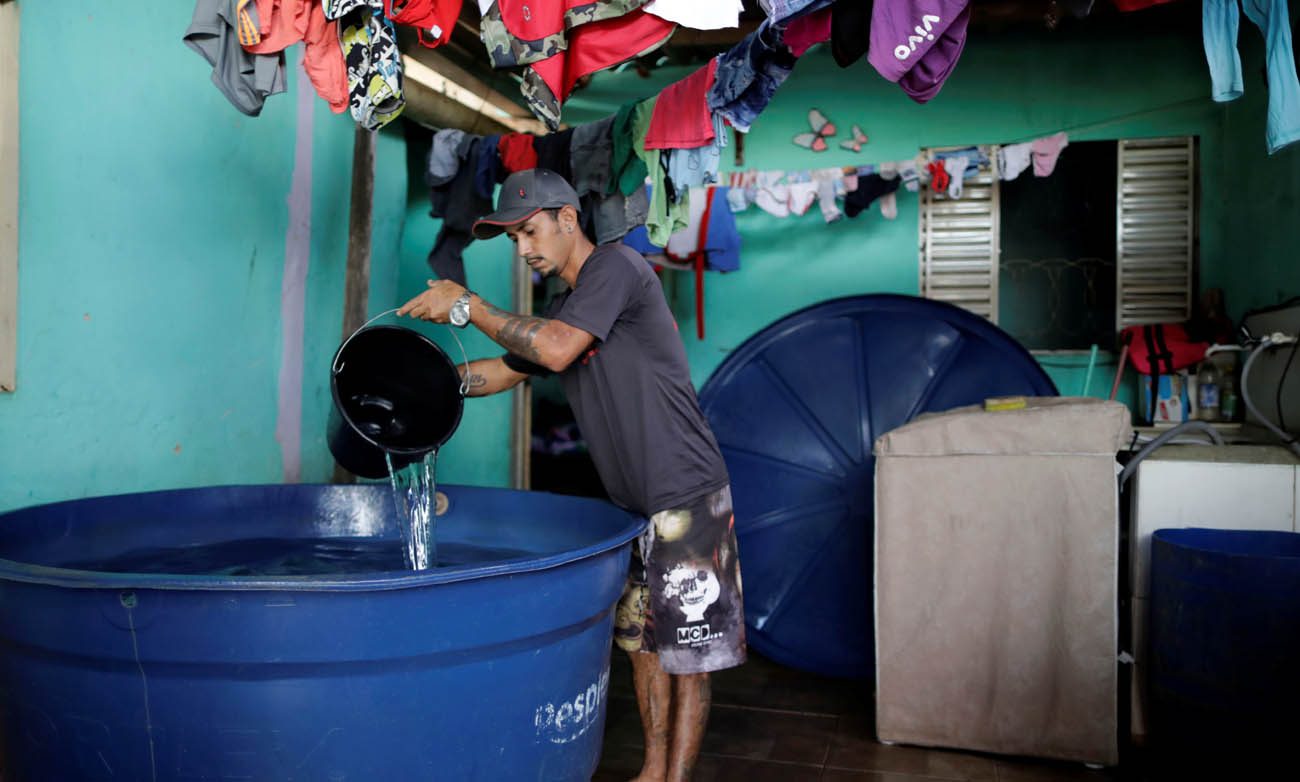 A man uses a bucket to collect water March 21 in an improvised reservoir, on the day of water rationing, in Brasilia, Brazil. (CNS photo/Ueslei Marcelino, Reuters)

BRASILIA, Brazil (CNS) — Erileid Domingues said most of her indigenous village has, at one time or another, fallen ill due to contaminated water.

Domingues said her village in the state of Mato Grosso do Sul is surrounded by large soybean and corn plantations that use agro-toxins in their crops, which eventually seep into the soil and make their way into the waterbeds, contaminating rivers and wells used by her Guarani-Kaiowa tribe.

“Our fish have become contaminated; we can’t grow a vegetable garden because the water is also bad,” she told Catholic News Service. “Days after small planes spray the plantations, water from our wells turns milky white and remains that way for several weeks. Many of us suffer from chronic stomach pains and allergies.”

To tackle the question of global access to clean water, hundreds of experts, policymakers, nongovernmental groups and members of civil society came together for two water forums held in mid-March in Brazil’s capital, Brasilia.

Access to clean water is a fundamental right must be a global priority, said Catholic leaders present at the 8th World Water Forum and the Alternative World Water Forum. Catholic representatives spoke about the need to find ways to create a sustainable supply of fresh drinking water for all, especially the poorer populations around the world.

“We have a mission,” said Msgr. Bruno-Marie Duffe, secretary of the Vatican Dicastery for Promoting Integral Human Development. “The church has the responsibility to protect human rights, to protect the poorer communities, and this also includes being able to make sure these populations have access to clean water.”

Msgr. Duffe attended the official forum. He said that, although the Holy See recognizes the enormous contributions of local communities and civil society, it is also important to listen to policymakers and politicians and to encourage them to look closely at the water issues and invest in improving sanitation and water, even in the poorest and most remote regions of the globe.

“The reality is that we have many people that live in terrible situations. There is data from 2015 that shows that over 844 million people around the world have no drinking water, and that more than 2 billion people drink contaminated water,” said the Vatican official, who has worked for many years on issues involving human rights and pastoral care.

“We have the technical capacity and technical means to treat, transport, and transform sea water into drinking water,” he told CNS. “It is not a question of not having the knowledge, it is a question of political and moral will.”

Auxiliary Bishop Leonardo Ulrich Steiner of Brasilia, secretary-general of the Brazilian bishops’ conference, spoke at the opening session of the alternative forum.

“Pope Francis believes that we need to compensate the debt we have with the environment by now taking care and cultivating land and water. We do not wish to explore, but to cultivate and take care of our lands and waters,” said Bishop Steiner, referring to “Laudato Si’.”

“This is our common home; we should take better care of it,” he added.

“Almost 100 percent of productive activities need water, so it is necessary to seek a more equitable system for distribution between the consumption by the productive sectors and consumption by human beings. Currently, there is no such equity, and the sacrifices fall mainly on the average consumer, with little restriction put on big industries,” she said during a session of the alternative forum.

Although at different forums, do Reis echoed the words of Msgr. Duffe, “It (clean available water) is not a question of lack of resources, but a political and economic option to benefit private interests.”

Caritas Internationalis, the confederation of Catholic relief, development and service organizations, called on all sectors — international organizations, affected communities, and the political and social sectors — to pull together to tackle water challenges in a “holistic and multidisciplinary approach.”

“Water scarcity conditions compound already difficult situations on social, political, ethnic and religious levels; this may lead to conflicts or forced migration, with disastrous consequences for the communities involved and neighboring states,” said the statement issued by the agency during the alternative forum.

Caritas called on each country to accept its responsibility “to guarantee access to safe, quality water for everyone, especially the most disadvantaged.”

For the Brazilian bishops’ Indigenous Missionary Council, or CIMI, the demarcation of indigenous territory by the Brazilian government would also help the water issues in the interior of the country.

“The indigenous are known for taking care of their land, their rivers and their water,” said Cleber Cesar Buzato, CIMI’s executive secretary.

Buzato said tribes such as the Guarani-Kaiowa have been waiting years for the permanent demarcation of their land. He said they are making do in temporary villages surrounded by farms or cattle ranches and are unable to protect rivers and water sources, which once their ancestors revered and shielded.