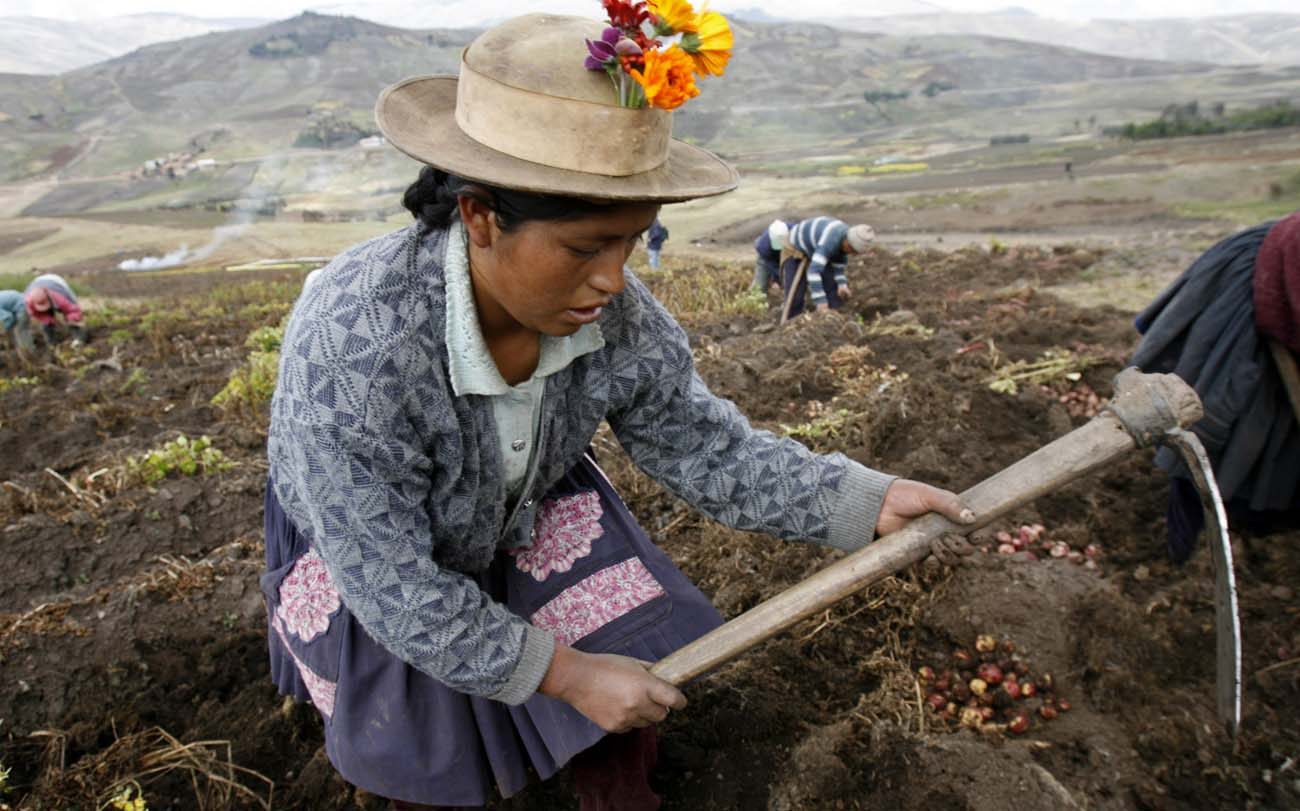 A Peruvian woman harvests native potatoes in the village of Aymara in the Andean highlands of the Huancavelica region. (CNS photo/Mariana Bazo, Reuters)

LIMA, Peru (CNS) — Less than two months after Pope Francis spoke out about environmental destruction in the Amazon basin during a visit to Peru, bishops from Latin America and the Caribbean have issued a pastoral letter calling the region’s Catholics to an “integral ecological conversion.”

The letter, published in early March, reflects on environmental issues in Latin America in light of “Laudato Si’,’ on Care for Our Common Home,” Pope Francis’ 2015 encyclical.

The Latin American bishops’ council, CELAM, spent seven years drafting the pastoral letter, which will serve as input for the commission planning the Synod of Bishops for the Amazon, to be held at the Vatican in 2019.

The letter highlights “the serious consequences of the unbridled exploitation of natural resources and awareness that we must care for our common home,” said Archbishop Pedro Barreto Jimeno of Huancayo, Peru, who oversaw much of its drafting.

The economies of many Latin American countries depend largely on exports of raw materials, especially minerals, the bishops note. Those countries experienced an economic boom over the past decade and a half because of high prices for oil, minerals and other commodities.

But while those revenues helped decrease poverty rates, the income gap in Latin America widened during those years.

Industries such as mining, oil and gas, timber production, industrial agriculture and large-scale energy projects cause “multiple impacts on the lives and health of people living near the projects, the environment and our entire region,” the bishops wrote.

They called on business executives, government officials and investors to “prioritize the lives of territories and their people over any financial interest.”

Governments must “fully assume their responsibility to protect the most vulnerable people and place the common good ahead of any private interest,” the bishops wrote.

The pastoral letter reinforces ideas expressed by Pope Francis during his encounter with indigenous people in Puerto Maldonado, a city in the Peruvian Amazon, during his January visit. The pope stressed the importance of safeguarding indigenous people’s rights to their territories and the natural resources there.

The bishops emphasized that local communities must play an active part in decisions about development projects.

People today must safeguard the land, water and climate for future generations, the bishops wrote, because “justice demands that we give them a world fit for habitation.”

On a page illustrated with a photo of Sister Dorothy Stang, a member of the Sisters of Notre Dame de Namur who was murdered in Brazil in 2005 for her defense of small farmers’ land rights, the bishops called for safeguards for “those who care for our common home.”

The bishops wrote that those people “often are threatened, abused, repressed and imprisoned for proclaiming the good news of the kingdom and denouncing the gods of power and money.”

“There are many martyrs in Latin America who have given their lives in the struggle for the defense of life,” the bishops wrote. “Their blood is the seed of freedom and hope.”

Caring for creation is the task of all, the bishops said, adding, “The important thing is to ‘begin at home.'”

Individuals can take steps to conserve energy, recycle, consume less and waste less, they wrote, while Christian communities should “live their mission of caring for the earth and for the lives of people, particularly the poor.”

NEXT: At global forums, church leaders advocate for safe water for all