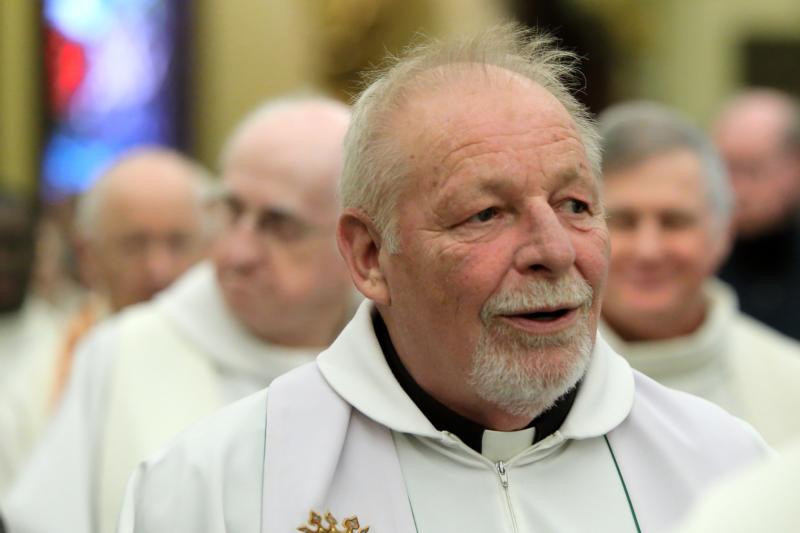 Before being a priest, Canadian Redemptorist Father Andre Morency used to own a bar. Now he is helping people overcome alcohol, drug and gambling addictions. He is pictured Feb. 5 in the Notre-Dame Basilica-Cathedral in Quebec City. (CNS photo/Philippe Vaillancourt, Presence)

QUEBEC CITY (CNS) — Redemptorist Father Andre Morency used to own a bar. But after his ordination in the early 1990s, he founded a unique shelter in Quebec City, where he has dedicated his life and ministry to offering a Catholic space for the men and women whose lives capsized because of alcohol addiction, drugs or gambling.

Father Morency knows something about regaining control of life. In his 20s, he owned a bar in Shawinigan-Sud, the city where he grew up. But in his early 30s, within one year he went bankrupt and parted ways with his fiancee.

In his office at the St. Alphonse Fraternity, the shelter he founded, volunteers and residents come and go, greeting him and seeking his advice. In his large armchair, he spoke with serenity about the darkest years of his life.

“For three months I didn’t want to see anyone. I kept my blinds shut, alone with my pride. One day, I don’t know, I got up one morning, it was sunny, and I looked outside and said, ‘No, my life doesn’t stop here.'”

He ended up becoming a Redemptorist brother in 1981, at 33. During his novitiate, he started working at Lauberiviere, a Quebec City shelter for homeless people. There, he developed “the love of the poor.” But he also realized he could go much further spiritually with alcoholics and drug addicts if he were a priest.

“If God wants you to be a priest, studies won’t get in your way,” said his superior at the time. “He gave me a list of classes. Because of my age and my schooling — I dropped out of school in grade 10 — he told me to get a certificate.” The brother got three certificates, and he could finally become a priest.

Inspired by his experience at Lauberiviere, he founded the St. Alphonse Fraternity.

“When I was chatting with the guys, they showed me that there was no place for them. No place where they could express their faith. A homeless man, sitting in a church, is still seen as a homeless man. People won’t talk to him. That’s when I started thinking about having a place where people could live their faith, and make it grow,” he said.

His youngest boarder is a 23-year-old Muslim. His oldest is 72 and has just spent 10 years in prison. Though tensions sometimes arise among the 30 boarders, Father Morency said he never had to deal with violent outbursts and, in three decades, he only had one close call.

“One night, I was sleeping and I opened my eyes. You know how you sometimes sense a presence even when you’re asleep? There was a guy above me with a hammer raised at me. ‘Hey, what are you doing here?’ It brought him back a little. He was stoned. I took his hammer, and we sat to talk,” he recalled. “The relapse doesn’t bother me. But pick yourself up the next morning!

“I always tell the guys that if they’re here, it’s because God is sending them here. Why? It’s in their relationship with him that they’ll find out. God is waiting for them here. For me, the person entering this house is Christ suffering,” he explained.

“It’s not a matter of expecting you to go church every Sunday, I tell them. It’s a question of knowing that the day you’ll want to leave the house, you’ll know you’re not alone. That you have someone in front of you. That you can hold on to him, that you can ask him for strength, to help you. Temptations will come for you. Speak to him like he’s your buddy.”

Father Morency and his team raised $1 million between the end of 2017 and the beginning of 2018, hoping it will allow them to buy the house they’ve been renting for years. Then, they’ll need $2 million dollars to renovate the building.