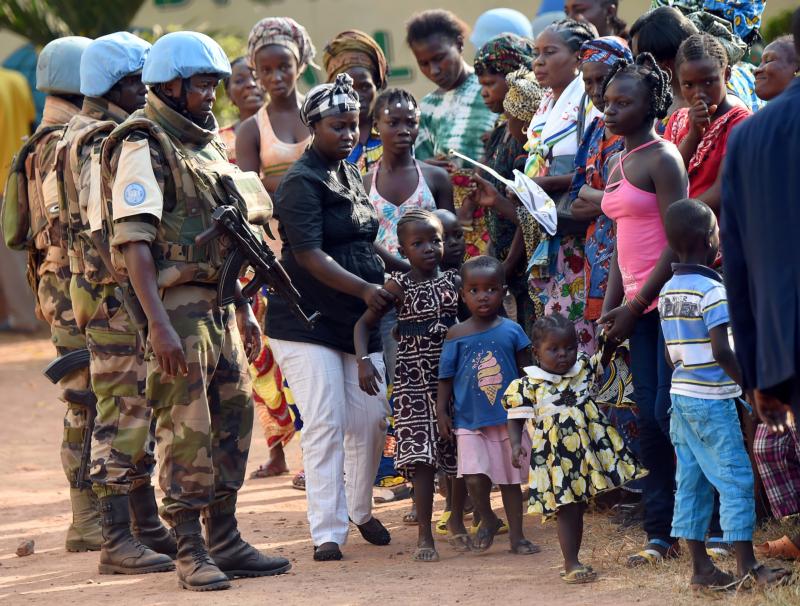 MADRID (CNS) — A Catholic bishop in the Central African Republic accused U.N. peacekeeping troops of sexual abuse in his diocese and warned they could be guilty of crimes against humanity.

“Women are selling their bodies to the Blue Helmets out of desperation,” said Bishop Juan Aguirre Munoz of Bangassou.

“Many are doing this to avoid dying of hunger, and some of the abused are minors. When I asked their mothers what happened, they sank their heads.”

The bishop spoke while staying in his native Spain on U.N. advice after his diocesan vicar general narrowly survived a machete attack.

In an interview with Madrid’s Alfa y Omega Catholic weekly, he said up to 2,000 Muslims had been sheltering in the seminary adjoining Bangassou’s Catholic cathedral, protected by peacekeepers, since a wave of anti-Muslim violence in May 2017 left dozens dead.

However, he added that poor sanitary conditions had increased the risk of cholera, while many young Muslim men had resorted to violence after “losing everything.”

“That some women, even girls, have been made pregnant by the U.N. soldiers is a crime against humanity,” said Bishop Aguirre, who has ministered in Central African Republic for 38 years and was appointed to Bangassou, on the southeastern border with Congo, in 2000.

“Countless international delegations have come and left the same day, because no one wants to stay here. Everyone has answered with silence and done nothing.”

Central African Republic, one of the world’s poorest countries, has been wracked by militia violence since the rebel group Seleka briefly seized power in 2013.

In a January appeal, the bishops’ conference said peace was hampered by a lack of cooperation between government forces and U.N.’s 13,400-strong peacekeeping mission. The bishops urged international peacekeepers to act more effectively, and condemned attacks on churches and the “manipulation of religious feeling.”

Bishop Aguirre said people of all ages had been “attacked with machetes, shot in cold blood or beheaded” during violence last May. He also said the Central African Republic’s Anti-Balaka militia has been “erroneously called Christian.”

He added that U.N. troops had surrounded the seminary with sacks of dirt “to avoid further atrocities,” but said nothing had changed since he explained the situation to the U.N. Secretary-General Antonio Guterres during his four-day CAR visit last October.

The bishop said he would return to Central African Republic March 18 and spend Holy Week at Zemio, a town 190 miles east of Bangassou currently occupied by armed Muslims.

“There are two priests there with 2,000 students, and I want to encourage them; if we support the teachers, the schools will continue, and if Muslim and non-Muslim children are together in class, their parents may avoid fighting,” Bishop Aguirre said. “How am I going to leave these people there? The Catholic Church must be the last to turn off the light.”

U.N. peacekeeping troops in the country have faced frequent accusations of sexual misconduct.

In 2015, a detachment of 630 Congolese soldiers was withdrawn from Berberati after claims it had traded bottles of lentils for sex, while 120 Congolese troops were sent home for similar offenses in 2016.

In Feb. 19 statement, MINUSCA, as the peacekeeping mission is known, said it had requested an investigation after a 14-year-old gave birth at Bambari after being abused by a Congolese soldier.

In a March 7 statement, MINUSCA said it was taking Bishop Aguirre’s “allegations of sexual abuse” seriously.

It added that a U.N. fact-finding mission at Bangassou had found “no tangible element” to support the claims, but said any proven instances of sexual abuse would by “duly sanctioned” in line with the U.N. policy of zero tolerance.

The statement said MIUSCA had set up more than 100 “contact points” around the country for people to report abuse and had installed a toll-free hotline.