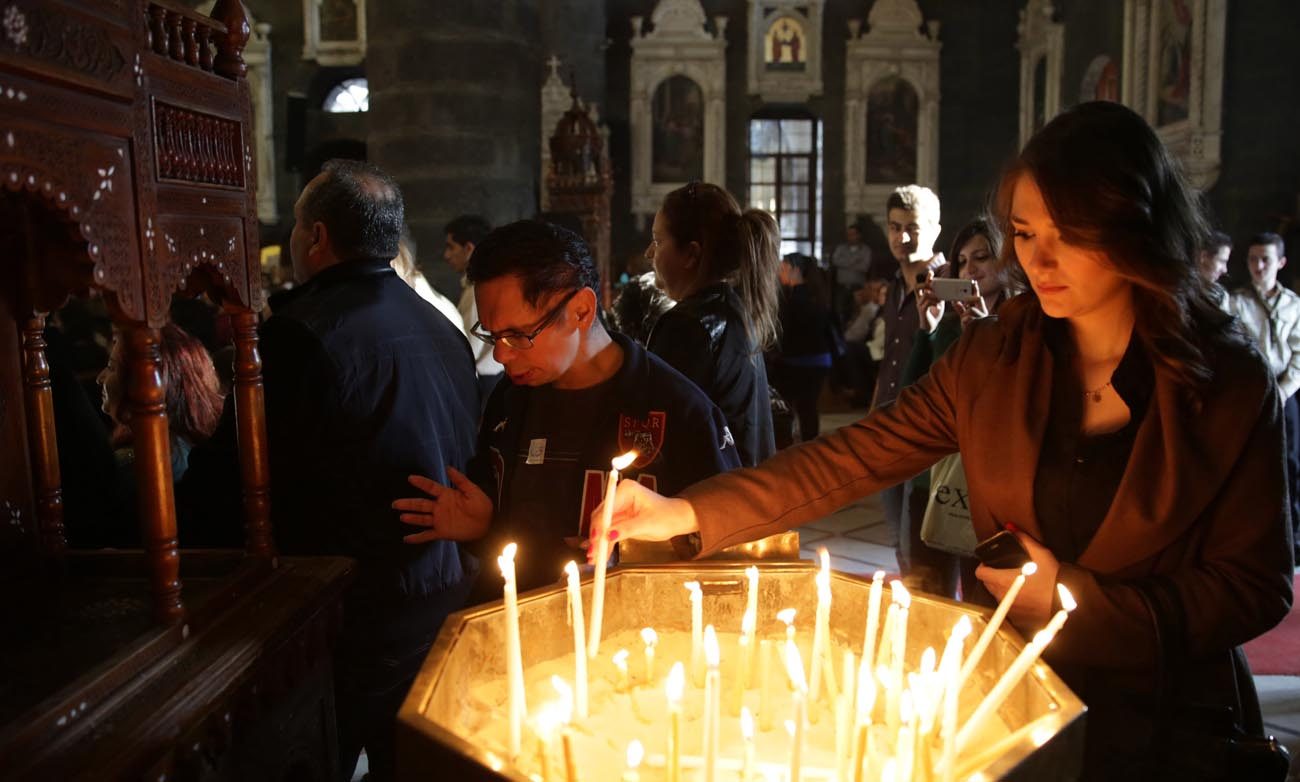 A woman lights a candle on Good Friday in 2015 in Damascus, Syria. Christians in the Middle East, particularly those who have been forced from their homes by violence and persecution, need the support of the Catholic Church, a Vatican official said. (CNS photo/Youssef Badawi, EPA)

VATICAN CITY (CNS) — Christians in the Middle East, particularly those who have been forced from their homes by violence and persecution, need the support of the Catholic Church, a Vatican official said.

“Let us show them concretely our closeness, through our constant prayer and through our monetary aid,” said Cardinal Leonardo Sandri, prefect of the Congregation for Eastern Churches.

Such support is especially key now that the Ninevah Plain in Iraq has been liberated from Islamic State and “most Iraqi Christians and Syrians want to return to their own land where their houses were destroyed, with schools, hospitals and churches devastated. Let us not leave them alone,” he said in a letter sent to bishops around the world.

The Vatican released a copy of the letter March 12.

In the letter, the cardinal urged Catholics around the world to give to the annual collection for the Holy Land on Good Friday or on the date established by their local bishops’ conference. The collection was established in 1618 by Pope Paul V to support Eastern-rite churches in communion with Rome and maintenance of holy sites under Catholic care in the Holy Land.

He wrote that the traditional collection is a way for Catholics worldwide “to be one with our brethren in the Holy Land and the Middle East.”

“Unfortunately, from those territories, the outcry of thousands of persons who are deprived of everything, at times even of their own human dignity, continues to reach us, breaking our hearts and inviting us to embrace them through Christian charity, a sure source of hope,” he wrote.

The majority of the funds go to the Franciscan Custody of the Holy Land, an administratively autonomous province of the Franciscan order that is responsible for most of the shrines connected with the life of Jesus as well as for providing pastoral care to the region’s Christians: running schools, developing low-cost housing, operating charitable institutions and training future priests and religious.

The congregation uses the remaining funds for the formation and support of seminarians, priests and religious, and to help cover educational costs for young students.

The letter said the congregation was boosting the amount it provides for education given the thousands of school-aged youth from Syria and Iraq settling in the Holy Land.

“We cannot forget the thousands of families who fled from the violence of the war in Syria and Iraq, among whom children and youth, a great number of them of schooling-age, who appeal to our generosity in order to resume their scholastic life and may dream of a better future,” it said.

“We hope against hope, that the schools serve as a place of encounter for the Christians and the Muslims, where they prepare a future of mutual respect and collaboration; the hospitals and clinics, the homes and meeting centers continue to welcome the suffering and those in need, refugees and displaced, persons of all ages and religions struck by the horror of war,” he said.

Along with Cardinal Sandri’s letter, the Vatican press office released some details of how the congregation disbursed the $7.2 million raised in 2017. Nearly $900,000 was provided in emergency assistance to religious in Syria and for extra support in Jerusalem; more than $8.3 million was used to support Catholic education at every level; and about $1.6 million went to support churches in the Jerusalem, Jordan, Iraq, Iran, Lebanon, Turkey, Egypt, Ethiopia and Eritrea.

“As can be seen, expenses exceed the collection, therefore, greater cooperation and a generous commitment is needed from Christians from all over the world,” the letter said.