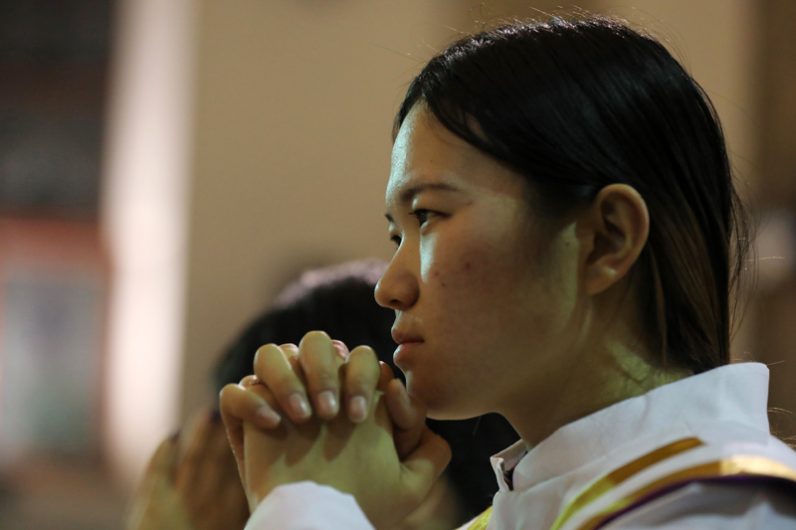 A young woman prays during a 2017 Mass at the Cathedral of the Immaculate Conception in Beijing. As rumors fly of an imminent Vatican-China deal on the appointment of bishops, a Belgian priest known as an expert on China said he thinks an agreement might really happen. (CNS photo/Wu Hong)

Ucanews.com reported the move was announced on the closing day of the annual “two meetings” in Beijing and comes as part of a comprehensive bureaucratic overhaul of the entire Chinese bureaucracy and only seven weeks after stricter new rules on religion were introduced on Feb. 1.

The official line from the state-run Xinhua News Agency ran like this:

“The CPC (Communist Party of China) exercises overall leadership over all areas of endeavor in the country, and the reform is meant to strengthen the party’s leadership in all areas and improve the structure of the party organization, according to the plan.

Feng Yue, a political science expert at the Chinese Academy of Social Sciences, said, “The core of this reform is to reinforce and strengthen the Party leadership, and adjust the political system of the Party-State management in China.”

Ucanews.com reported that while the United Front Work Department — once described by Chinese leader Xi Jinping as a “magic weapon” — previously had policy control over religion, it now has day-to-day oversight and direct control over the state-run organizations of all five official religions, including the Chinese Catholic Patriotic Association and the Chinese bishops’ conference. It exercises control over religious appointments, the selection of clergy and the interpretation of religious doctrine.

The move comes at a delicate time for the Catholic Church, which is deep in talks with Beijing about normalizing the appointment of bishops to bring together the two China church communities — the so-called underground and those whose bishops have registered with the government.

Rumors have been swirling that a deal could be announced to coincide with Holy Week, which begins March 25, but it is unclear if Vatican diplomats were made aware of China’s wholesale changes to religion management ahead of the announcement.

Or Yan Yan, a project officer at Hong Kong Diocese’s Justice and Peace Commission, described the move as “a major step backward in religious work.”

“On the mainland it used to be the ‘government managing religions,’ but now they are not afraid of going backward and directly showing the outside world its the party managing religion,” she told ucanews.com. She said the move means the Communist Party will not loosen its control over religion and ideology.

NEXT: Aborting children with Down syndrome diagnosis called genocide