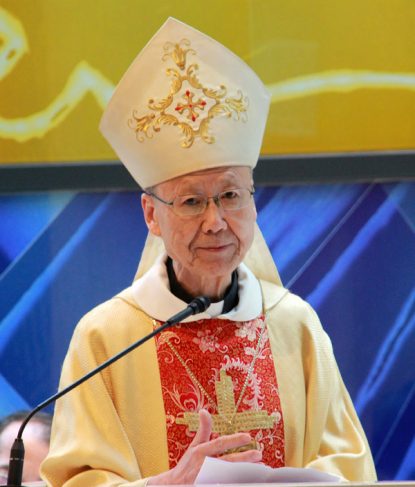 Dialogue and respectful understanding are the prerequisites for social harmony and world peace, Hong Kong Cardinal John Tong Hon told a symposium on Christianity and China. The cardinal is pictured in a 2017 photo. (CNS Photo/Francis Wong)

“If we see only our own reasons and insist on our own experience as the norm, thereby denying the basis of other people’s experience, then disagreement, quarrels and even wars will be inevitable,” between individuals, communities, nations and religions, he said.

“As a result, our zeal for pursuing the truth will, ironically, become a chasm separating us,” he said in his address March 22.

The cardinal and others spoke at a March 22-23 symposium on “Christianity in the Chinese Society: Impact, Interaction and Inculturation,” hosted by Rome’s Pontifical Gregorian University.

In his talk, Cardinal Tong said, “dialogue is an indispensable feature of our world.”

Every person and community have their own unique context, outlook on life, values and norms, he said.

“While affirming our own experience, we must acknowledge and respect the rationality of others’ experience. This is a prerequisite for social harmony and world peace,” he said.

Christianity and Chinese society are the two largest groups in the world, he said, “each with its own profound culture and historic traditions.”

“When we are willing to listen to each other and to feel how the other feels, the experience of the other party will give us a new understanding of the world, life and society,” he said.

Not only does this enrich each culture, it also contributes to peaceful co-existence, Cardinal Tong said.

“When both parties take a further step, we will find ourselves getting closer and closer to each other, and becoming friends on the path to the truth,” he said.

In his address March 22, Archbishop Paul Gallagher, Vatican foreign minister, highlighted the approach many Jesuit missionaries took when they went to Asia, and in particular, China. It entailed believing in the primacy of God’s grace already at work in human history and preceding human action, he said.

“In China too, God is already present and active in the culture and life of the Chinese people,” he said.

The seed of the Gospel has already been planted in China, and now, it is growing and producing fruit “by drawing sustenance and assuming characteristics proper to the local culture in which it was sown,” he said.

“It seems clear that the mission of the church in China today is one of being ‘fully Catholic and genuinely Chinese,’ making the Gospel of Jesus available to all and placing it at the service of the common good,” Archbishop Gallagher said.

Relations between China and the Catholic Church have alternated between “moments of fruitful cooperation” and “great misunderstanding and hostility, leading, at times, to situations in which the community of the faithful experienced great suffering,” he added.

By looking at the past, one can see the method that produced fruitful cooperation, he said, was a method of “inculturation of faith through the concrete experience of knowledge, artistic culture and friendship with the Chinese people.”

It should be possible to work out “an authentic Christian presence in China, which could present the special nature and the newness of the Gospel in a context deeply rooted in the specific identity of the age-old Chinese culture,” he said.

Archbishop Gallagher said, “the universality of the Catholic Church, with its natural openness to all peoples, can make a contribution in terms of moral and spiritual inspiration to the great effort at dialogue between China and the contemporary world, doing so precisely through the Chinese Catholic community, which is fully integrated into the historical and current dynamism of the land of Confucius.”

PREVIOUS: At pre-synod, nonbeliever is optimistic about church’s future