Christian activists warn of slaughter of Syrian civilians in Afrin 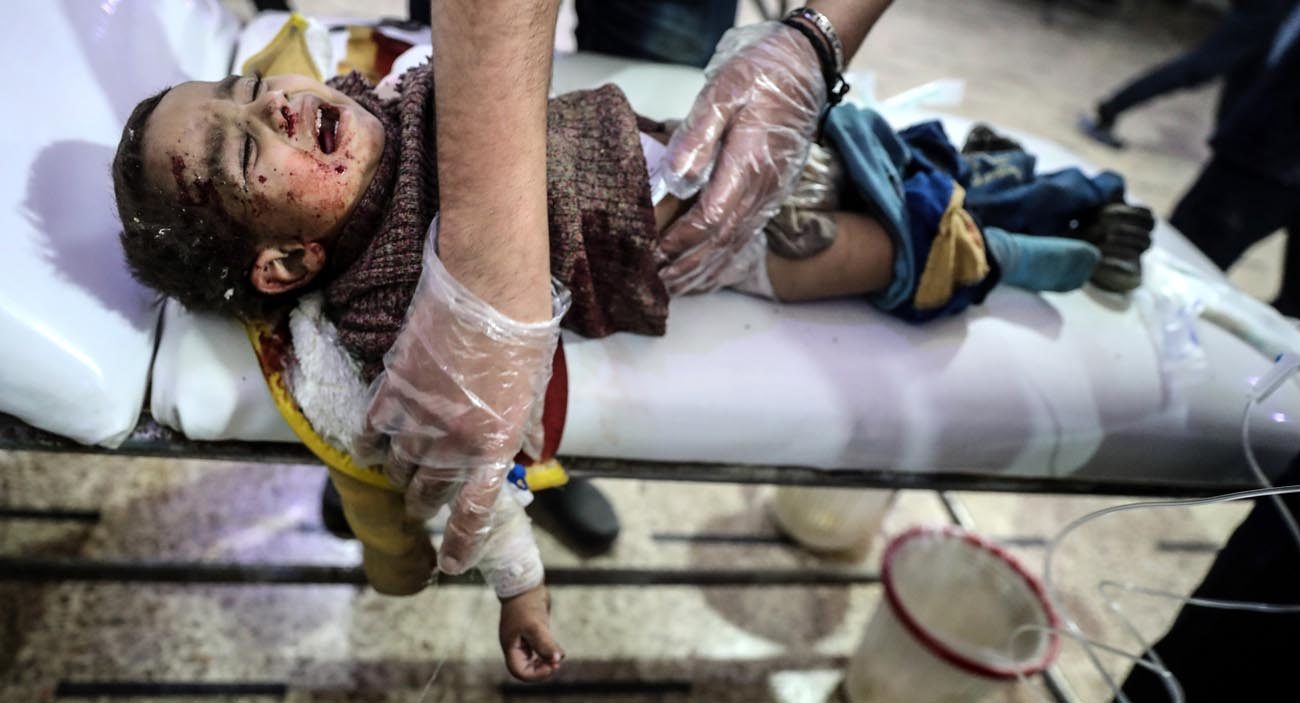 An injured child receives medical attention after a bombing March 4 in Douma, Syria. Cardinal Mario Zenari, the apostolic nuncio in Syria, said "I have never seen so much violence as in Syria." In remarks March 9, he likened the situation to the 1994 Rwandan genocide. (CNS photo/Mohammed Badra, EPA)

They have appealed to U.S. President Donald Trump and top U.S. officials to stop the bloodshed, warning that failure to act jeopardizes the hard-fought U.S.-led military campaign against Islamic State in Syria.

Civilians from other parts of Syria and outside the country have reportedly offered to stand as “human shields” between the Kurdish-backed fighters and Turkish forces set to storm Afrin.

Cardinal Mario Zenari, apostolic nuncio to Syria, said, “I have never seen so much violence as in Syria.” In remarks March 9, he likened the situation to the 1994 Rwandan genocide.

The nuncio called the situation in the war-ravaged land “hell on earth,” especially for vulnerable children.

In March, Syria’s conflict entered its eighth year. More than 350,000 people have died, 5 million are refugees and 6.3 million civilians are displaced within the country.

Syria is currently “one of the most dangerous places for children,” Cardinal Zenari said. “It’s terrible. I always say, it’s a massacre of the innocents.”

“Turkey has committed war crimes and ethnic cleansing already in Afrin and the Federation of Northern Syria,” or FNS, they told CNS.

Ishak heads the Syriac National Council and is a member of the political bureau of the Syrian Democratic Council. He is a graduate of The Catholic University of America in Washington, D.C. Homer, an Anglican, is a Washington, D.C.-based international human rights lawyer.

“Turkey has already ‘cleared’ villages of Yazidis, Kurds, Christians and others, promising to replace them with Syrian refugees. In fact, Afrin already has enlarged its population by 50 percent to house (internally displaced) Syrians, who are among those being killed, injured or captured,” they said.

People in and around Afrin are facing the warplanes, tanks, artillery and other heavy weapons of NATO’s second-largest standing army, Turkey.

A local health authority reported more than 220 dead and 600 civilians injured in this mainly Kurdish area of northwestern Syria, some 30 miles from Aleppo.

Videos and photos from Afrin taken by both Kurds and members of the Turkish forces depict bombed-out houses, mangled bodies of children killed by the blasts and civilians being herded away.

Largely untouched by Syria’s deadly conflict until recently, this part of the Federation of Northern Syria succeeded in creating a nonsectarian, pluralist, inclusive government system not seen elsewhere in the Middle East in which there is religious freedom and equal rights are granted to all.

Activists are calling for an immediate no-fly zone over Afrin, enforced by U.S. drones or warplanes; implementation of the Feb. 24 U.N. Security Council resolution requiring a cease-fire by Turkey in Afrin; humanitarian aid and safe passage out for civilians; and mediation of a long-term cease-fire and withdrawal of Turkish troops to its own borders — potentially with promises of U.S. or U.N. border monitors.

Meanwhile, the Kurdish council that governs Afrin demanded the U.N. Security Council establish a no-fly zone over Afrin and forcibly respond to the Turkish offensive.

“This U.N. and U.S. and NATO inaction will go down in infamy as an inconceivable abandonment of our ‘allies’ the SDF and the FNS. Genocide seems to be only something we are interested in in retrospect, to mourn and wring our hands over,” Homer warned.

Anti-aircraft weapons are needed to stop the attacks, observers say, but the Syrian Democratic Forces, composed of Kurdish and Christian fighters, were never given the necessary arms. At this point, U.S. aerial patrols would be needed. The Kurds and Christian fighters largely won the U.S.-led battle against Islamic State in Syria.

“Military solutions are no real solutions. Taking Afrin will not solve any problems, neither the internal problems for Turkey in the long run, nor will it help solve any issue that is part of the Syrian question,” Ishak told CNS. Turkey says it is battling Kurdish “terrorists” as its pretext for invading Afrin.

“Instead, it will just further complicate the situation and increase the level of competition between actors jockeying for influence in Syria,” Ishak said.

Meanwhile, the Syrian military, backed with Russian airpower, carried out intensive ground and aerial assaults on the rebel-held enclave of Eastern Ghouta near Damascus. Syrian government forces have reportedly captured more than half of the area.

The international medical charity Doctors Without Borders said more than 1,000 civilians have been killed in the area since late February, while almost 400,000 residents are living under heavy bombardment, after having been subjected to nearly five years of siege, lacking food and medicines.

Pope Francis has repeatedly called on the international community to intervene in Syria to help end the violence. Calling the war in Syria “inhumane,” Pope Francis urged for an end to the fighting, immediate access to humanitarian aid and the evacuation of the injured and infirm.

NEXT: Pope Francis changed the conversation, but can he change the culture?