Disgraced cardinal from Scotland dies at 80 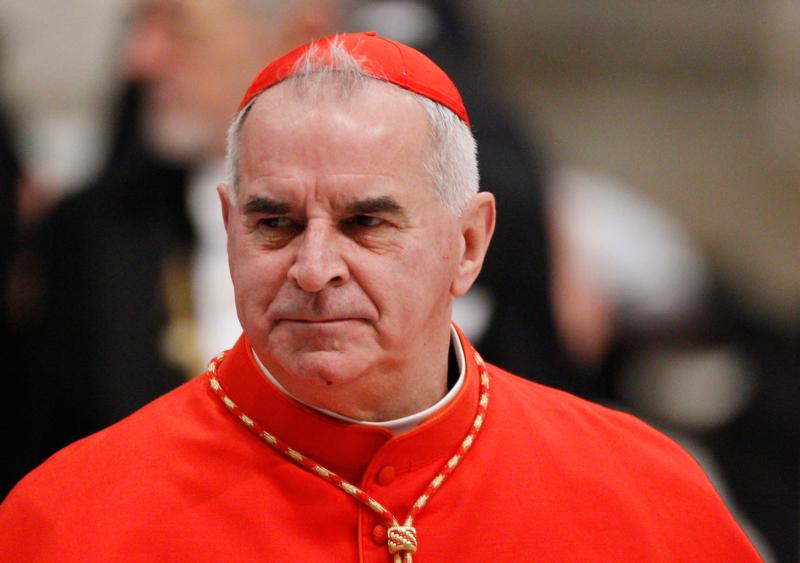 Cardinal Keith O’Brien of St. Andrews and Edinburgh, Scotland, who resigned five years ago after admitting to sexual misconduct, died early March 19 at the age of 80. He is pictured in a 2010 photo. (CNS photo/Paul Haring)

VATICAN CITY (CNS) — Scottish Cardinal Keith O’Brien, who resigned five years ago as archbishop of St. Andrews and Edinburgh after admitting to sexual misconduct, died early March 19 at the age of 80.

He had been receiving care at a hospital in Newcastle-upon-Tyne, England, after suffering injuries from a fall in February. His successor, Archbishop Leo Cushley, administered the last rites March 17 — the cardinal’s 80th birthday.

In a telegram to Archbishop Cushley, Pope Francis said he was saddened to learn of the cardinal’s death and offered his “heartfelt condolences to you, his family and all who mourn his passing.”

“Commending his soul to the merciful love of God our father, and with the assurance of my prayers for the Archdiocese of St. Andrews and Edinburgh, I cordially impart my apostolic blessing as a pledge of peace and consolation in our Lord Jesus Christ,” the pope wrote in the telegram released by the Vatican March 20.

Archbishop Cushley said in a written statement March 19, “In life, Cardinal O’Brien may have divided opinion; in death, however, I think all can be united in praying for the repose of his soul, for comfort for his grieving family and that support and solace be given to those whom he offended, hurt and let down. May he rest in peace.”

The cardinal stepped down as archbishop in February 2013, after the Observer, a British weekly newspaper, carried a story detailing complaints of three priests and one former priest who alleged Cardinal O’Brien had made sexual advances toward them more than 20 years earlier.

The cardinal initially denied the allegations but, less than a week later, he issued a public apology for his actions. He decided not to attend the 2013 conclave that elected Pope Francis and declared he was retiring from public life.

“I wish to take this opportunity to admit that there have been times that my sexual conduct has fallen below the standards expected of me as a priest, archbishop and cardinal. To those I have offended, I apologize and ask forgiveness. To the Catholic Church and people of Scotland, I also apologize. I will now spend the rest of my life in retirement. I will play no further part in the public life of the Catholic Church in Scotland,” he said in a statement in March 2013.

In April 2014, following a request from Pope Francis, the Vatican Congregation for Bishops appointed then-Auxiliary Bishop Charles Scicluna of Malta to go to Scotland to collect testimony for a formal investigation against Cardinal O’Brien.

Though the Vatican did not release a statement about the investigation or its outcome, the College of Cardinals announced in 2015, “The Holy Father has accepted the resignation of the rights and privileges of a cardinal expressed in canons 349, 353 and 356 of the Code of Canon Law, presented by his eminence Cardinal Keith Michael Patrick O’Brien, archbishop emeritus of St. Andrews and Edinburgh, after a long period of prayer.”

The Catholic Church in Scotland had welcomed news of the cardinal removing himself from the key duties associated with the office of cardinal, calling it “an unprecedented action.”

Cardinal O’Brien had been living in Northumberland County in northeast England, near the Scottish border, in a home purchased by the archdiocese; he led a strictly private life with no participation in any public, religious or civil events.

Born March 17, 1938, in Ballycastle, Northern Ireland, the cardinal’s family later moved to Scotland. He was ordained a priest in 1965 and served a parish priest and chaplain of St. Columba Secondary School in Cowdenbeath, where he taught math. He was spiritual director of St. Andrew’s College in Drygrange and rector of St. Mary’s College, Blairs.

He was ordained archbishop of St. Andrews and Edinburgh in 1985 and served as president of the Catholic Bishops’ Conference of Scotland from 2002 to 2012.

He often expressed concern about the dramatic decline in the number of clergy and, in 2001, he appealed for lay Catholics to take on more administrative tasks within the church to ease the burden on overworked priests.

He was an outspoken supporter of the church and human rights in Latin America, particularly the plight of indigenous people.

Once, speaking at the Church of Scotland’s general assembly, he told of his frustration at not being able to share Communion with other churches and expressed hope that closer cooperation between the churches would progress more quickly.

Before leaving for Rome to be inducted into the College of Cardinals by St. John Paul II in 2003, the cardinal made a public profession of faith and affirmed his adherence to church teaching on celibacy, homosexuality and birth control.

The profession came about a week after the then-cardinal-designate had made remarks to reporters indicating he was open to discussion and change on church disciplines regarding celibacy for Latin-rite priests, homosexuality and the use of contraceptives.

The cardinal-designate said, “There is a clear distinction between things that confront us in the church at the present time, which we can say are God’s law, like murder, abortion. We can’t compromise on matters like that.

“Other matters of church law — and celibacy by priests is one of those sorts of things — can be discussed,” he said.

He also had said the presence of homosexuals in the priesthood is not a problem “if they are leading a celibate life.”

The entire church, he said, needs “to have a full and open discussion about these issues to see where we stand and what the need is and what the implications are.”

In a 2002 interview, he said that while priestly celibacy is a gift to the church he would have “no problem with celibacy withering away,” and at the 1999 Synod of Bishops he said the Roman Curia “lobby” had effectively blocked discussion about a married clergy.

His death leaves the College of Cardinals with 214 members, including 117 cardinals who are under the age of 80 and eligible to vote in a conclave to elect a new pope.

NEXT: Pope to celebrate Holy Thursday Mass in Rome prison