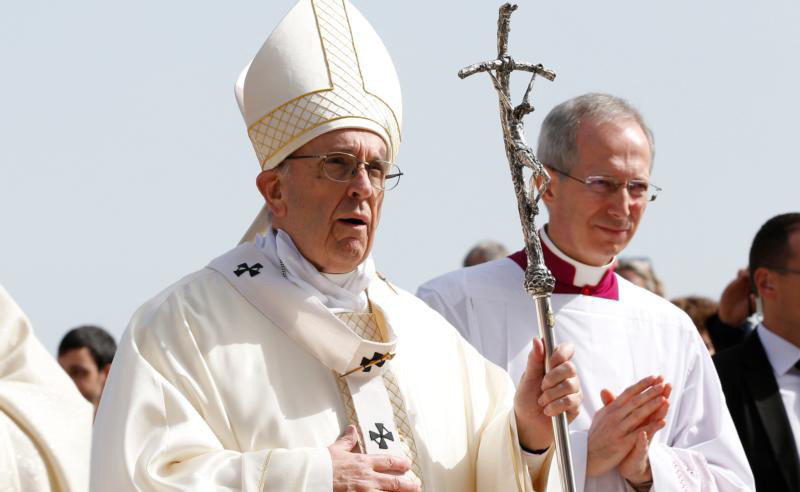 VATICAN CITY (CNS) — In just five years as leader of the universal church, Pope Francis has made 22 international trips, traveling 154,906 miles — the equivalent of six times around the world.

He also has declared 880 new saints, which includes the martyrdom of an estimated 800 Italian laymen killed by Ottoman soldiers in the 15th century.

Those numbers and more were released by the Vatican, detailing the many papal events, documents, travels and accomplishments the past five years. The numbers, released March 17, cover the period from March 19, 2013 — the solemnity of St. Joseph, the day officially inaugurating the start of his pontificate — to March 19, 2018.

According to the Vatican statistics, the 81-year-old pope has:

— Led 219 general audiences, with catechetical series that include reflections on the sacraments, the church, the family, mercy and the Mass.

— Issued 41 major documents, including the encyclicals “Lumen fidei” and “Laudato Si'” and the apostolic exhortations, “Evangelii Gaudium” and “Amoris Laetitia.”

— Prayed the Angelus and “Regina Coeli” with visitors 286 times.

— Completed 22 trips abroad, 18 pastoral visits within Italy and 16 visits to parishes in Rome — the diocese of the pope as bishop of Rome.

— Made nine other visits to churches for special events and places of worship in Rome, including the city’s synagogue and Rome’s German Evangelical Lutheran Church, Anglican church and the Ukrainian Catholic Basilica of Santa Sophia.

— Called four synods of bishops: two on the family, this year’s synod on young people and a synod on the Amazon in 2019.

— Declared two special years: on consecrated life and the extraordinary Year of Mercy.

— Established or proclaimed seven special days, including World Day of the Poor, 24 Hours for the Lord and a day of prayer and fasting for peace in Syria, South Sudan and Congo.

NEXT: Disgraced cardinal from Scotland dies at 80