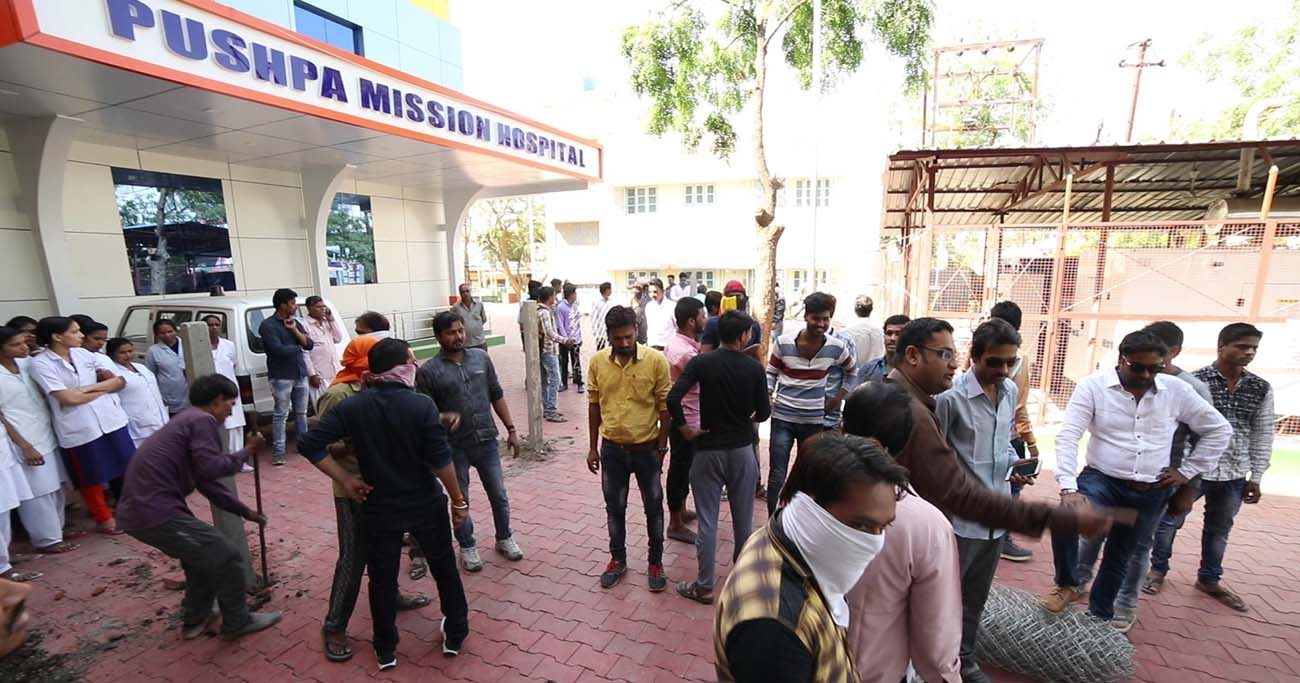 BHOPAL, India (CNS) — Suspected Hindu extremists demolished the wall of a Catholic mission hospital and manhandled staff, including nuns, in the latest incident in Madhya Pradesh state, considered a hotbed of anti-Christian violence in central India.

Ucanews.com reported some 60 people, with the help of a bulldozer, razed the boundary wall of 44-year-old Pushpa Mission Hospital in the temple town of Ujjain March 12. They blocked its emergency entrance and destroyed equipment, including power generators.

The hospital has been facing trouble since January after Gagan Singh, the personal assistant of a local legislator, staked a claim over disputed land, said Father Anthony Pulickamandapam, hospital director.

He told ucanews.com that the land in front of the hospital was given to the hospital by the local civic body for use as a parking area and to maintain its greenery.

The dispute has gone to court after members of the Bharatiya Janata Party, the pro-Hindu party that runs the state government, attempted to take over the land Jan. 27, accusing the church of illegally occupying the site.

On Feb. 2, hospital authorities obtained a stay order from the Madhya Pradesh High Court to maintain the status quo until a further hearing. But the court transferred the case to a lower court for a police investigation and hearing.

On March 8, the lower court said that, as the case and investigation were proceeding peacefully, there was no need for a stay order, Bishop Sebastian Vadakel of Ujjain told ucanews.com.

Father Pulickamandapam said the attackers came armed with a bulldozer and sharp-edged weapons. They demolished the boundary wall, erected a fence and put up some makeshift shops to claim the land.

“Our staff, including Catholic nuns, who attempted to resist the advance were manhandled and forced to flee for safety,” he told ucanews.com. “They also destroyed the backup power generator and disconnected the water supply, putting the lives of nearly 200 patients — including 12 in the intensive care unit — in serious danger.”

Bishop Vadakel said hospital staff were surprised by police inaction. The local police station and other senior officials refused to respond to calls for help.

“Even our staff nurses, who approached the women’s police station to lodge a complaint, were turned away,” he said.

A Catholic delegation led by Bishop Vadakel met Gov. Anandiben Patel, who was visiting the town, and sought protection for Christians and their properties.

Bishop Vadakel said he believes the attack was an attempt to intimidate poor people to keep them away from Christians and their institutions, ucanews.com reported.

Archbishop Leo Cornelio of Bhopal said the attack was part of “a systematic plan to bring disturbance and violence among a peace-loving community.” He wanted the state government to arrest the culprits immediately.

The BJP, which has ruled the state for 15 years after winning three successive elections, will seek another term in the state election due at the end of this year.

Church officials say Hindu groups present themselves as protectors of Hindu rights to garner Hindu votes, and an easy way to that end is to attack Christians, who constitute less than 1 percent of the 73 million people in the state.

Madhya Pradesh had the greatest number of anti-Christian incidents in India last year, according to a report by Persecution Relief, an ecumenical forum that records Christian persecution in India. The state witnessed 52 attacks against Christians in 2017, up from 28 in 2016, the report said.

Attacks have increased since the BJP came to power in New Delhi in 2014. There were 736 reported attacks against Christians in 2017, up from 348 in 2016, said Persecution Relief.

In Ranchi, Cardinal Telesphore Toppo told Catholic News Service, “What happened in Ujjain shows how the BJP is treating the religious minorities.”

“Police and government officials are told to keep quiet and not to intervene when BJP cadres do what they want. Similar shocking incidents are happening in parts of the country,” said Cardinal Toppo, former president of Catholic Bishops’ Conference of India.

Contributing to this story was Anto Akkara in Ranchi, India.