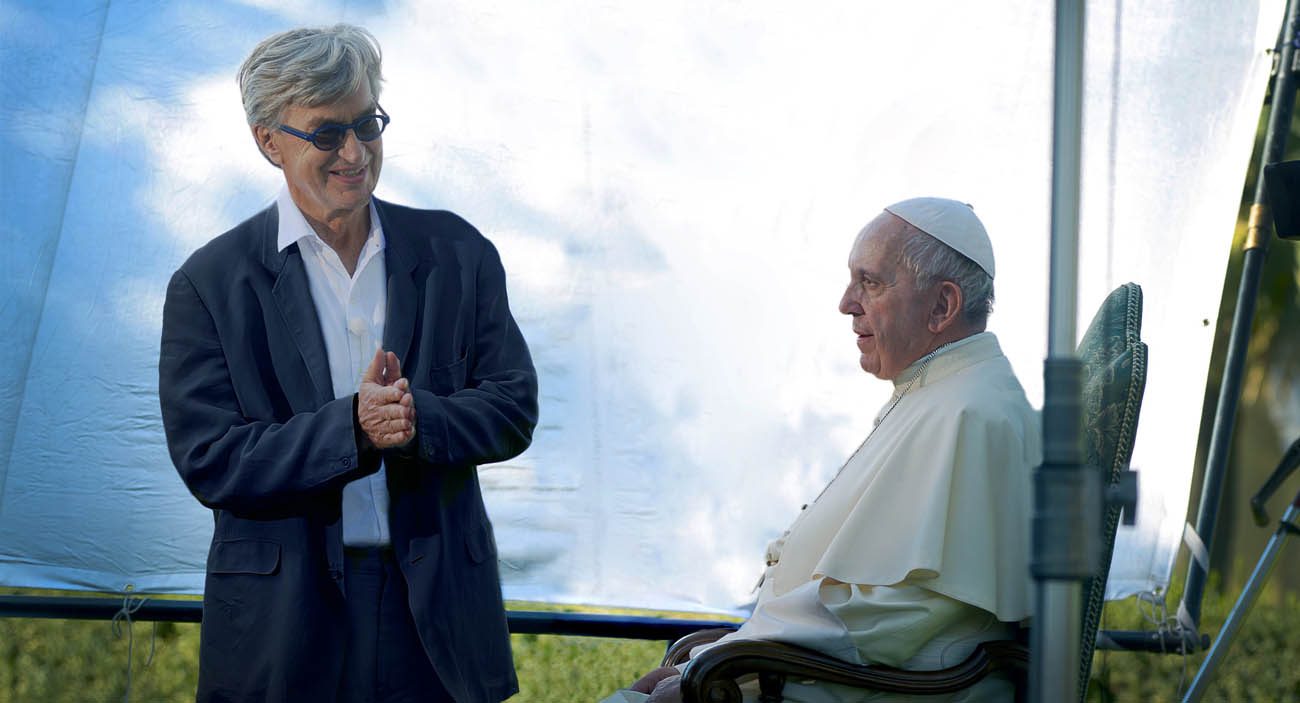 German filmmaker Wim Wenders is pictured in this undated photo with Pope Francis during the production of his documentary film, "Pope Francis -- A Man of His Word." The film was compiled from four long sit-down sessions with the pope and from clips of the pope at the Vatican and abroad. It is scheduled for release in theaters May 18. (CNS photo/Vatican Media, handout)

VATICAN CITY (CNS) — After two years working on a documentary about Pope Francis, the noted German filmmaker Wim Wenders said he is most struck by the pope’s courage.

“Meeting him eye to eye, and then also seeing and hearing him every day in the editing room, not only in our own interviews, but also his many talks all over the world to refugees, prisoners, politicians, scientists, children, rich or poor or regular people made me realize how courageous he was, how fearless,” the director told Vatican News March 13.

Wenders’ film, “Pope Francis — A Man of His Word,” is scheduled for release in theaters May 18.

“Not in my wildest dreams would I have expected to make a film about Pope Francis,” Wenders told Vatican News. When Msgr. Dario Vigano, prefect of the Secretariat for Communication, invited him to the Vatican to discuss the project, “I first took a deep breath, and then I walked around the block,” he said. “It seemed that such a project would represent a huge responsibility, at least it would be a whole different kind of task than any film I had made before.”

Wenders is no stranger to documentary films. His 1999 “Buena Vista Social Club” about the Cuban music scene won multiple awards.

For the film with Pope Francis, he said, he had four long sit-down sessions with the pope and plied him with questions of his own as well as queries submitted from around the globe. The film includes exclusive footage shot for the documentary as well as clips of the pope speaking at the Vatican and abroad.

After two years of work, Wenders said, the film “fulfilled the high hopes I had for it: that it would allow Pope Francis to speak directly to every viewer and listener, almost face to face, about all his concerns and all the issues that matter to him. This wasn’t meant to be a film about him, but with him.”

“I was very impressed at how open Pope Francis was to each question, and how directly and spontaneously he answered,” the director said. “And after each of our four long sessions, he took time to shake everybody’s hands and did not make any difference between producer or director or electrician or assistant.”

Wenders said Pope Francis is something “rare and precious” today: “a man who is not acting for himself, but for the common good.”

NEXT: Despite new law, some Irish pubs will remain closed on Good Friday