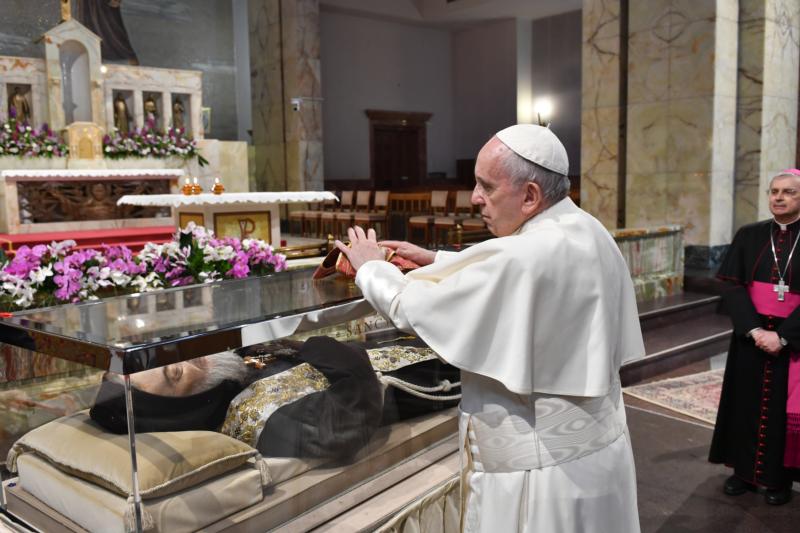 SAN GIOVANNI ROTONDO, Italy (CNS) — Many people admire St. Padre Pio, but too few imitate him, especially in his care for the weak, the sick and those who modern culture treats as disposable, Pope Francis said during Mass at Padre Pio’s shrine.

“Many are ready to ‘like’ the page of the great saints, but who does what they do?” the pope asked March 17. “The Christian life is not an ‘I like,’ but an ‘I give myself.'”

Pope Francis celebrated the Mass outside the Shrine of St. Pio of Pietrelcina with about 30,000 people after visiting children in the cancer ward of the hospital St. Pio founded, Casa Sollievo della Sofferenza (House for the Relief of Suffering).

In his homily, the pope reflected on three words that both summarized the day’s readings and, he said, the life of Padre Pio: prayer, smallness and wisdom.

Smallness, he said, calls to mind those whose hearts who are humble, poor and needy like the young patients cared for in Padre Pio’s hospital and those who in today’s world are unwanted and discarded.

Departing from his prepared text, Pope Francis said he remembers being taught in school about the Spartans, who, “when a boy or girl was born with malformations, they would take them to the top of the mountain and throw them over.”

“We children would say, ‘How cruel,'” the pope said. But, “brothers and sisters, we do the same. With more cruelty and more knowledge. Whatever isn’t useful, whatever doesn’t produce, is thrown away. This is the throwaway culture. The little ones are not wanted today.”

“Those who take care of children are on the side of God and defeat the throwaway culture, which, on the contrary, prefers the powerful and considers the poor useless,” he said. “Those who prefer the little ones proclaim a prophecy of life against the prophets of death of every age.” 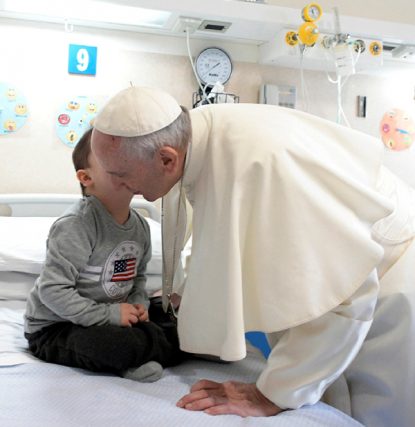 Pope Francis receives a kiss on the cheek from a patient as he visits children in the cancer ward of the hospital St. Pio founded, Casa Sollievo della Sofferenza (House for the Relief of Suffering) March 17 in San Giovanni Rotondo, Italy. (CNS photo/Vatican Media)

Only with wisdom, motivated by love and charity for others, can true strength be found, he said. Christians aren’t called simply to admire great saints like Padre Pio, but rather to imitate their way of fighting evil wisely “with humility, with obedience, with the cross, offering pain for love.”

Prayer, he said, is “a gesture of love” that is often stifled by excuses and leads to Christians forgetting that without God “we can do nothing.”

“We must ask ourselves: do our prayers resemble that of Jesus or are they reduced to occasional emergency calls? Or do we use them as tranquilizers to be taken in regular doses to relieve stress?” the pope asked.

Pope Francis began his day of tribute to St. Pio with an early morning visit to Pietrelcina, where the Capuchin saint was born in 1887.

Thousands waited outside the square of the Chapel of the Stigmata which houses a piece of the elm tree Padre Pio sat in front of when he first received the stigmata — wounds on his feet, hands and side corresponding to those Jesus suffered at the crucifixion — in September 1918.

Pope Francis entered the chapel where he prayed privately for several minutes before making his way to the square to greet the faithful.

Standing in front of an iconic image of a young Padre Pio bearing the wounds of Christ’s crucifixion in his hands, the pope said that it was in Pietrelcina that the future saint “strengthened his own humanity, where he learned to pray and recognize in the poor the flesh of Christ.”

Recalling the time in Padre Pio’s life when he returned to Pietrelcina while he was ill, the pope said the saintly Capuchin “felt he was assailed by the devil” and feared falling into sin.

Departing from his prepared remarks, the pope asked the people if they believed the devil existed. When only a handful of people responded, he told them it didn’t seem “they were totally convinced.”

“I’m going to have to tell the bishop to give some catechesis,” he said jokingly. “Does the devil exist or not?”

Christians, he continued, should follow the example of the Capuchin saint who did not fall into despair but instead found refuge in prayer and put his trust in Christ.

“All of theology is contained here! If you have a problem, if you are sad, if you are sick, abandon yourself in Jesus’ arms,” the pope said. 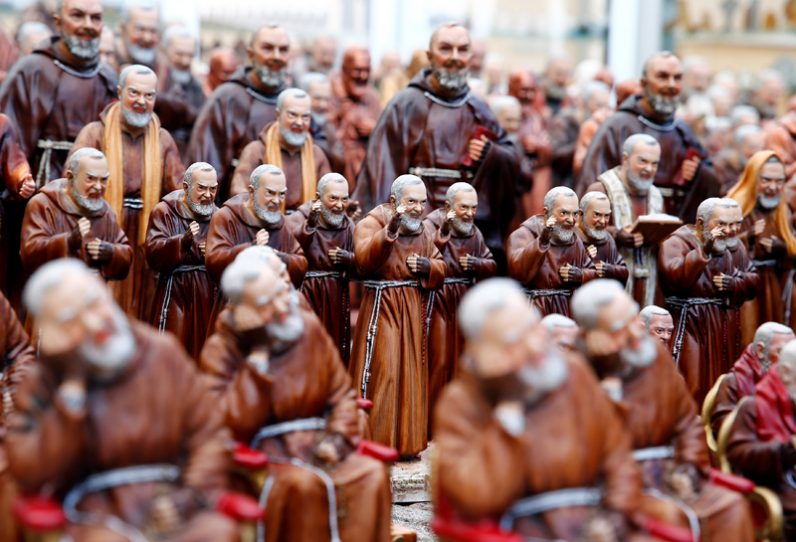