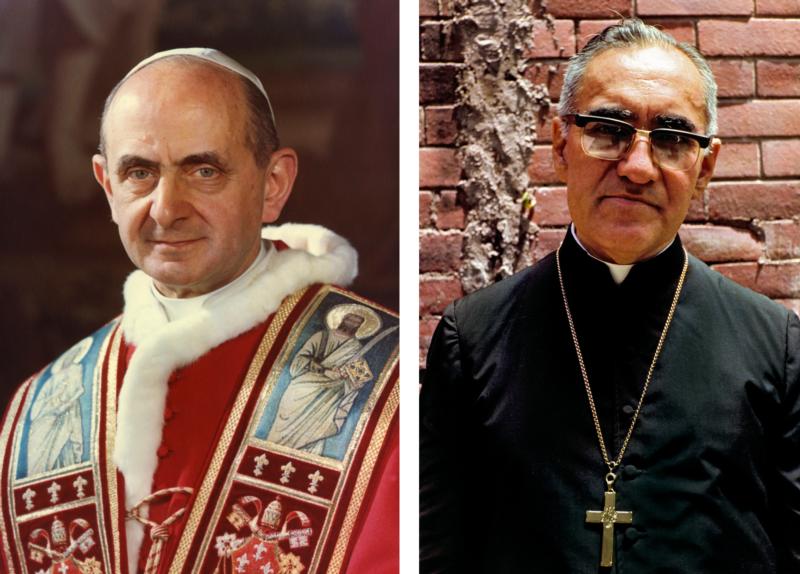 Pope Francis has cleared the way for the canonizations of Blesseds Paul VI and Oscar Romero. They are pictured in undated combination photos. (CNS photos/files/Octavio Duran)

VATICAN CITY (CNS) — Pope Francis has cleared the way for the canonizations of Blesseds Paul VI and Oscar Romero.

At a meeting March 6 with Cardinal Angelo Amato, prefect of the Congregation for Saints’ Causes, Pope Francis signed decrees for the causes of 13 men and women — among them a pope, an archbishop, two young laywomen and a number of priests and nuns.

He recognized a miracle attributed to Blessed Paul, who, according Cardinal Pietro Parolin, Vatican secretary of state, will be declared a saint in late October at the end of the Synod of Bishops on youth and discernment. Blessed Paul, who was born Giovanni Battista Montini, was pope from 1963 to 1978.

Pope Francis also formally signed the decree recognizing the miracle needed to advance the sainthood cause of Archbishop Romero of San Salvador, martyr.

El Salvador’s ambassador to the Holy See, Manuel Roberto Lopez, told Catholic News Service March 7 that the news of the pope’s approval “took us by surprise.”

“They told us before that the process was going well and that all we needed was the approval of the miracle, and it turns out the pope approved it yesterday,” he said.

Lopez told CNS that he was happy that Blessed Oscar Romero’s canonization was imminent and that his holiness was recognized alongside one of his earliest supporters.

“To see that he will be canonized along with (Blessed) Paul VI, who was a great friend of Archbishop Romero and supported his work, is a great blessing,” Lopez said.

The Vatican did not announce a date for Blessed Romero’s canonization.

The pope also recognized the miracles needed for the canonization of: Father Francesco Spinelli of Italy, founder of the Sisters Adorers of the Blessed Sacrament; Father Vincenzo Romano of Italy; and Mother Maria Katharina Kasper, founder of the religious congregation, the Poor Handmaids of Jesus Christ.

He recognized the miracle needed for the beatification of Maria Felicia Guggiari Echeverria, a Discalced Carmelite from Paraguay whom Pope Francis has upheld as a model for the youth of Paraguay. Affectionately called, “Chiquitunga,” she died from an unexpected illness in 1959 at the age of 34 before she could make her final vows.

The pope also recognized the martyrdom of a 16-year-old laywoman from Slovakia. Anna Kolesarova, who lived from 1928 to 1944 in the eastern town of Pavlovce, was murdered during Slovakia’s occupation by the Soviet army in World War II after refusing sexual favors to a Russian soldier.

In causes just beginning their way toward sainthood, the pope signed decrees recognizing the heroic virtues of Polish Redemptorist Father Bernard Lubienski, who entered the congregation in England and then returned to Poland to re-found the Redemptorists there in the 20th century, and Sandra Sabattini, a young Italian lay woman who was active in helping the poor with the Pope John XXIII Community. She was hit by a car and died in 1984 at the age of 22.

The pope also recognized the heroic virtues of Antonio Pietro Cortinovis of the Order of Friars Minor Capuchin (1885-1984) and three Italian women — two who founded religious orders and a laywoman who founded a lay fraternity.

Junno Arocho Esteves in Rome also contributed to this story.

NEXT: Do not pay for Mass, redemption is free, pope says