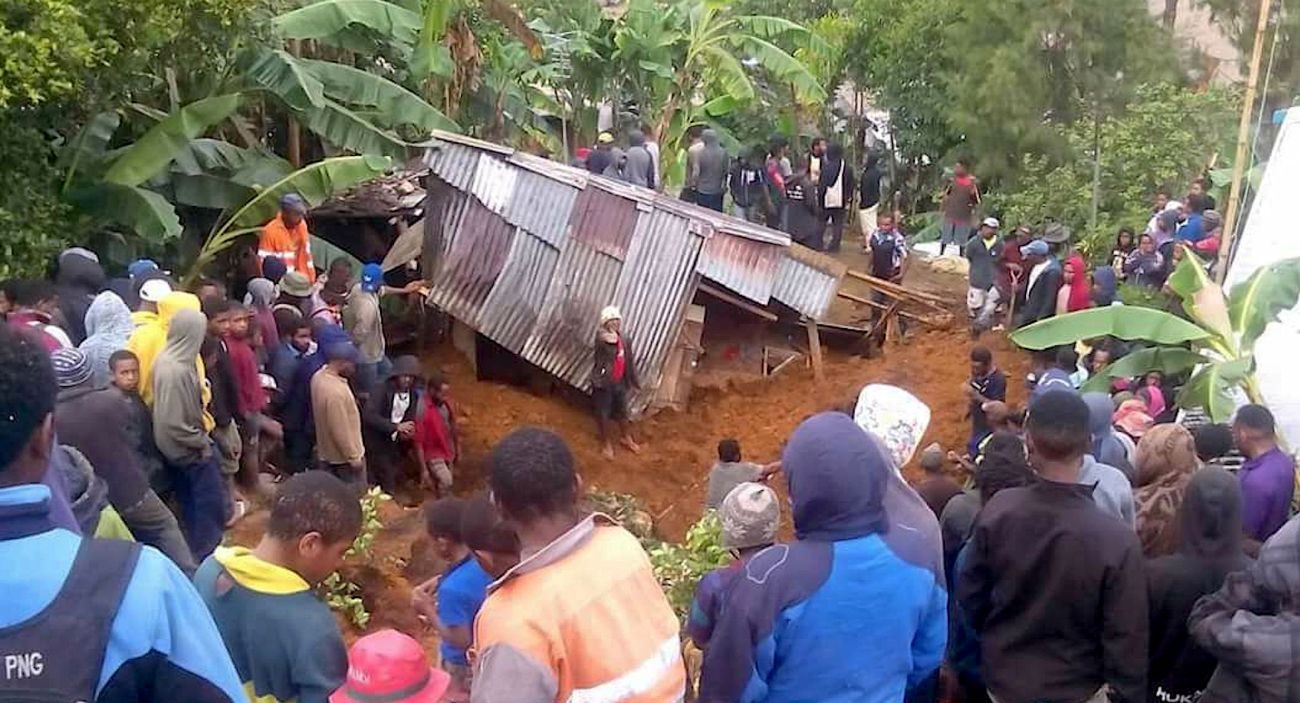 People in Mendi, Papua New Guinea, surround a house Feb. 27 that was covered by a landslide caused by a magnitude 7.5 earthquake the previous day. (CNS photo/Francis Ambrose via Reuters)

VATICAN CITY (CNS) — Pope Francis sent prayers and condolences to the families of victims of a Feb. 26 earthquake in Papua New Guinea.

A telegram signed by Cardinal Pietro Parolin, Vatican secretary of state, said Pope Francis “assures all those affected by this disaster of his closeness in prayer.” In the telegram, released March 6, the pope also prayed for strength and consolation for those who mourned and for emergency personnel.

The Associated Press reported the magnitude 7.5 quake severed communications and blocked roads in the country’s central region, hindering assessment of the scale of the destruction. The Red Cross reported March 5 that the death toll had risen to 67, and 500 were injured. However, officials said it was hard to get accurate figures because they could not reach all affected areas.

Bishop Donald Lippert of Mendi, Papua New Guinea, wrote on the diocesan website that travel was not only hampered by landslides, but by people erecting roadblocks and demanding money from those wishing to pass.

“Sadly, dozens of our people lost their lives, mainly caused by landslides. Four young girls were crushed by a falling wall as they slept in their home in Mendi town. Also in Mendi, a young couple and their first-born child … were killed by a landslide,” wrote the bishop, a native of Pittsburgh.

“Many more died here and in Hela. Please pray for all those who lost their lives,” he wrote, noting that he was feeling aftershocks as he wrote.

The bishop reported that the farther west a person traveled, the worse the damage was. As of March 4, he still was not able to reach some parishes in the diocese.

“As we enter into the daunting task of rebuilding, I realize that we could really use the services of a structural engineer, perhaps working with an architect who could inspect some of the above-mentioned buildings and determine their structural integrity and then propose needed remedial measures (as well as costings). I don’t know if there would be funding available for this very crucial service,” he wrote.