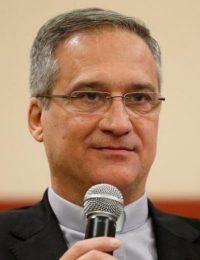 Msgr. Dario Vigano, then-prefect of the Vatican Secretariat for Communication, is pictured at a news conference at the Vatican in this Feb. 8 file photo. (CNS photo/Paul Haring)

VATICAN CITY (CNS) — After a very public controversy involving the use of a letter by retired Pope Benedict XVI, Pope Francis has accepted the resignation of Msgr. Dario Vigano as prefect of the Vatican Secretariat for Communication.

However, Pope Francis asked Msgr. Vigano, 55, to remain at the secretariat as “assessor” to “make your human and professional contribution” in assisting whoever is named the new prefect as the Vatican continues its long and complicated work of unifying its communications efforts and various media outlets.

The controversy began March 12 at the presentation of an 11-volume series of books, “The Theology of Pope Francis.” Msgr. Vigano had asked the retired pope for a theological reflection on the series.

At the book presentation, Msgr. Vigano read selected sentences from Pope Benedict’s letter declining to write the reflection. The Secretariat for Communications also published a photograph showing the first page of the letter, with several lines purposefully blurred, and the second page, except for the signature, covered by a book.

An uproar ensued over the intentional blurring of the photograph and questions were raised in the media about what exactly the letter said. In the end, the Vatican released the full text March 17. It showed that not only had Pope Benedict said he was unable to read the full series, but that he objected to one of the authors chosen to write one of the volumes.

In his letter of resignation, Msgr. Vigano told Pope Francis that although it was not intentional, his actions had “destabilized the complex and great work of reform” with which the pope had entrusted him.

“I think that for me stepping aside would be a fruitful occasion for renewal,” the monsignor wrote.

Pope Francis had named Msgr. Vigano prefect of the secretariat when it was created in June 2015. The monsignor had been director of the Vatican Television Center. The new secretariat was charged with unifying into one the offices and tasks previously handled by nine entities: the Pontifical Council for Social Communications; the Vatican press office; the Vatican internet office; Vatican Radio; the Vatican television production studio, CTV; the Vatican newspaper, L’Osservatore Romano; the Vatican printing press; the Vatican photograph service; and the Vatican publishing house, Libreria Editrice Vaticana.

NEXT: Pre-synod meeting is a chance to change the world, youths say