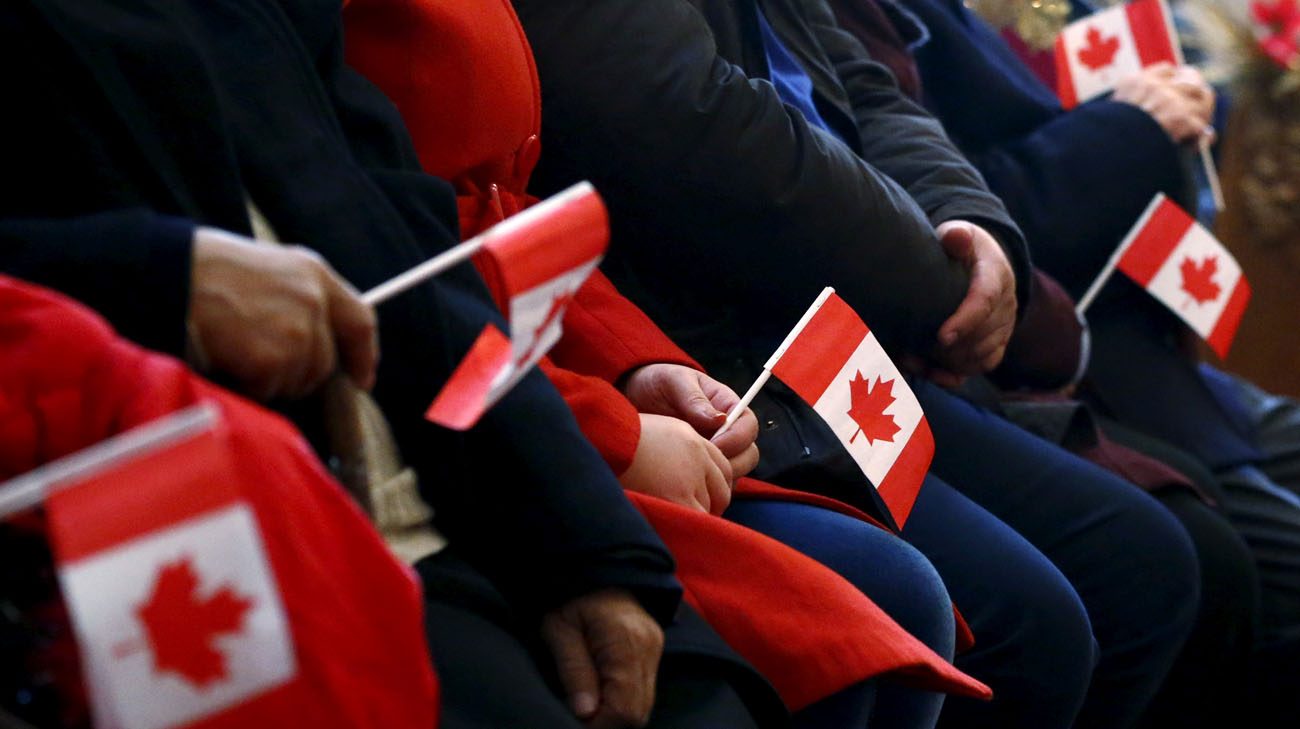 Syrian refugees hold Canadian flags as they take part in a welcome service in 2015 at a church in Toronto. The Catholic Church and Catholic agencies that work with migrants and refugees around the world are called to educate, advocate and seek alternative host countries in the face of a growing "refusal to welcome" newcomers, said a top Vatican official. (CNS photo/Mark Blinch, Reuters)

VATICAN CITY (CNS) — Liberating the poor, the oppressed and the persecuted is an integral part of what God wants his church to do, Pope Francis said.

“In order to set free those who today are oppressed, rejected and enslaved,” Catholics must promote dialogue with government leaders, “a dialogue that takes into account people’s actual experiences, sufferings and aspirations, in order to remind everyone once more of his or her responsibilities,” he told Catholic leaders working on refugee and migration issues.

That dialogue is key to help develop “much-needed new ways for the international community to respond with foresight to these phenomena typical our time,” he said March 8.

The pope’s comments came in his address to participants in the plenary council of the International Catholic Migration Commission, which was meeting in Rome.

Pope Francis praised the commission’s work over the past 67 years, noting how it also offers expert assistance to bishops’ conferences and dioceses to respond to local and national challenges.

“It is my hope that this work will continue to inspire local churches to do all they can for persons forced to leave their home countries and who, all too often, become victims of dishonesty, violence and abuse of every sort,” he said.

“Today, as in the past, liberating the poor, the oppressed and the persecuted is an integral part of the mission entrusted by God to the church,” he said, and everything the church does to offer pastoral care to “our migrant and refugee brothers and sisters” bears important witness to the whole world.

“Together, we must encourage countries to coordinate more suitable and effective responses to the challenges posed by issues of migration; and we can do this on the basis of the essential principles of the church’s social teaching,” he added.

Opening the plenary assembly of the International Catholic Migration Commission March 6 in Rome, Cardinal Pietro Parolin, Pope Francis’ top collaborator, said the Catholic Church and Catholic agencies that work with migrants and refugees around the world are called to educate, advocate and seek alternative host countries in the face of a growing “refusal to welcome” newcomers.

He decried how “the most economically advanced” nations, especially those who “undeniably owe a great deal of their development to migrants,” are now trying to close their borders.

At a time when migrants and refugees are fleeing increasingly “terrible experiences” and encountering violence and abuse on their journeys, Catholics feel a particular responsibility to welcome the stranger, he said.

Pope Francis, he said, encourages Catholics to move away from “attitudes of defensiveness and fear, indifference and marginalization — all typical of a throwaway culture — toward attitudes based on a culture of encounter, the only culture capable of building a better, more just and fraternal world.”

The cardinal urged Catholic agencies and bishops’ conferences to provide fact-based information that will help “dispel many unfounded prejudices and fears regarding the reception of foreigners. Without ignoring the many commitments that such welcome requires, you will also help promote a balanced and positive perception of migration.”

Anna Rowlands, professor of Catholic social thought and practice at Durham University in England, told the conference that Catholic social teaching — which has included teaching about migration since the late 1800s — is about promoting the common good “as a practice, not just a theory.”

A primary resource for theological reflection on migration, she said, is the Bible, which is “a book of migration stories,” stories about the forced or voluntary movement of peoples and of migration as a call from God or a sign of sinful human activity.

In promoting a conversation about migration, particularly in countries where there is increasing hostility toward migrants and refugees, she said, one needs to talk not only about the needs of the people arriving, but also about the disorientation currently experienced by citizens of countries that traditionally welcomed migrants.

In the teaching of Pope Francis, Rowlands said, responsibility for the failure to welcome migrants and refugees does not lie with political leaders alone, but with civil society and all its members who have lost the sense of responsibility for each other that makes a society truly civil.

Carol Batchelor, director of the Division of International Protection for the U.N. refugee agency, told the conference there are 66 million refugees or forcibly displaced persons in the world today — “the highest number ever” — and that a refugee child’s average wait for resettlement is now 17 years, “their entire childhood.”

Faced with such figures and with hyperbolic rhetoric about who those refugees are, “Who wouldn’t be afraid,” she said. Abstractions — just giving statistics, even statistics demonstrating how migration benefits nations — will not help people overcome their fear, she said. They need to hear the voices of the refugees and get to know them.

“Despite all of these challenges,” Batchelor said, by working together, “we can have a collective response that works, but only if we collectively believe it.”

Michele Klein Solomon, director of the Global Compact for Migration of the U.N. International Organization for Migration, said the “single greatest challenge” facing those who assist migrants is “the demonization of migrants and refugees, and this discourse that is so damaging: blaming individuals, labeling individuals as criminals, as threats, as terrorists, as coming to society to try to take social services, to take jobs.”

The truth is, she said, that some 258 million people are living outside their homelands, which is just 3.4 percent of the global population; most of them are not in need of special assistance or protection and they overwhelmingly migrated through safe and legal channels.

The anti-immigrant sentiment has been felt very concretely by organizations traditionally involved in resettlement, including the International Catholic Migration Commission, which for decades helped migrants and refugees move to better lives in the United States or Latin America or Europe.

Walter Brill, the organization’s director of operations, said that through its office in Istanbul, the ICMC was resettling about 7,000 people in the United States each year. “Unfortunately, this has come almost to a standstill” under the Trump administration, even while millions of Syrians remain displaced.

From October through the end of February, the commission managed to resettle only about 100 people, he said.

“It is not enough to complain; we have to appeal to other states to do more,” he said.

NEXT: Vatican conference hopes to ‘hack’ into social issues