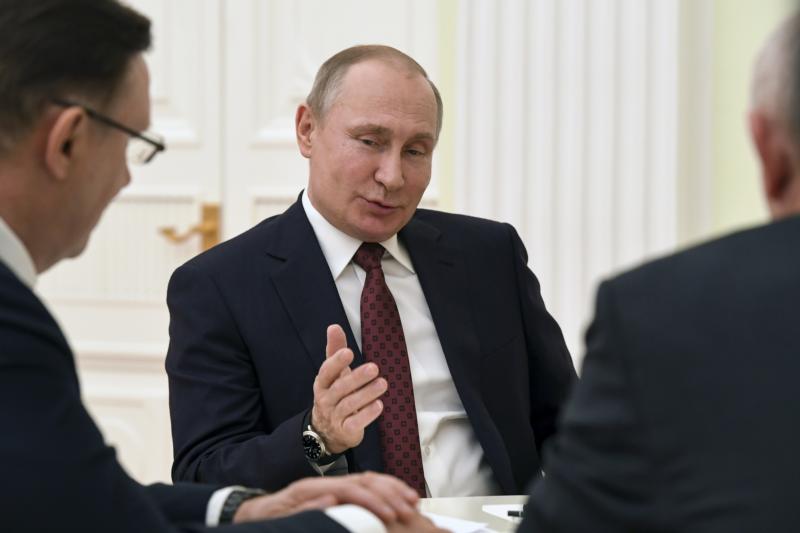 Russian President Vladimir Putin meets with co-chairs of his campaign March 19 at the Kremlin in Moscow. Putin will lead Russia for another six years, after securing an expected victory in the March 17 presidential election. (CNS photo/Yuri Kadobnov, pool via Reuters)

WARSAW, Poland (CNS) — Russia’s minority Catholic Church has pledged to help build a civil society after the nation’s March 18 election and called on President Vladimir Putin to “justify voters’ confidence” after his victory.

“Our church always stresses its readiness to work with the Russian Federation’s secular powers on important issues, such as building a civil society and forming healthy life patterns,” said Msgr. Igor Kovalevsky, secretary-general of the Russian bishops’ conference. “Although we don’t currently face any special barriers to our service on Russian territory, we suffer the same problems as the rest of society with bureaucracy, corruption and the ambiguous implementation of laws.”

In a March 21 interview with Catholic News Service, Msgr. Kovalevsky said Russian Catholics would not “draw political conclusions” from the election, which Putin won with more than three-quarters of votes on a 67 percent turnout. He also said Catholics were not expecting “great revolutionary changes” during Putin’s fourth six-year term.

The head of the Russian bishops’ conference, Bishop Clemens Pickel of St. Clement Diocese in Saratov, told Putin in a March 20 congratulatory message that Catholics prayed he would “cope adequately” with coming challenges and “justify the confidence of voters.”

“Russian citizens representing different nations and religions have entrusted you with the responsible task of being the president and caring for our whole people’s welfare, strengthening peace, harmony and social justice,” Bishop Pickel said.

“Catholics hope for the further development of state-church relations and assure you Russia’s Catholic community is ready to make a realistic contribution to our society’s development, to strengthening its spiritual and moral values, to establishing peace and harmony and fighting against social ills.”

The Organization for Security and Cooperation in Europe said there had been no real choice after the banning of Putin’s principal opponent, Alexei Navalny.

In a brief pre-election message, Bishop Pickel urged Catholic voters to “fulfill their civic duty” and said church teaching encouraged religious believers “to contribute to the public good in the spirit of truth, justice, solidarity and freedom.”

Msgr. Kovalevsky also told CNS that church and Vatican representatives had “worked for many years” to improve conditions for foreign clergy, and he confirmed that hopes were now high that the issue could be “resolved by all interested parties.”

“Unfortunately, the majority of Catholic priests and religious here aren’t citizens of the Russian Federation, and we’ve had constant problems obtaining rights for them,” said Msgr. Kovalevsky.

“Even now, we don’t expect any change in Russian laws. But there are positive signs, especially in our ties with Russia’s Orthodox Church, with whom we’re now cooperating well on humanitarian, charitable and social projects.”

He added that he had no information about the Catholic turnout or how church members had voted.