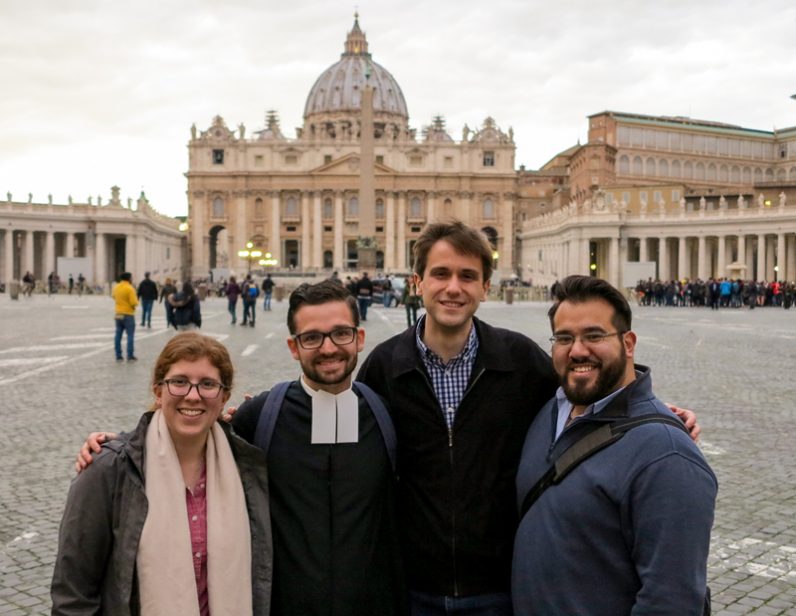 The U.S. delegates to the Vatican meeting March 19-25 also said the 305 young adults from around the world want to see young people consulted more often in their parishes and dioceses. And, one said, in conversations with other delegates, he discovered that Catholics in other countries are not experiencing the sharp divisions that U.S. Catholics are.

The U.S. Conference of Catholic Bishops sent three delegates to the meeting: De La Salle Christian Brother Javier Hansen, who teaches at Cathedral High School in El Paso, Texas; Nick Lopez, director of campus ministry for the University of Dallas; and Katie Prejean-McGrady, a wife, new mother, youth minister, and a popular speaker from the Diocese of Lake Charles, Louisiana.

Chris Russo, a 23-year-old working in Boston, represented the Ruthenian Catholic Church. And Nicole Perone, director of adult faith formation for the Archdiocese of Hartford, Connecticut, represented Voices of Faith, an international group that highlights the contributions of women in the church.

A topic that came up consistently at the meeting, Prejean-McGrady said, was young people’s desire “to find companions on the journey, to look for people to walk with them.”

“When you have personal relationships with people who are vibrantly living their faith, then you yourself are inspired to live your faith,” she said. And the relationship also provides a trusted source for dealing with concerns about topics such as sexuality or church teachings that may be difficult to understand, she said.

Lopez noted that Pope Francis opened the meeting March 19 by telling the delegates that the church wanted to hear their opinions and their questions, even those they thought might make church leaders uncomfortable.

In ministry to young people, they need to know they can ask those questions and that “we are going to discuss them. Nothing is too radical. Nothing is out of left field,” he said. If a young person is struggling with something, that is all the reason needed to discuss it.

“Human issues are church issues, and we aren’t going to get anywhere unless we begin the conversation,” Lopez said.

“Young people seem to live in this age of anxiety, meaning that in a world of seemingly endless possibilities, they are almost paralyzed because they have all of these different options and they want to go forth, but they want to make the right decision, and they want to do so without the fear of failure,” Russo said. “My hope is that just as Christ walked with the apostles, the church will walk with young people as they are discerning all these different thoughts and considering different paths.” 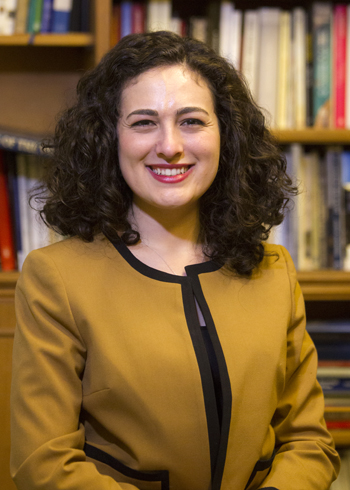 Nicole Perone, director of adult faith formation for the Archdiocese of Hartford, Conn., is seen March 22 during an interview about her experience as a delegate to the Vatican’s pre-synod gathering of young adults. (CNS photo/Robert Duncan)

The accompaniment discussion was key for Perone, who counts herself blessed to have had the guidance and friendship of “a number of people, but especially women, really bright, faithful women who love the church and have dedicated their lives in service to the church.”

The preparatory document for the synod, which will be held in October, talks about “role models, guides and mentors,” she said, but a lot of young people do not know how to ask for such accompaniment, and many people do not realize they can offer that to young people.

Faith mentors to young people, she said, first must be “faithful Christians, people who are living their lives faithfully and are committed to walking the journey of holiness.”

And, she said, “it has to be a person who is not afraid to acknowledge they are human and make mistakes. The words ‘authenticity’ and ‘vulnerability’ have come up constantly this week. Those are the two characteristics young people crave, desire and are drawn to” because they make a mentor both trustworthy and approachable.

The young adults said their experience in Rome — meeting with the pope and formulating suggestions for the bishops who will meet in October — is an amazing, global example of what young people would like to see at least a hint of in their parishes and dioceses.

“All young people within the Catholic Church want to be heard,” Russo said. “They want to have their thoughts expressed as they journey closer to Christ.”

“In the U.S., we’re blessed to have very passionate young adults who take the initiative to form independent Catholic groups for young adults to meet, outside the church and outside the parish,” he said, “but we need to integrate them into parish life to show we are not a separate group, that we’re actually part of that community.”

The delegates spent most of the week in small groups, working on their suggestions for the synod. Brother Hansen said he told his group that “one of the characteristics of the American church is this extreme polarization between liberal and conservative Catholics, and I was surprised that one thing I found was that that is more or less uniquely American.”

The delegates from the wealthy Western nations would talk about “church teaching on controversial issues” or the need to be present on the digital platforms where young people spend their time, but “we have to move beyond these First World problems,” Perone said, adding that she was touched by the witness of delegates coming from places where Christians experience violent persecution.

In the United States, she said, “it’s easy for us to get bogged down in this division and discord and soundbites — all these things that really drive us apart, and we don’t quite focus on the unity we really should be focusing on: the beauty of our faith, the joy of the Gospel, the beauty of the truth that unites us and not the nuances that divide us.”