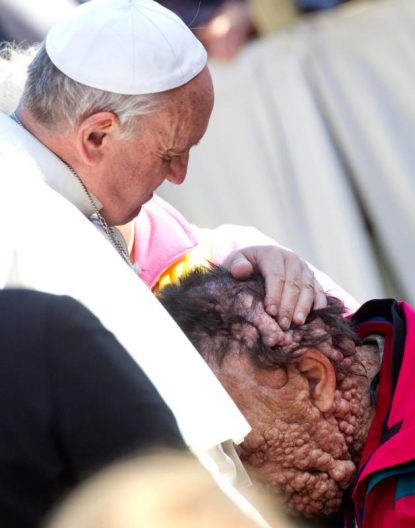 Pope Francis embraces Vinicio Riva, who is afflicted with neurofibromatosis, during his general audience in St. Peter’s Square at the Vatican in this Nov. 6, 2013, file photo. This image was widely seen throughout the world and much discussed. (CNS photo/Claudio Peri, EPA)

WASHINGTON (CNS) — As Pope Francis observes his fifth anniversary as the successor to St. Peter, the gifts and style he brings to the papacy are still felt strongly by American Catholics.

“The Francis effect — whoever coined that, it’s been like a healing salve on a hurting church,” said Lynne Betts of Seaford, Delaware, one of two East regional leaders in the Society of St. Vincent de Paul’s Voice of the Poor program. “I don’t want to sound cliched, but he’s like a good parent who picks you up and dusts you off and says life is still good. He’s been able to do that.”

Rita Sloan, coordinator of the Life, Peace and Justice Commission for the Diocese of Reno, Nevada, has long felt the church could be more vocal on justice issues, and now the church has Pope Francis speaking on the issues of the day.

“Could there be a more wonderful person in the world? I love that man,” Sloan said. “My biggest wonder is why more Catholics are not more outspoken on the issues because we have him leading the way.”

Sheila Herlihy, coordinator of justice and charity for the Church of the Incarnation in Charlottesville, Virginia, spoke of Pope Francis’ call to service.

“I see this service-oriented approach that Pope Francis takes definitely inspires people and affirms people in their ministry,” Herlihy said. “For me, it’s a really great resource, because everyone really loves Pope Francis. Whereas other invitations to service may come off as dry or academic, answering that call “might not be their first inclination,” she added, “but Pope Francis is really helpful for framing the ministries” because he “puts a human, teaching face on it.”

Jacqueline Moya, 19, a student at Dominican University in River Forest, Illinois, who is active in the school’s ministry center working with Hispanic communities, said of the pope: “He’s been wonderful and speaks a lot to millennials.”

The pope has inspired Moya to remain active in the church. “I feel like it would have been up in the air as far as being part of the church,” she said. “He speaks to me. … It drew me closer to the Catholic Church. It brought me closer to my Catholic faith.”

Many people interviewed by CNS during the social ministry conference — with follow-up telephone interviews to some of them — mentioned the idea of how Pope Francis challenges them, but in a way that makes them want to respond positively to the challenge.

“He’s challenging me, too. Am I talking a good talk and not doing it?” Sloan said. “He challenges us to be better versions of ourselves as we do it with our lives,” said Deacon Perry Pearman of the Diocese of Spokane, Washington.

“I will always remember one of the first things he said: He told all the priests and all of the clergy to take on the smell of the sheep,” Deacon Pearman added. “I’m a firefighter and an EMT (in South Pend D’Orielle in Washington, near the Canadian border). I’m also the fire chaplain. I’m right there with people in the worst times of their lives.” Pope Francis “not just challenges us to get out there, but to be more open to their stories they tell,” the deacon said.

The theme of encounter was a recurring thread during interviews. Althea Graham, a member of Corpus Christi Parish in Detroit who is active in her parish’s St. Vincent de Paul group, said: “What I realized, he’s so connected to regular people, not necessarily just the religious, but the common folk.”

Graham added, “When you talk about encounter he’s been about an encounter with people that comes across as authentic,” adding Pope Francis creates kinship, “almost like he knows you.” People speak lovingly about the pope, she noted. “I feel included.”

Tammy Baldauff of Houston said she would be involved in justice issues surrounding American Indians even if it were someone other than Pope Francis in the chair of Peter,  but “the environmental that part of him, myself — as a native American — I really appreciate his stance on that.”

Nor are non-Catholics immune from the Francis effect.

Ethel Higgins, a regional director with Catholic Charities in the Diocese of Raleigh, North Carolina, said she realizes this is a new church which challenges some of the old thoughts about the church, but that it is important to make the connection between young and old philosophies.

“He’s the best thing since sliced bread, as they could say,” she told CNS.