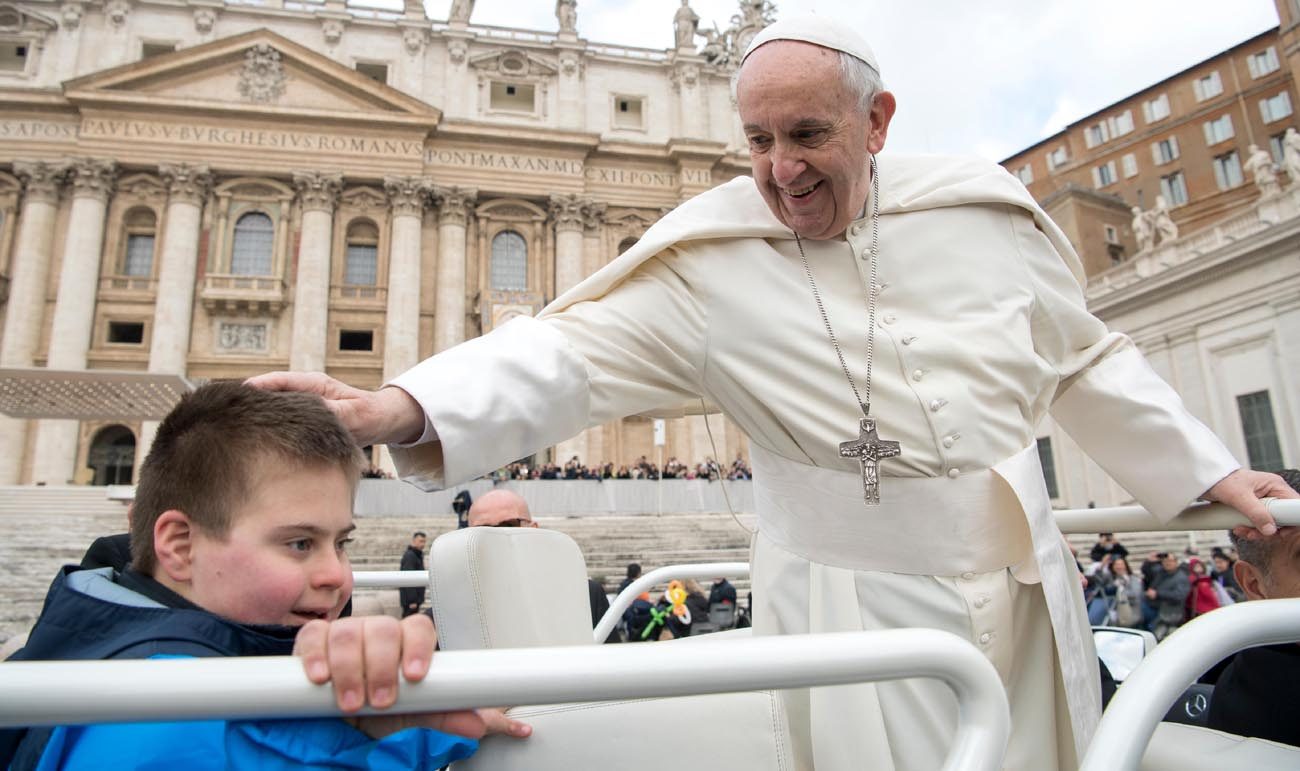 Pope Francis greets Peter Lombardi, 12, of Columbus, Ohio, after the boy rode in the popemobile during his general audience in St. Peter's Square at the Vatican March 28. Receiving a kiss from the pope was a wish come true for Peter, who has Down syndrome and has survived leukemia. (CNS photo/Vatican Media)

VATICAN CITY (CNS) — While many people hope to catch a glimpse of Pope Francis and greet him, 12-year-old Peter Lombardi got something even better than he imagined.

“Not only did Pope Francis kiss Peter, he asked Peter to ride in the popemobile with him,” Brenda Lombardi, Peter’s mother, told Catholic News Service.

Peter and his family were in St. Peter’s Square March 28 for the pope’s weekly general audience, hoping like most pilgrims to get close to Pope Francis.

First, a security guard lifted Peter over the railing of the popemobile so he could get a kiss from the pope. Then Pope Francis told his security detail to give the boy a seat behind him and, together, they circled the square.

“He was gone for like 20 minutes riding with the pope, and the pope kissed him and blessed him,” Lombardi said.

Peter, who has Down syndrome, and his family had been hoping to see the pope in 2015 during the World Meeting of Families in Philadelphia. However, those dreams were dashed when the young boy became ill with leukemia.

While receiving chemotherapy treatment, Peter was watching the papal visit from his hospital room with his family when a representative from the Make-A-Wish Foundation arrived.

His mother said the representative asked, “‘So Peter, what is your make-a-wish?’ And Peter said, ‘I want to be kissed by that man who is kissing all those children on TV,'” Lombardi told CNS.

Along with his wish of greeting the pope, Peter also wished for a lightsaber duel with Darth Vader at Disneyland, a wish the foundation was able to fulfill.

Two and a half years later, after Peter was cured from leukemia, the Lombardi family embarked on a pilgrimage to Rome, Assisi and Medjugorje to thank God for Peter’s healing.

After hearing their story, Mountain Butorac, an American tour guide based in Rome, was able to arrange for the family to stand in the front row to make Peter’s dream come true.

While riding in the popemobile with the boy, Pope Francis was given a balloon shaped into a crown.

Peter said he made one more request in the popemobile.

“(I said), ‘Thank you, pope, give me a balloon,'” Peter told CNS. The pope immediately placed the balloon crown on Peter’s head.

For Peter and his family, the significance of Pope Francis’ gesture wasn’t just a dream come true, but a sign that God had bigger and better plans in store for them.

“That’s how God works, right? We weren’t supposed to see Pope Francis in Philly, we were supposed to see him in the square and Peter was supposed to ride in the popemobile with him. You can’t make this stuff up,” Lombardi told CNS. “So, we thank the Lord for his graces and his mercy.”

PREVIOUS: Pope: Christians may be sinners, but they can’t be corrupt, mafioso